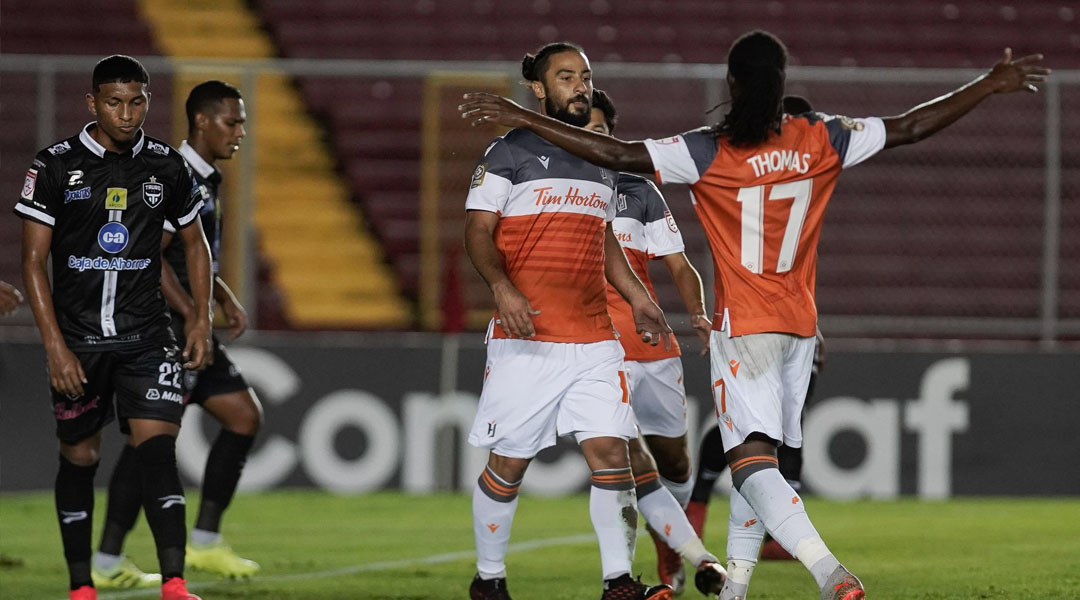 The Panamanian Independence Day clash between Forge FC and Tauro FC unfolded in the nation’s capital tonight, with a less-than-healthy pitch at Estadio Rommel Fernandez hosting a back-and-forth Concacaf League match which saw Forge FC leave it late to secure a 2-1 win and advance to the quarter-finals

Tauro FC fought hard throughout the match, with first half goals from Panama veteran Edwin Aguilar and Forge FC’s Molham Babouli cancelling eachother out to keep the scores even in the first half. The difference came with a 90th minute penalty shot from Daniel Krutzen, who fired home the opportunity to secure a historic win for the visitors.

The result means that the Hamilton-based side has secured a quarter-final berth in the Concacaf League, which is the furthest stage that the reigning Canadian Premier League champions have reached in the continental competition.

It also means that Forge FC now has three separate paths of potential Champions League qualification: they can win the quarter-final after enjoying a stint of time training back home, win a play-in match should they lose that quarter-final matchup, or best Toronto FC in the Voyageurs Cup Final.

Last month, a ten man Forge FC also left it late to best first-timers Municipal Limeno in order to reach tonight’s round of sixteen matchup against Tauro FC. Here’s a breakdown of how the historic match against the Panamanian hosts went down tonight:

Smyrniotis recalled former TFC striker Molham Babouli to lead an attacking line with Kadell Thomas and Concacaf League hitman David Choiniere on the flank, with team captain Kyle Bekker starting in midfield alongside Elimane Cisse and Alexander Achinioti-Jonsson. The back line saw Kwame Awuah get the start on the left, with Daniel Krutzen, David Edgar, and Dominic Samuel forming the rest of the back line ahead of CPL Golden Glove nominee Triston Henry.

The bench was also bolstered by the return of Chris Nanco, who missed the preliminary round against Municipal Limeno through a hamstring aggravation but was declared by Bobby to be fully fit for tonight’s match.

The opening minutes saw Tauro FC probe and stifle most Forge FC movement before the visitors could build momentum, though Cisse did lace off a right-footed shot in the seventh minute which whipped wide of the net.

The reigning CPL champions then began to probe, breaking into the box twice before a smart lead pass from Achinioti-Jonsson saw Choiniere win a footrace on the flank. The Quebecer broke inwards into the box, with his effort deflecting wildly off of a defender right to the feet of an unmarked Mo Babouli. The striker wasted no time firing home a close range effort with the keeper out of position, giving Forge FC an early advantage:

The goal represents Molham’s first-ever continental goal, while Choiniere continues a mightily impressive record in the competition: he now has three goals and one assist in just five Concacaf League appearances.

A Tauro FC counter minutes later saw Edwin Aguilar just barely stray into an offside position, with the attacker supplying the assist for what would have been an equalizing goal for host side. Seconds later, however, Aguilar would make good on a breakaway opportunity to score his sixth Concacaf League goal in seven appearances after smartly turning David Edgar, making space, and blasting an effort right over Triston Henry in the eighteenth minute.

As the back-and-forth action continued through the first half, another blistering run from Choiniere saw the 23-year-old cleverly break free from one defender and dribble beyond a second before firing a shot that was parried out by Tauro shotstopper Luis Hurtado in the 34th minute:

A re-taken corner moments later saw Achinioti-Jonsson ring a header off the crossbar, with mere inches separating the reigning CPL champions from retaking the lead. The 24-year-old Swede secured the title-winning goal of the Canadian Premier League this year, with all three of his previous Forge FC goals coming from set piece opportunities. This time, however, the chance didn’t fall for the midfielder.

The club were reminded not to lose concentration moments later, with Aguilar firing a missile that went wide as the game continued in a back-and-forth manner. As Forge FC gaffer Bobby Smyrniotis said in the pre-game press conference, the club needed to do the little things right tonight.

The forty-fifth minute saw Kadell Thomas taken down by Nino during a one-on-one counter attack, with the Tauro defender receiving a yellow card for the challenge. Prior to the freekick being taken, Colombian goalkeeper Luis Hurtado – who had taken a knock – needed to be replaced by 19-year-old backup goalkeeper Jorginho Frias, with the youngster stepping right into a potentially game-defining freekick opportunity from Forge FC.

Fortunately for the hosts, the resulting set piece struck the wall with the first half ending with each side claiming a goal apiece. At the restart, Chris Nanco would replace Kadell Thomas on the left wing.

The second half nearly opened up disastrously for the visitors when a miscued defensive header from David Edgar flew towards the top of the net, with Triston Henry showing impressive aerial reaction speed to keep it out of the goal.

After a handful of Forge attacks, Aguilar made a great back-post run which just barely saw the attacker miss a lofted cross that came ever so close to giving Tauro FC the lead.

An unbelievable sequence in the sixty third minute would be the stuff of dreams for any young goalkeeper: Frias denied Nanco from near point-blank range not once, but twice in a row to keep the scores level.

The moment of euphoria gave way to the revelation that the 19-year-old may have hurt himself in the sequence of saves, but the substitute goalkeeper was able to stay in the match – which was good for Tauro, who didn’t have a third goalkeeper on the team sheet.

A clever spin move from Diaz saw Edgar concede a foul from a central position just outside the box in the sixty-ninth minute, with the freekick earning a corner that saw Aguilar strike an ambitious overhead kick that went wide of the net.

Aiming to keep the pedal pushed forward, Smyrniotis brought on fresh legs in the form of Anthony Novak (who scored the late matchwinner against Limeno) and Paolo Sabak with less than twenty minutes to go in regular time.

In the game’s dying minutes a low effort from Babouli forced Frias into another save, with the last few minutes seeing both sides stretched out as tired legs allowed for more open space to be utilized by both sides. Diaz came within inches of a diving header three minutes from time, but the 23-year-old couldn’t connect with the ball to produce a last-gasp winner.

Novak then found himself in a one-on-one chance in the final minute, with the Forge FC striker once again producing last-gasp drama: he was taken down by Frias, earning his team a penalty at the last of the match.

Up stepped Daniel Krutzen, who sent the young goalkeeper the wrong way to secure a last-gasp victory for the lowest-seeded team in the tournament!

Forge FC will now face either Jamaican side Waterhouse FC or Haitian club Arcahaie in the quarter-finals, which is the furthest stage the club has made it through its short two years of continental action. The time and date for the quarter-final match are yet to be determined, though the club is guaranteed to be playing as the away team following the a recent structural change to the tournament.

The reigning Canadian Premier League champions have yet to find out when they will face Toronto FC in the Voyageurs Cup Final, too.

It’s a head-turning night of action that will make Canadian football fans proud, with Forge FC now set for a well-earned return home after spending the last 17 days in Central America, where they secured the club’s first-ever continental away wins.