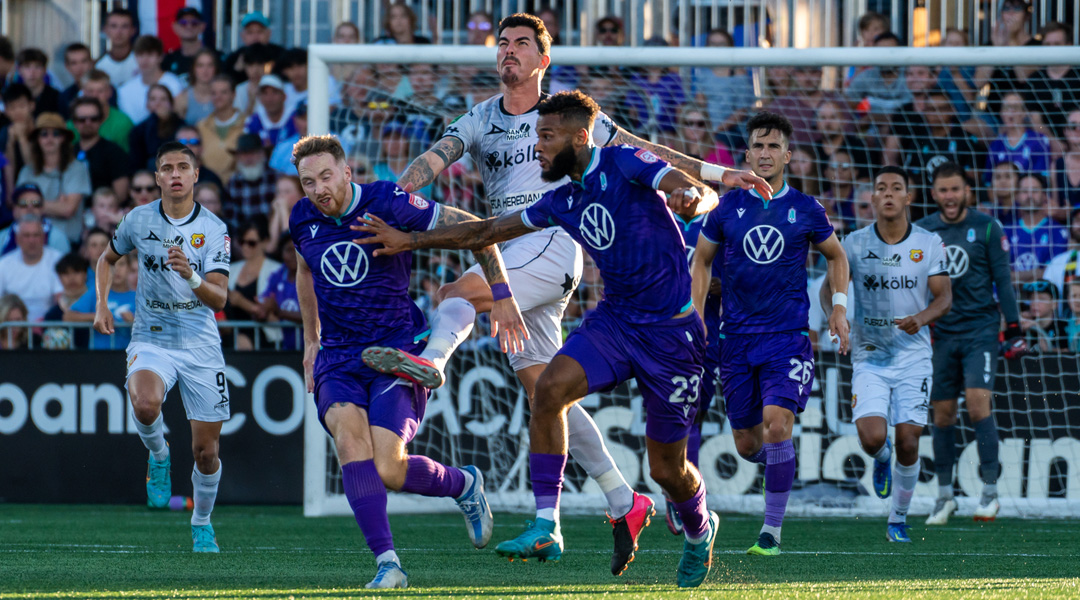 Pacific FC went toe-to-toe with Costa Rican favourite CS Herediano in the Concacaf League Round of 16 last night, falling just short of keeping things level ahead of a tough away trip to San Jose in one week’s time.

The Tridents saw a struck post keep them off the scoresheet in the first half, with a strong second half performance ending with heartbreak after a goal from Jefferson Brenes saw the visitors collect a late win.

After Pacific’s thorough dismantling of Jamaica’s Waterhouse FC at home, the reigning CPL champions entered the match knowing that the home leg carried plenty of weight for their odds of reaching the quarter-final stage. Merriman opted to throw Jamar Dixon behind Aparicio and Young in midfield, with the PFC Captain helping break up the Herediano attack and build counters.

While the Costa Rican visitors showed plenty of individual brilliance on the ball, the hosts were able to limit their serious chances well in the first half as they slowly grew into the match. Douglas Lopez had a strong chance stifled by Irving, while a header from Djenairo Daniels would agonizingly strike the post as the opening half neared its close.

The Tridents continued to probe on counters as the game grew on, with Josh Heard brilliantly running from end-to-end and delivering another opportunity to Daniels, who’s touch let him down on the occasion. The absence of Alejandro Diaz was felt by the hosts, who saw Amer Didic up for several set piece opportunities as they sought to carve out a late winner.

James Merriman also handed Cedric Toussaint his purple debut in the second half, bringing on midseason pickup from York United in a bid to secure a result.

Instead, it was CS Herediano who’d celebrate before the final whistle after a series of defensive miscues allowed a cross to reach substitute forward Jefferson Brenes, who’s downwards header happened to be screened by two onrushing defenders. The ball pinged downwards through Didic and beyond Irving to give the Costa Rican side a crucial away goal just minutes from the full-time whistle.

With some late Pacific attacks being stifled, the match would finish 0-1 in favour of CS Herediano, leaving the west coast side with a tall order next week: playing away in San Jose, they’ll need to put themselves on the scoresheet while stifling the attack from the top Costa Rican side.

“We’re organized, and we just need to push for those goals now,” added Josh Heard after the match. Indeed, the Tridents did little wrong in the execution of their game plan at Starlight, having found themselves punished on the little details. The club has yet to score an away goal in continental action, having come to a nil-nil away draw against Waterhouse earlier in the competition.

Pacific FC will be collecting air miles aplenty in short order, with the club set for a coast-to-coast clash against the Halifax Wanderers on Saturday before playing away to CS Herediano on Tuesday.