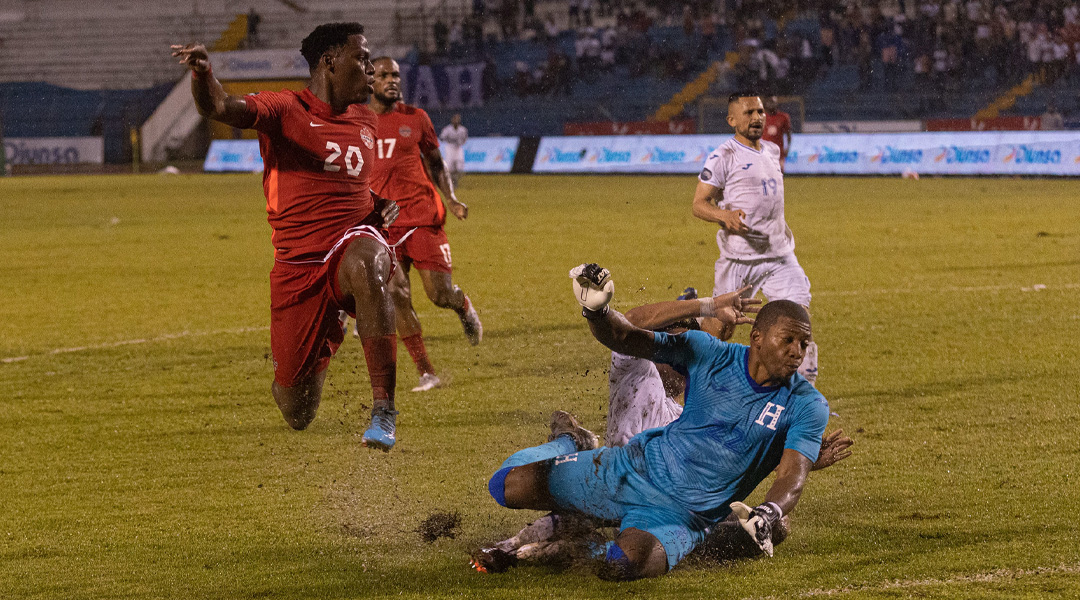 It was a night to forget in Canada as Les Rouges fell to a 2-1 defeat away to Honduras in San Pedro Sula, with the team battling pitch conditions, the opposition, and their own frustrations.

An early goal from Kevin Lopez was compounded by Kervin Arriago late in the game, with Jonathan David carving one back before with Alistair Johnston got his marching orders at the very end of the match to end a wet, miserable night for the squad.

The waterlogged pitch at Estadio Olimpico Metropolitano made things difficult for both teams, with soggy patches of the pitch halting the ball’s momentum. Still, it took the hosts just 13 minutes to get the go-ahead goal, with Arriago finding himself free in the box to smash one home beyond Borjan.

Now one goal behind, the Canadians made no small effort to carve their way onto the scoresheet, with Davies and Buchanan swapping flanks as Herdman wasted little time making adjustments. Still, it seemed the Canadians were much slower to adapt to the pitch conditions than Honduras, who played a more fruitful direct game despite being out possessed by the visitors.

Canada also struggled not to let the waterlogged pitch impact the side defensively, with Steven Vitoria, Alistair Johnston, and Junior Hoilett all going into the referee’s pocketbook in the opening 45 minutes of wet, slippery action.

The second half would see both sides fairly limited, but it was the hosts who would grind out an insurance goal with eleven minutes to go: with a counter up the flank, Minnesota United man Kervin Arriaga darted into open space before burying the shot on the far side of the net, with Milan Borjan just about an inch away from making the save.

The Hondurans gave Canada a glimpse of hope after a bizarre free kick from yer hosts saw the ball whip back into their own half. Canada pounced on the opportunity in fluid fashion, with Jonathan David bagging one back for the visitors by dinking home a well-placed through ball.

Despite the door cracking open for an unlikely comeback, it would be a frustrating end for the World Cup-bound Canadians: a clearance with a studded collision from Alistair Johnston earned the defender a second yellow in the 94th minute, and despite a flurry of pleas from his teammates the red card would stick.

It wasn’t a pretty game from either side, but Canada certainly came out worse for the wear: the team collected no less than eight yellow cards, with Les Rouges unable to deal with the chaotic circumstances of a match that was so watery that Junior Hoilett even slipped on the run-up for a set piece.

Herdman acknowledged that the team simply weren’t able to grind out the result on the night, but remained confident that Canada will bounce back from a frustrating night in Concacaf. The Canadians had opened their Concacaf Nations League Group account with a comfortable win over Curacao, resting in second place now that the international window has concluded.

The coverage of the match also included an important note from Kristian Jack, who implored for a larger sense of unity between the Canadian soccer community after what has been a difficult month, calling on fans and media alike to keep following the team when it’s not in the spotlight of making World Cup history.

The Canadians will be playing in a tough group against Belgium, Croatia, and Morocco for their first World Cup stint since 1986, with Nations League action not resuming until next March. For now, the team will simply want to put last night’s performance in the rearview mirror.