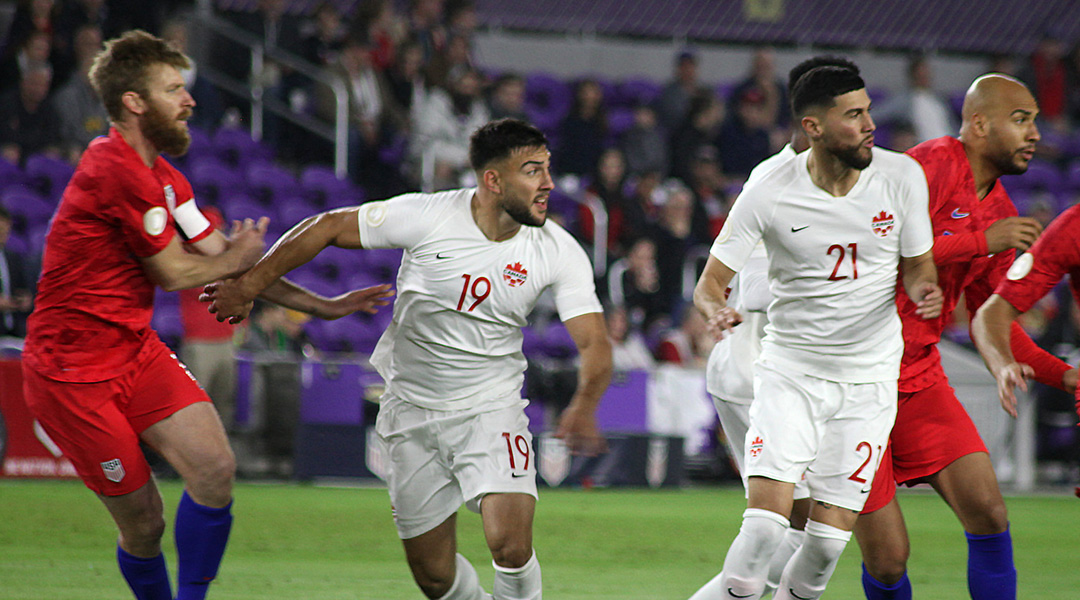 When Canada secured a 2-0 win over the US last month to snap a 34-year winless streak against its southern neighbours, it likely encouraged many Canadian fans to tune into tonight’s match hoping that Les Rouges could secure a result against the USA for a second time and cement the country’s unresolved spot in the Hex.

Unfortunately, it wasn’t meant to be: head Coach John Herdman made a tactical gamble by re-deploying Bayern Munich youngster Alphonso Davies as a left-back, but a sloppy first-half performance from the defensive line set up the match to finish 4-1 in favour of the USA.

The last time Herdman started Davies as a left-back, the country bowed out of the Gold Cup in a shock 3-2 loss to Haiti. The decision to start Davies in that position once more is sure to be a point of contention among Canucks who tuned into the match.


Things got off to a bad start for Canada when a loss of possession from Davies resulted in a set piece for the USA, who put in a quick cross that found Jordan Morris wide open to give the US the lead in the game’s second minute.

Davies transitioned to the right side of the pitch as the game progressed, but found himself in the midst of trouble yet again when he was forced out of possession. A quick transition play allowed for a quick cross to find Gyasi Zardes running free of Doneil Henry in the box, with Zardes then knocking a close-range head home to double the USA’s lead.

Things got worse when Les Rouges conceded a freekick in the 34th just outside the box, with set pieces once again being the Achilles heel for Canada. The ball went beyond both Vitoria and Henry to find an unmarked Aaron Long, who’s free header flew to the bottom left corner of the net beyond Canadian goalkeeper Milan Borjan to extend the US to a 3-0 lead.

Davies’ bad night continued when he conceded an unnecessary indirect free kick a few feet out from the Canadian net when he juggled the ball and flicked it to Borjan with his head, who handled what was technically a backpass with his hands.

In the ensuing scramble of players in the box, Borjan would receive a yellow card as he disputed the decision, with both Scott Arfield and Doneil Henry being required to get him to back down before he picked up a second yellow. This time, Canada would be able to defend the set piece.


The second half would see the US continue to dominate from the get-go, with Sebastian Lletget missing a close effort early into the second half. The Canadian defensive line continued to find itself giving away plenty of space to USMNT attackers as Herdman continued to push forward his full-backs to offer his forwards some depth out wide.

As the second half wore on, a long-awaited debut finally occurred for Canada: Stephen Eustaquio took to the pitch for the first time as a Canadian international, with the former Portugal U-21 coming on for Mark-Anthony Kaye in the 62nd minute.


Ten minutes later, substitute Junior Hoilett fired a rocket of a volley that was responded to by an even more spectacular save from US and Atlanta United goalkeeper Brad Guzan. The resulting corner would see Arfield’s corner flicked on by Osorio, with defender Steven Vitoria then getting his head to the ball to snatch one back for Canada.

Despite a nice late-game effort featuring the ‘blood, guts, and thunder’ that Herdman had called for, the USA wasn’t done scoring yet: Zardes collected the ball to strike a first-time effort that deflected off substitute Derek Cornelius to give the USA a decisive 4-1 win over Canada in the CONCACAF Nations League.

Ultimately, the USA were simply able to convert their chances, but the onus will be on the Canadian squad for allowing so many individual mistakes to led to those chances. To Berhalter’s credit, his tactics lead to quiet nights for the likes of Jonathan David, Lucas Cavallini, and Jonathan Osorio, who were rarely able to get time on the ball.


Fans will also question why Herdman toyed with a defensive lineup that secured a clean sheet against the USA last month, but there was more to Canada’s loss than a 19-year-old who had a bad defensive game: the entire defensive line put out a shambolic performance, with players caught ball-watching and allowing the USA to exploit zonal defensive miscues all throughout the game.

Whether tall, in-form Canadian Premier League defenders like Amer Didic and Dominick Zator could have made a difference is more food for thought, too.

They came out strong. We knew that, we wanted to match that. That [first] goal hurt us a little bit, but you know what, we didn’t come here with five defenders. We didn’t come here to park the bus. We came here to face a great American team like we did a month ago. You know, there’s a lot of lessons to be taken from here, and we’ll learn from that. One night isn’t going to put into question all the work that’s been done this past year or so. We’ll be back in March and in June to get this job done.

In any event, the loss means that Canada’s spot in the Hex is far from safe. If Canada can’t keep the spot by the time next June arrives, it’ll make the road to the 2022 FIFA World Cup much more difficult for the team.

While Canada remains top of the CONCACAF Nations League Group A for the moment, it is likely that Les Rouges will lose the spot when the USA completes its last game of the group against Cuba on November 19.

For the USA, fans will feel that the result has restored the status quo. For Canada, the result is a stark reality check that as great as the country’s offensive lineup is, it still has a lot of work to do to match that growth in other areas.