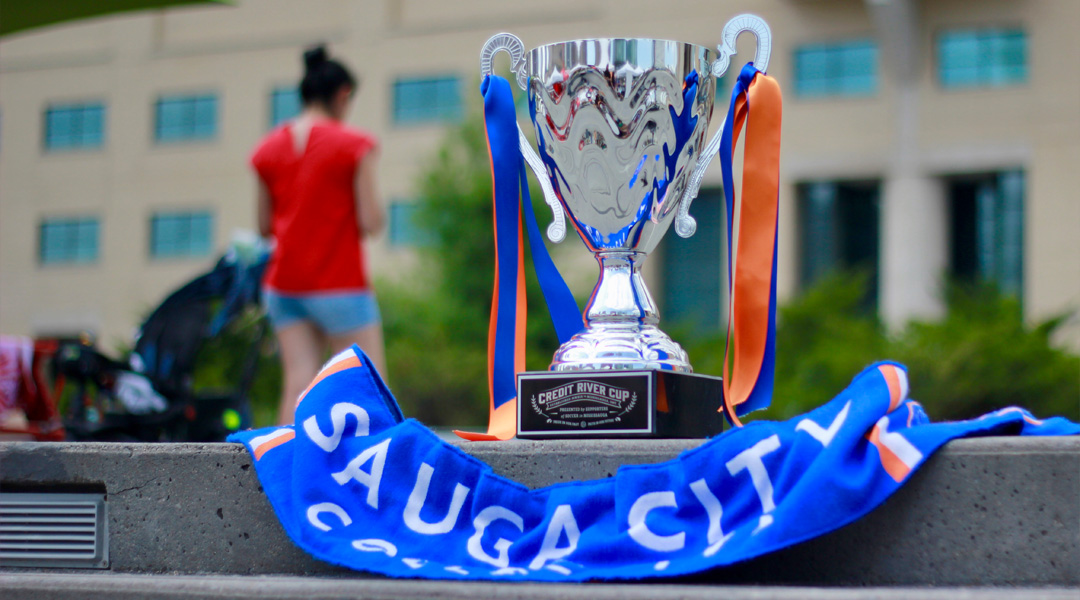 The winner of the 2021 Credit River Cup will be decided in a clash between North Mississauga SC and Sigma FC this Thursday, with an affiliated Sauga City Collective fundraiser having hit its funding goal ahead of the decisive match.

The fan-made trophy was announced in 2019 as the result of a collaborative effort between Mississauga football supporters aiming to help grow the game at the grassroots levels, though they’re hopeful to eventually see a Canadian Premier League team land in the city, too.

The 2019 League1 Ontario season saw the Credit River Cup awarded to North Mississauga SC based on a the club’s head-to-head league results against Sigma FC and ProStars FC. NMSC secured the cup in some style following a hat-trick from Adel Rahman, who finished the season as a League1 Ontario All-Star and now plays for 1812 FC.

With the ProStars now committing to Brampton, the 2021 Credit River Cup is being decided through two regular season matches between local sides North Mississauga SC and Sigma FC.

The first leg saw Sigma FC procure a 2-1 win over NMSC in August, with first half goals from Mateo Marques and Mohamed Alshakman being enough to stave off a second half resurgence that saw Lee-Victor Massunda pull one back for the current Credit River Cup holders.

The second leg of the competition will decide the cup winner and will take place on Thursday, October 7 at the Paramount Fine Foods Centre Fields. A win or a draw will be enough for Sigma FC, who enjoy a strong feeder club link to the CPL’s Forge FC.

Fans who attend the match will be able to take photos with the trophy, which will be awarded to the overall winner after the match.

Related: Click here to watch a full replay of the first leg of the cup.

The 2019 edition of the cup raised $1,000 for the Big Brothers Big Sisters of Pool, with the Credit River Cup initiative helping drive donations by allowing supporters to have their names engraved on the cup itself.

The Sauga City Collective has been raising money for local charities since 2017, with this year’s edition of the Credit River Cup raising funds for the Wasa-Nabin program of the Indigenous Network, which is a self-development program for urban Indigenous at-risk youth from the ages of thirteen to eighteen.

While the $1,000 funding milestone was hit within 48 hours of the campaign’s announcement, donations to the program made through the Credit River Cup are still being accepted. Interested fans can donate here.

Fans who donate $5 and up will be automatically entered into a raffle, with each increment of $5 donations accruing more chances to win. There are pairs of CPL tickets for grabs, along with a pair of tickets to a Canadian Championship semi-final along with passes to a group tour of Stonehooker Brewery, too.

Any donation of at least $30 will earn the entrant six raffle tickets plus an exclusive limited edition Inaria x CRC bag.

The Credit River Cup is named after the river that flows through the Peel Region, connecting its cities and towns together. The name Mississauga itself is derived from the Anishinaabe word for ‘those at the great river mouth’.