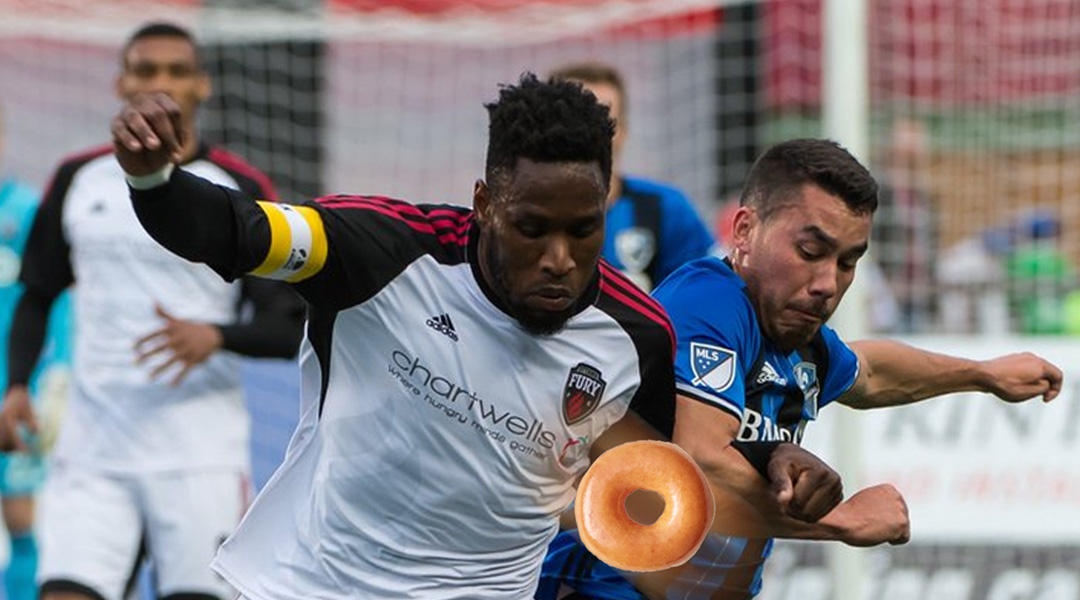 This Friday, former Canadian pro soccer player Eddie Edward put out a plea to his followers: did anyone in the Ottawa area know where one could get a Krispy Kreme donut? He sounded desperate. There were siren emojis. This was a man on a mission.

So, we had to get to the bottom of the proverbial doughnut hole. Eddie was kind enough to to dough-nate some of his time (I’m so sorry) to explain his sudden doughnut emergency.

Q: Okay, what’s with the Krispy Kreme cravings? Did you just discover the brand?

A: I was craving some junk food yesterday and a friend of my wife’s, who lives in another city, coincidentally posted a box of Krispy Kreme donuts left at her desk for her birthday. Ever since we saw it we’ve been insistent on Krispy Kreme! It’s all her fault.

A: Oh wow, I’m not even particularly a donut fan, but we did have a donut wall at our wedding – I realize that sounds like we are huge donut fans. These donuts were special flavours and colours made for us by Maverick’s, so I’d have to say those were my favourite.

Editor’s Note: Eddie Edward is definitely a donut fan. Man had a wall. To be fair, Maverick’s does look delicious though.

Q: When was the last time you had Krispy Kreme, anyway?

A: I honestly don’t even know. Maybe as far back as when I was in college in the US, which was at least 10 years ago!?

A: I don’t drink coffee with my donuts. I do heat up my donuts in the microwave before eating them though!

Editor’s Note: this is a pro move. This guy donuts.

My usual is a french vanilla from Tim Hortons, but recently on a trip to Hawaii we found a local vanilla macadamia nut blend that is the best thing on Earth, so we had to bring some home.

Q: So now that you know Krispy Kreme can sometimes be found at Costco, do you have a membership card yet? Are you on your way there now!?

A: We called Costco. They only have them there twice a year or so which doesn’t happen to be now! We’re already members. Someone actually saw my post and is driving home from Montreal tonight and offered to bring us back a dozen from the store – so, all good!

There you have it, folks. Eddie Edward: 100% a huge donut fan (he says he isn’t, but c’mon). Thanks to a well-timed Good Samaritan from Montreal, he and his wife should have their Krispy Kreme cravings under control for the next little while.

After that? Well, Ottawa may not have Krispy Kreme, but Maverick’s and SuzyQ are pretty darn good alternatives.