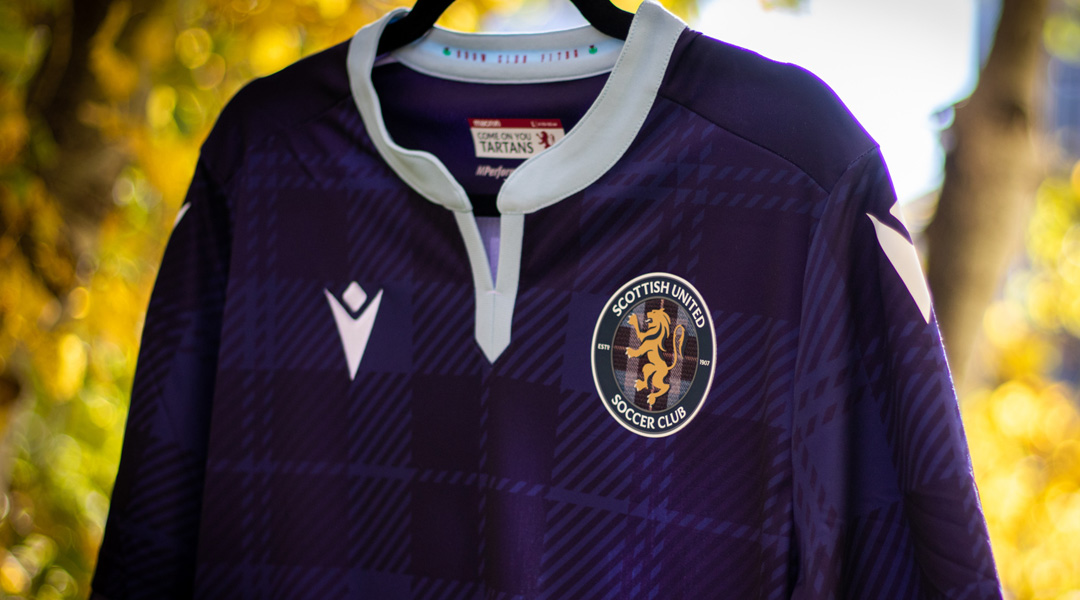 Alberta-based soccer club Edmonton Scottish United has turned heads with new Macron kits that have, it seems, raised the game for the looks of Canadian clubs operating outside of the professional level.

Macron has already cemented itself in Canadian football history after partnering with the Canadian Premier League for its launch in 2019, producing the league’s kits for each year running. They’re certainly no strangers to clubs in semi-pro and developmental circles here, either.

Edmonton Scottish United partnered with Macron during a gorgeous club rebrand to weave a beautiful navy blue tartan kit (we know, the photos look purple) with a white collar and side stripe that sports a supportive ‘ Come On You Tartans’ along the inner nape, the club’s motto of ‘braw club fitba’ on the inside collar and, of course, plenty of lion imagery.

It’s a sight to behold:

The new Edmonton Scottish United kits offer a great look at Macron’s work at a more grassroots level, with the Alberta-based club boasting a strong history of youth club development for players aged 5-19 while its amateur adult teams have seen the women’s side win the Women’s Jubilee Shield at the national level some nine times before.

The away look swaps the primary colour to polo blue, with an Edmonton Scottish Society tartan pattern complimenting the sleeves and a lion taking a central spotlight along the front of the kit itself. Entitled ‘Rampant Lion’, it certainly stays true to its name.

Both kits feature an ode to the late Chris Kooy, who led the club to its first championship in 2016 but tragically passed away after a battle with cancer in 2020. The club has also announced that it has retired #20 in his honour.

While the club’s new look has made some waves, they aren’t the first Canadian side that Macron has used a tartan design on this year: the alternate look for the Halifax Wanderers features a trim based on the Novia Scotia tartan that shows up on the cuffs and collar.

There’ve been plenty of head-turning kits showing up outside of the professional level on Canadian soil, too, with this year seeing Peterborough’s Electric City FC reveal a gorgeous map-based kit design for its inaugural season.

While the kits aren’t quite as purple as we initially thought, it’s still been a great week for the colour: Pacific FC reached playoffs for the third straight year, while PLSQ side FC Laval lifted its league trophy to earn a berth in the 2023 Canadian Championship.