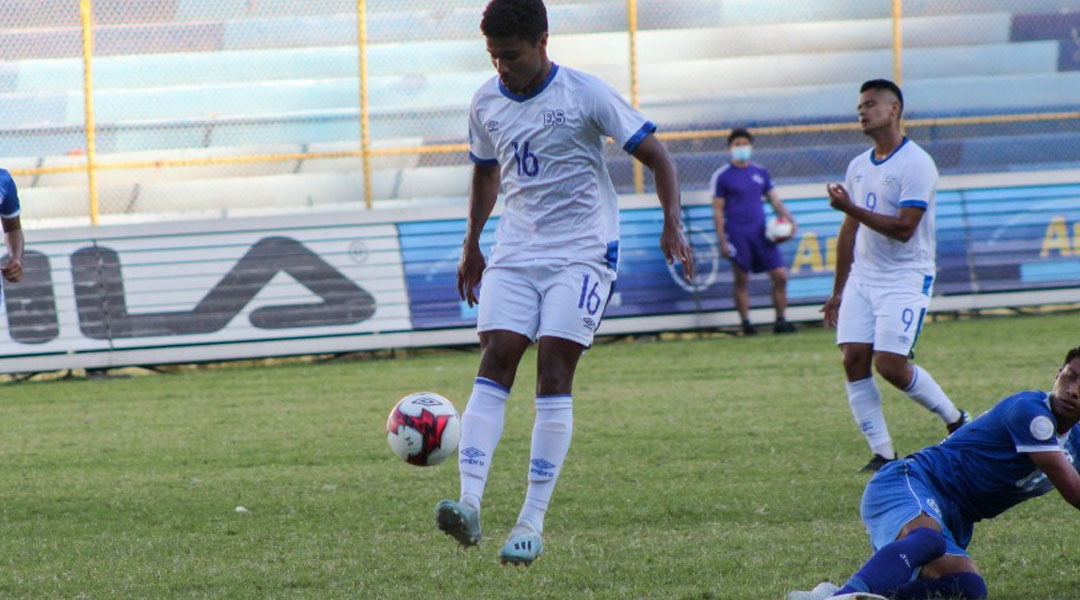 Yesterday, FC Edmonton striker Marcus Velado-Tsegaye stepped onto the pitch at Estadio Cuscatlan for the El Salvador U-20 national team, making his first youth appearance for La Seleccion in a 2-2 draw against Nicaragua.

The youngster came on in the second half after El Salvador found itself 2-0 down against Nicaragua, helping the club rally back two goals against their opponents to finish the friendly match with the scores level. While he didn’t get on the scoresheet himself, he’ll have another opportunity tomorrow when the friendly match is replayed.

We spoke with Marcus about his decision to accept the call-up last month, where he revealed that he was testing the waters with El Salvador after Canada decided not to hold any national team camps. Born in Edmonton to a Salvadoran Mother and an Ethiopian Father, he’s eligible to play for three countries, though it’s only Canada and El Salvador who are openly contesting for his services.

The Canadian camp did reach out to the youngster, informing him that he would’ve been called up to a U-20 camp if it had been put together. While Velado-Tsegaye’s aspirations to make the Canada U-20 roster have been quite public, El Salvador scout Hugo Alvarado took advantage of the opportunity to reach out to the Eddies striker and confirm his eligibility for La Seleccion instead.

Yeah, I’m going to test it out and see the level over there, and if I do fit in. That’s the main reason for me going. Of course, with being cap tied to the senior team, I’m doing more thinking about that. Once I play with one country, it’s that country [forever]. I think if I feel that I can fit in with the team and it’s best for me, then I can see myself playing for El Salvador.

His big choices aren’t limited to the senior level: he’ll face a youth team selection choice ahead of the delayed Concacaf U-20 Championship. El Salvador youth coach Ernesto Gochez states that Velado-Tsegaye is a part of the team’s plans for the tournament, which was scheduled to be played this summer but was ultimately delayed due to the COVID-19 pandemic.

El Salvador finds itself in the same group as Canada for the Honduras-based tournament, with Mexico and Aruba rounding out their group. With both nations originally scheduled to play the group’s opening match, one can presume that Marcus will be immediately competing against whichever team he ultimately snubs when the tournament resumes in 2021.

For now, the FC Edmonton youngster is simply focused on staying sharp in the country’s capital. This was the third friendly match that the El Salvador U-20 team has played in the long camp, having beaten Honduras 1-2 on two occasions a few weeks ago. La Seleccion will be playing a repeat friendly match against Nicaragua tomorrow, where it wouldn’t be surprising to see Velado-Tsegaye feature once again.

Back home, Marcus Velado-Tsegaye opted to re-sign with the Eddies for at least another year, though he made it no secret that he has long term ambitions that stretch beyond the CPL. The youngster has made 22 appearances for the Alberta-based club in all, scoring his first goal on his 18th birthday and his second at The Island Games earlier this year. Highly touted by Eddies brass, he’s been the biggest returning player announced this offseason – though new head coach Alan Koch suggests that there’ll be plenty of new faces joining him.

The El Salvador U-20 team will take on Nicaragua at Estadio Cuscatlan this Wednesday for a second friendly match.