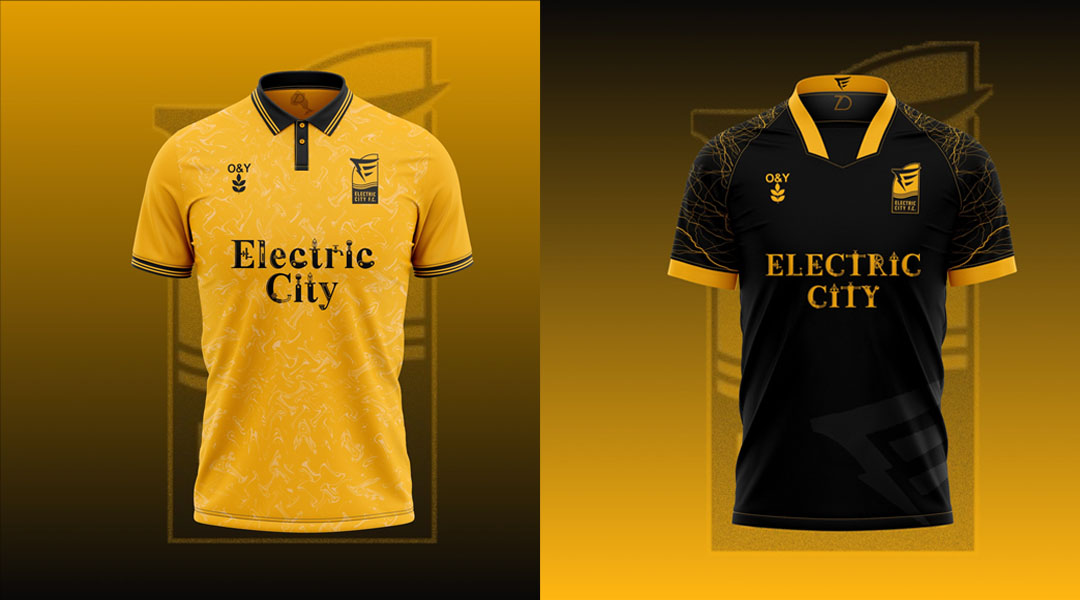 While Peterborough’s Electric City FC was only announced just under two weeks now, the club has already impressed with its professional demeanor, an ambitious ownership group, and the success of its marketing and media outreach thus far.

With the club logo having turned a few heads for its sleek design, perhaps it’s no surprise that Twitter user Zephyros Designs took a crack at some concept kits for the prospective League1 Ontario side.

The result of their work was a home and away kit combo that would be sure to turn heads, though of course it’s worth repeating that these are completely conceptual works of art from South African designer Zephyros Designs, who has no affiliation with ECFC but enjoys making concept kits aplenty.

Without further ado, let’s delve into their concept art for Electric City FC:

The home kit sports a sharp-looking black collar atop a yellow kit with subtle water patterns awash over the front, with Zephyros Designs paying a nice homage to the London Street Generating Station, which saw its first hydroelectric plant built in 1915. It all comes together for a sharp looking, with a very retro-shique fuse player number and the concept even honouring DJ Wimalasurendra, a Sri Lankan engineer known as “The Father Of Hydroelectric Power”.

Zephyros Designs didn’t stop there, with the designer releasing an away kit in a follow-up post, too:

And of course how could I do a concept for @ElectricCityFC without bringing electricity into the mix.Presenting my away jersey concept for the club sporting electric sleeves and a faded crest at the bottom.@olive_york used for display puproses, but they are needed in Canada ? pic.twitter.com/CT5XzoEX1z

It’s no surprise to see electrical arcs featured here, with the sleeves featuring a nice pattern of them before a clean cut to a sleek black front and inspired typography of the club itself where a sponsor would go. It also sports a faded crest at the bottom, too.

All-told, the home and away kits look incredibly sharp, and Zephyros Designs did a good job playing homage to both Peterborough and the theme of the club, too. Custom kit producer Olive & York retweeted the design concept, describing it as a “10/10”.

Electric City FC confirmed that yellow and black would be its colours of choice when it was first announced, with Club President Rob Jenkins stating that the colours represented the hard-working, industrial heritage of Peterborough while also separating the side from other local teams like the Petes or the Lakers.

The club has been busy since its announcement, opening up an online store and even working with the City of Peterborough to prominently display the team along hydro posts in the downtown core. The team is hoping to join League1 Ontario next season, launching a men’s team in 2022 and a women’s team in 2023. Jenkins has also made it clear that the local ownership group has intentions of joining the Canadian Premier League as soon as 2024.

The club has announced that a stadium announcement is expected in the coming months, though fans hoping for roster or coaching announcements will likely need to wait until the club actually joins League1 Ontario for the 2022 season.

Whatever happens, things are certainly starting well for the club: the ownership group’s sharp marketing has put the club off to a hot start, and it’ll be interesting to see what other building blocks are put into place as the side powers up.