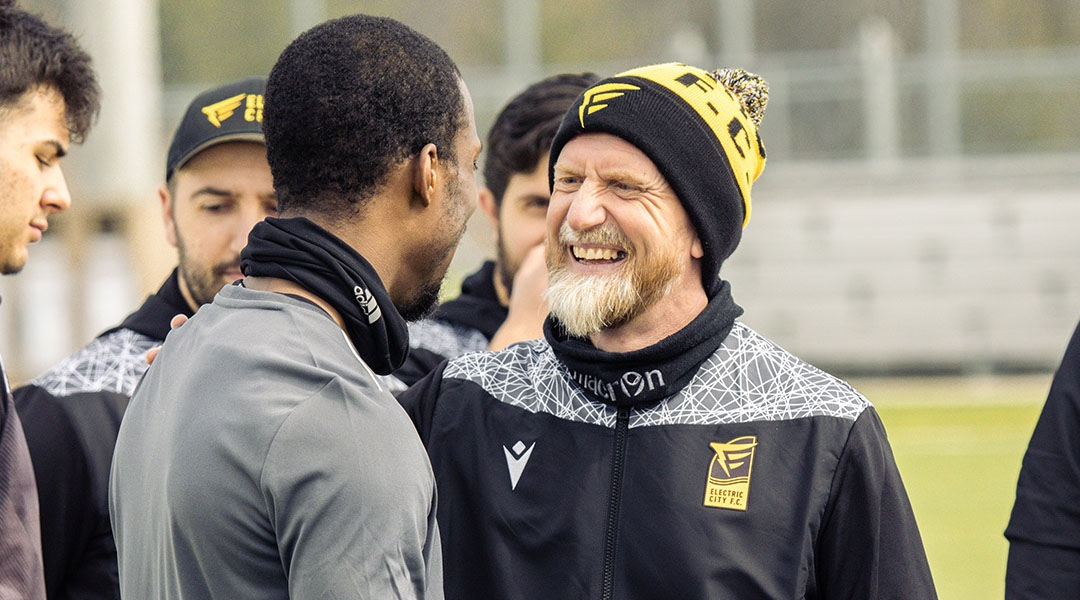 League1 Ontario side Electric City FC has named Jamie Sherwood as the side’s first men’s head coach. He arrives after having most recently been the head of football at the Cardiff and Vale College in his native Wales.

The Peterborough-based side had initially appointed Michael Marcoccia to be its first head coach, but he departed due to personal reasons. Instead, Sherwood will now have the honour of being the League1 Ontario expansion side‘s inaugural men’s head coach.

While he’ll be coaching the men’s side of the game in Peterborough, Sherwood arrives with a bevy of high-level women’s game experience to his name: he coached the Cardiff City Ladies FC first team from 2003-2005 and 2012-2014, helping the squad win the Welsh Cup, be runners-up in the Premier League and Premier League Cup, and reach the FA Cup quarter-final stage.

Following his time in Cardiff, he joined Yeovil Town as the women’s team head coach and enjoyed four successful years with the English side, which twice won the FA Womens Super League 2 Club of the Year award along with a title win that saw them promotion to the top division. Sherwood won the 2016 Somerset Sports Coach of the Year award for his contributions.

All-told, he arrives as quite a pickup for the League1 Ontario level. He’ll also help assist the women’s team, and is set to work with youth players from the Peterborough community.

“We are very pleased to have attracted a coach of Jamie’s calibre to our project and are excited to see what he can do with the talented group of players we have assembled,” stated Club President Rob Jenkins. “After an extensive search we believe that Jamie is the right person to lead this project forward. He has had success in Europe at a very high level in both the men’s and women’s game which was very important to us and he bought in to what we are trying to do with this project right away.  I am confident the players and the community will get behind Jamie to deliver something special in Peterborough.”

The new gaffer seems eager to join a project that sees him build the side from its inception, which certainly isn’t something that one expects to happen in their coaching career.

To be integral to the shaping of a culture, environment and game model is a huge reason why I have been drawn to Electric City FC. Creating an elite environment that allows players to flourish and to produce performances that will bring the community together is such an exciting proposition

Electric City FC’s new head coach also has coaching experience with the likes of Taffs Wells FC, Barry Town United AFC, and Bridgwater United. He was a member of the Wales FA technical staff from 2003 – 2010, during which time talents like Gareth Bale and Aaron Ramsay broke through the ranks.

“What you will see from a Jamie Sherwood group of players is a dedicated group that is committed to the values of the club,” he states, “our approach will be honest, hardworking and will mirror the hard working city we find ourselves in.”

Sherwood went on to elaborate that he envisions the team as a side who will play on the front foot both in and out of possession, attacking with creative intent. Given that the side has inked a number of professional level players like Zach Ellis-Hayden, Jordan Brown, and Jordan Webb, it appears he’s got all the tools he’ll need to cement this identity.

If all goes according to plan, the Peterborough-based side hopes to launch itself upwards to the Canadian Premier League level in the near future.

“This is a wonderful opportunity for everyone to shape a club, but I know there is also a lot of work ahead of us and I am eager to get onto the training ground to start working with the players,” he concluded.

Both the Simcoe County Rovers and Electric City FC seem poised to be the tough new clubs on the block, making similarly ambitious signings and both having to replace their initial head coach picks, too.

The inaugural Electric City FC season will see the side travel to reigning champions Guelph United on April 21.