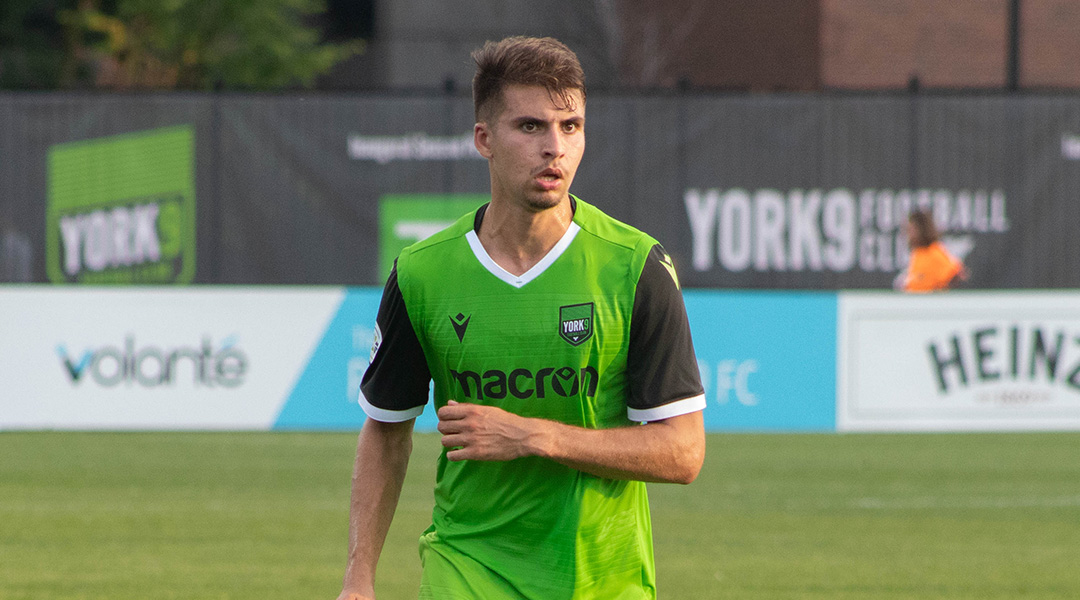 Zambazis terminated his contract this weekend, which means that the Nine Stripes now have 22 players on the books. Following his departure, the midfielder put out an Instagram post on Sunday night wishing the squad good luck, with his former-teammate Morey Doner (among others) commenting that Zambazis will be missed. York9 FC has yet to formally announce his departure.

Emmanuel got his first start for York9 FC on July 17, leaving Nine Stripes gaffer Jim Brennan full of praise after a strong performance. The midfielder would go on to make four appearances in total for the Nine Stripes, and even stated he was ‘happy to stay’ a month ago after turning down a return to university to stay on with the professional team.


Things have evidently changed in the last few weeks, with Zambazis now deciding to move on from the Nine Stripes. It’s not clear what the 22-year-old intends to do next: having only completing a single year of his post-secondary education at York University, a return to school could certainly be on the cards. Alternatively, he could be hoping to get more professional playing chances elsewhere.

Prior to being selected by York9 FC in the second round of the CPL-U SPORTS draft, the 22-year-old had accumulated some professional experience playing overseas in Greece with Iraklis FC, where he made 9 appearances between 2015 and 2016 before the club dissolved as a professional team due financial troubles following relegation.

Whether Zambazis was on a developmental contract or a professional one will determine whether he’s eligible to return to U SPORTS action for the York Lions this year: a professional contract would make him ineligible for a year, but a developmental contract would allow him to have played after the August 15 deadline and return to U SPORTS without penalty after leaving the CPL. Of course, that’s assuming Emmanuel intends to return to university.


York9 FC is going through a rough patch of late: after a blowout victory over the Halifax Wanderers in late July, a two week gap in playtime would see the club play four matches in August without a win, with Zambazis only featuring in one of them. Emmanuel’s departure leaves the club with one extra player slot, though it’s not known if the Nine Stripes will try to fill it with a free agent at this stage of the season.

When the 2020 Canadian Premier League season arrives, the club will need to have three domestic U-21 players on its roster as per league regulations. By the next year none of the club’s current players will count, so perhaps Emmanuel’s roster spot can help towards that. Of course, it’s not known if the roster size limit will change next season, despite York9 FC striker Rodrigo Gattas saying plenty of CPL roster rule changes were on the way.

Wherever Zambazis ends up in the future, he got to take part in an exciting and historic time in Canadian sports: the inaugural season of the Canadian Premier League marks the beginning of an era where Canadian talent can train and play in a professional environment that emphasizes giving its domestic players opportunities. Zambazis evidently didn’t have enough, so it’ll be interesting to see what the 22-year-old does next.

Update: It appears Zambazis intends to return to university.