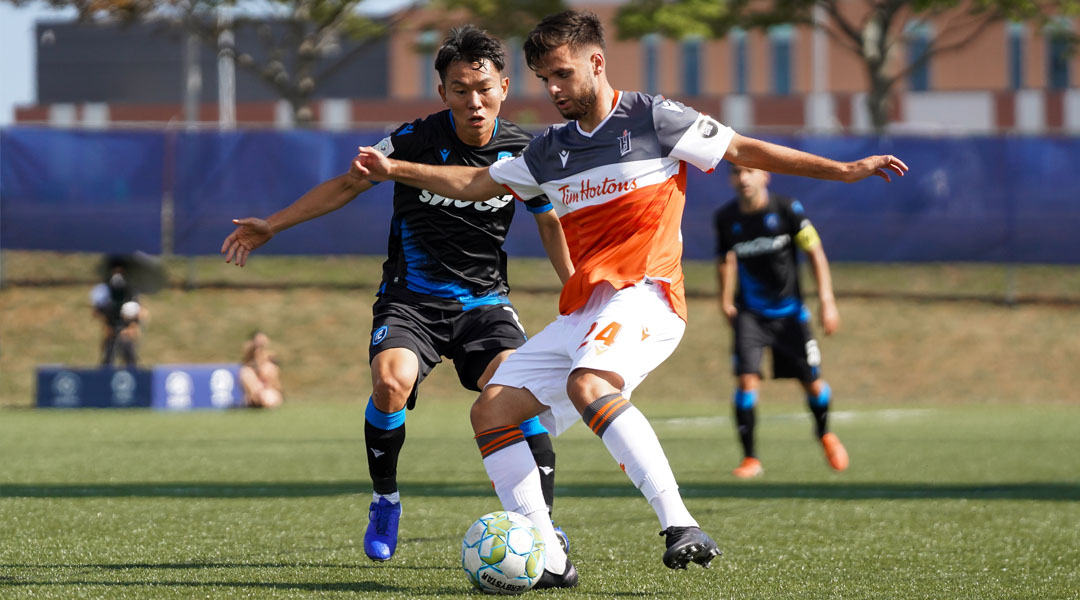 The Eddies would succumb to a 2-0 defeat to Forge FC, who remain level with Cavalry FC at the top of the table. While both sides had a handful of opportunities, the Eddies will feel unlucky not to have scored after having struck the woodwork twice.

Early goals have been frequent in CPL action, and this match was no different: former NYCFC midfielder Kwame Awuah fired home a well-placed looping shot from outside of the box to give the hammers an early lead. It was his first goal for Forge FC, with the go-ahead goal also keeping his side level on points with rival side Cavalry FC.

After a slow start, the Eddies would find more time on the ball and prove capable of some steady buildup, but lacked the final touch needed to score in the first half. A set piece opportunity for the Eddies would see a header from six-foot-four Amer Didic strike the post, with Easton Ongaro rarely having a sniff of the ball throughout the first half.

Didic had trialed with MLS side Vancouver Whitecaps during the offseason, but would ultimately re-sign with the side in March.

Former Sacramento Republic attacking midfielder Kevin Aleman would come close to equalizing for the Eddies in the first half’s final minute after fighting his way into the box, seeing a cross deflect back to him, and delivering a awkward shot that Triston Henry could collect without issue.


Ongaro’s best chance of the match would come early in the second half after he received the ball from Erik Zetterberg and curled a shot just wide of the left post. The striker would be replaced by Tomi Ameobi minutes later, with Kareem Moses replacing an injured Amer Didic, and Toronto FC loanee Terique Mohamed replacing Son Yong-chan for his CPL debut.

A resurgent Eddies side would strike the post for a second time on the day when a freekick from Zetterberg found Moses, who’s first chance of the match pinged off the crossbar. The rebound found its way to Aleman, who couldn’t provide a finish on this occasion either.

Moses would eventually find the net in the third minute of added time, but unfortunately it was in the circumstances of an own goal: A Maxim Tissot set piece saw the ball heading fast towards Anthony Novak, with Moses unfortunately redirecting the ball beyond Eddies goalkeeper Connor James to seal the result for Forge.

As the final whistle sounded from referee Carly Shaw-Maclaren – who completes her first CPL game as first official – Forge FC would ultimately take the win. The result keeps the side level with Cavalry FC on both points and goal difference, while the Eddies will be hoping their dry spell from 2019 isn’t due to resurface.

FC Edmonton will now have until Thursday to prepare for the only Al Classico match of the regular season. Forge FC will have one less day of rest, with the reigning champions set to take on the Halifax Wanderers this Wednesday.

Prior to those games, the Canadian Premier League will resume action with York9 FC taking on Pacific FC at 8:00PM this Tuesday, with the league quietly switching the fixture to an evening time slot.