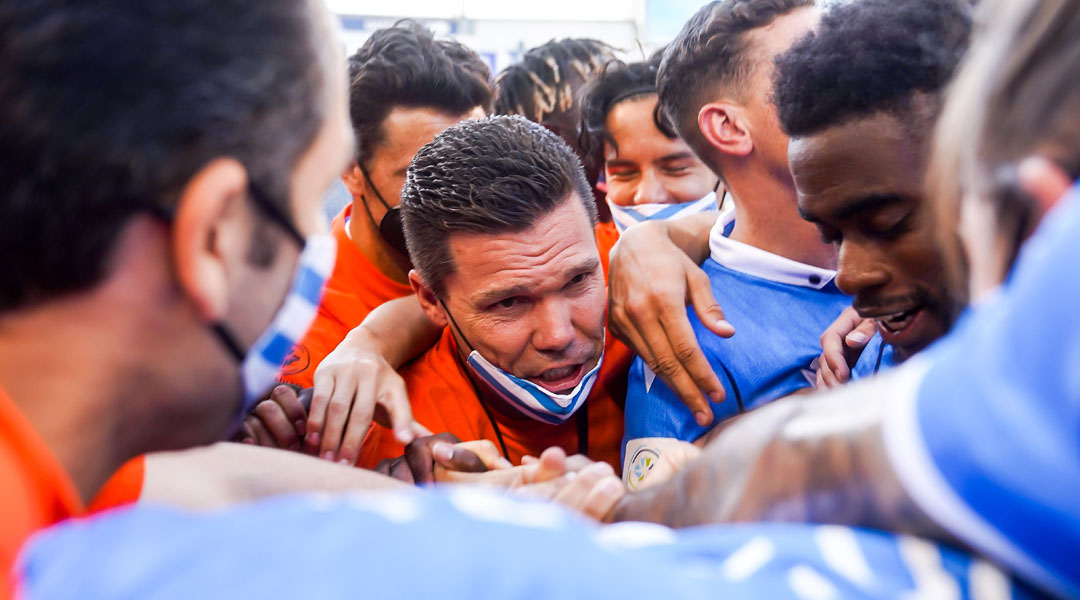 If someone tuned in without knowing how last year went for the Eddies, they might have been surprised at the emotions on display: from a big team celebration following Soria’s breakthrough goal to Esua falling on his knees in jubilation after punishing an off-his-line Triston Henry, the celebratory mood was palpable.

Given that FC Edmonton went winless in last year’s shortened season, the club had gone some 624 days without winning a match in the Canadian Premier League. Tonight’s result was nearly two years in the making, and new Eddies head coach Alan Koch wanted to dedicate it to those who have stood by the club through the hard times:

Tonight’s victory really, to be quite frank, it’s for the entire club. It’s for the supporters, it’s for our the owner, it’s for our partners, it’s for everybody. It’s been two years since our club has been able to celebrate a victory, so tonight’s a very special night. I hope everybody back in Edmonton is enjoying it.

While the gaffer describes the night as a euphoric moment for the team – whom he reminded press had sacrificed time away from their families to be part of this bubble – he also ensured fans that the club wouldn’t be getting carried away. As he puts it, they’re not going to get too high with this win, just like they didn’t get too low with the loss on Saturday.

While the club looked good in its season opener against Atletico Ottawa, a late goal from Viti Martinez won three points for the other team. Edmonton had looked the more likely to score (with an xG of 2.25 compared to Ottawa’s 0.76), and felt the extra sting of seeing a former Eddies goalkeeper put in a good shift against them.

That element of doubt goes into your head obviously, but [tonight] it’s amazing to see them being able to celebrate a victory together. Hopefully that will galvanize the group even more than we have already. It’s a tight group. They’re willing to sacrifice for eachother. Hopefully we can build on this victory tonight. We stayed true to what we’re trying to do.

FC Edmonton made six changes from its season opener, relying on fresh legs to really bring the match to a Forge side that, more or less, had no season preseason at all.

In an interesting parallel, both he and Forge boss Bobby Smyrniotis made mention that the bubbled start to the season was a belated preseason of sorts for each of their clubs, given that local health restrictions meant that neither side had been able to host competitive friendlies ahead of the 2021 CPL season.

I haven’t seen all of my players play yet, we haven’t had a preseason. We haven’t had any other games. Saturday and tonight were opportunities for us to play as many guys as we can, and we’re going to use all eight games here as a pseudo-preseason, even though we’re playing for three points, we need to give these players an opportunity to show what they can do, because to be quite frank I haven’t even seen everybody play yet and I think that’s the right thing to do.

The win sees FC Edmonton move up to fifth place in the table, resting on a positive goal differential for the moment. Neither of the club’s prior two campaigns saw the team finish with a positive goal difference, but if the Eddies can keep on creating chances at a similar rate as their opening two matches, the club may be moving on to brighter pastures.

For Koch, he wants the players to grow hungry for more of these moments.

Moments like that are very, very special. We had one special moment now together as a group, but we want to have more. We have that type of vibe at the end of the game, it galvanizes the group more and makes you more motivated to go out and have more successful moments.

With the club now enjoying highlight performances from returning players like tonight’s goalscorers Ramon Soria and Jeannot Esua, along with fresh faces like Roberto Avila, Fraser Aird, and Tobias Warschewski making an impact, the Alberta-based side is proving to be an interesting one to watch for the 2021 Canadian Premier League season.

FC Edmonton now has three days to prepare for another challenge against York United on Sunday, which could prove to be an interesting affair for former Nine Stripe Kyle Porter.