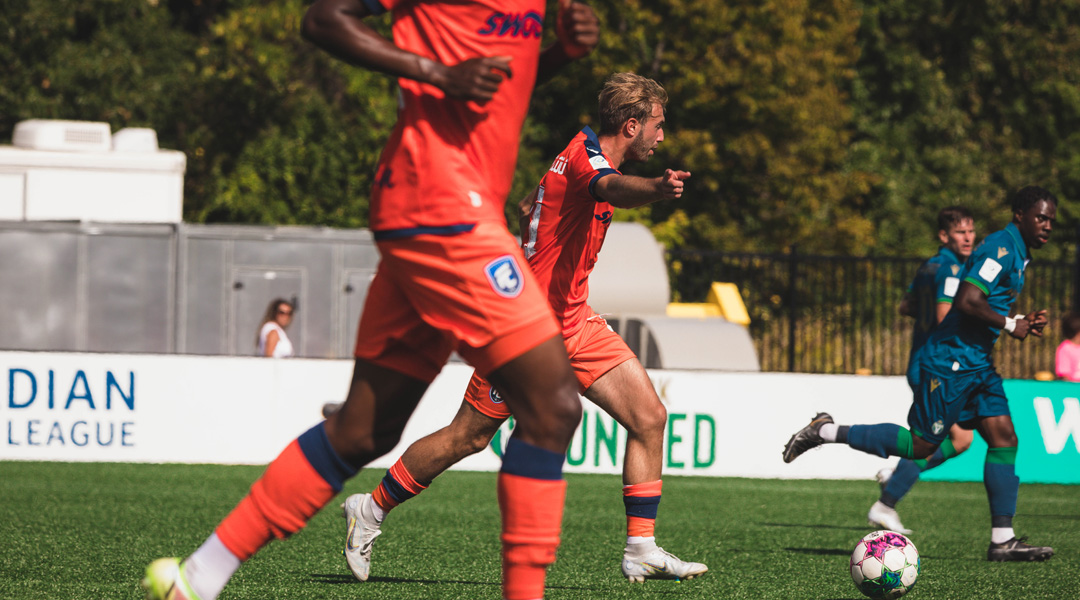 FC Edmonton’s fourth Canadian Premier League season has seen them enter survival mode, with the club entering without an owner and on a minimal budget. A rag-tag squad mostly comprised of intra-league loanees has been accompanied by a rotating roster of coaching staff led by Alan Koch, and while they’ve proven to be fairly competitive on the pitch, the results haven’t come – and that’s now landed them as the first team to be mathematically eliminated from playoffs.

The club’s Sunday afternoon draw with the Valour FC – capped by an improbable miss in the final minute – now means that even a string of perfect results in their last seven matches wouldn’t see FC Edmonton reach postseason heights for the first time.

Tonight’s draw has seen the club procure an unenviable record of two wins, six draws, and thirteen losses through a campaign that sees the side dead last in goal differential. The club had brought in no less than fourteen players on loan this year, a feat only made possible by a league exemption for their extenuating circumstances.

There was some pathetic fallacy to FC Edmonton’s plight at the season’s start, with snow, extreme winds, and torrential rain accompanying the dedicated spattering of fans who filtered into Clarke Stadium. The club had to wait until summertime to enjoy its first win, one of only two procured so far. Barring the shortened Island Games season, that’s presently league record.

Perhaps worse is that the club still remains unable to prepare itself for the future in terms of contract negotiations whilst its ownership situation is still being sorted out. After undergoing a near-total roster overhaul last year, having to undergo it all again for the few players fully contracted to the club is no small feat, with only two U SPORTS commitments presently locked in.

“That’s the difficult part of this project for me personally, is that almost since the very beginning since I’ve got this job I haven’t been able to plan with the people around me,” stated Koch last month. “That’s part of what we would all like to do and what we all need to do in order to set us up for success.”

While the club has attracted a potential investor who is familiar with an executive from another club, the paperwork for Tom Fath’s successor remains unsigned for now.

There is silver lining to be found in the fairly competitive side that Koch has assembled, however: they’re actually outscoring both York United and the Halifax Wanderers, showing great competitive spirit against the odds.

Wesley Timoteo is one of the frontrunners in the league for assists, and behind him no goalkeeper has made more saves than Toronto FC II loanee Andreas Vaikla. Gabriel Bitar has proven to be a highlight-reel capable midfielder, while last year’s assist leader Tobias Warschewski still looks like an astute CPL talent and, perhaps, a goal of the season contender, too.

Still, the squad’s overall inexperience is clear: they’ve dropped more than sixteen points from a winning position, and that significant chunk of table fodder has now sunk any unlikely chance of a playoff appearance. For a team many thought would get blitzed 4-0 or 5-0 weekly, however, they’ve certainly made a decent account for themselves.

That is to say, FC Edmonton isn’t giving away those points cheaply: the seven other CPL sides have always been well-tested, though Edmonton has struggled to stay in the match for a full 90. When one side loses enough of those battles, the war tends not to end in one’s favour.

Last season saw the club become the second team to be eliminated from playoff contention after Atletico Ottawa, with all but two faces from that roster departing in the time since. The year prior, they went winless in a shortened season before parting ways with Jeff Paulus. It goes without saying that the CPL era has been a tough go for the most historic side in the league.

What happens next remains uncertain: while the young league has never seen a club fold, that still isn’t outside the realm of possibilities. Should its ownership situation remain rudderless, it’ll be a tough fifth campaign even if the club remains under league-run status.

For now, Alan Koch and his squad of never-say-die Eddies will aim to keep marching on and do they best they can, even if they’re now mathematically eliminated from playoff contention. As the gaffer has put it, they’ll fight to the bitter end, if that’s all which awaits.