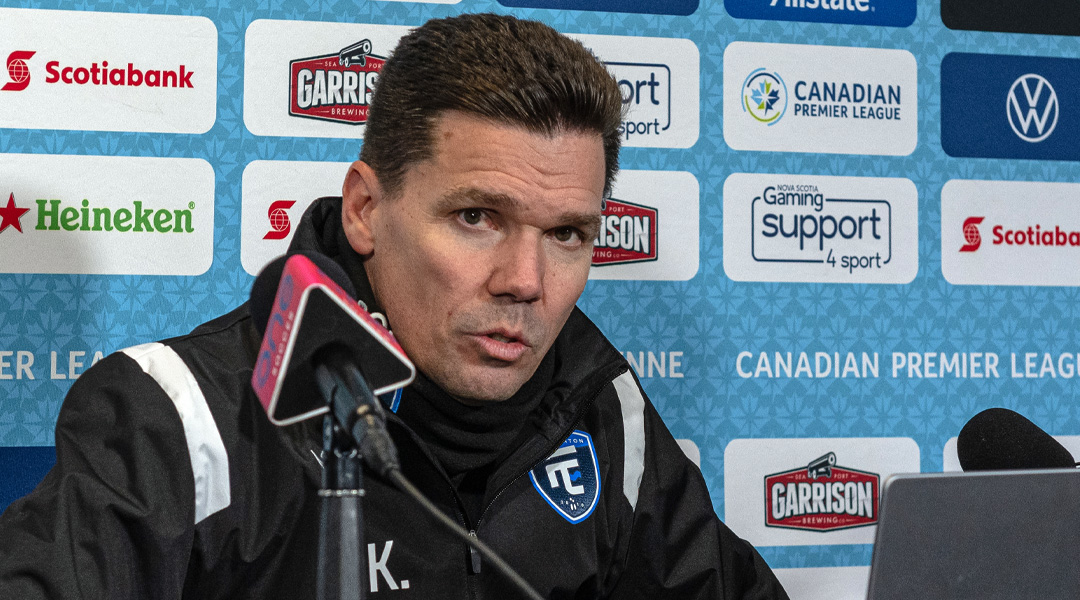 It’s early days yet, but FC Edmonton slipped down to seventh place yesterday after a 3-1 loss to the Halifax Wanderers.

The match – Halifax’s home opener – also marked the third game FC Edmonton had played in seven days, with plenty of travel (some 12,804km overall by air) when all is said and done. The club travelled to from Edmonton to Hamilton for game one, back to Edmonton for game two, and then all the way out to Halifax for yesterday’s game against the Wanderers.

Speaking with media after the match, Koch wasn’t afraid to let the league know that he wasn’t pleased with how things were scheduled.

“We speak factually about it: three games in seven days, travelling east, then going back and then playing the team that’s winning the league mid-week, and then having to fly here [to Halifax]…to be quite frank, we shouldn’t be playing games like this with this schedule. That scheduling is completely inappropriate and unnecessary. It should be significantly improved. No team in this league should have to go through what we’ve gone through.”

As if the travel schedule wasn’t brutal enough on paper, Koch revealed that 36 hours prior to kickoff the team was stuck at Toronto Pearson Airport with players forced to sleep on the ground. With the club operating on a minimal budget while the league seeks out a new owner, the squad isn’t exactly travelling with a lot of added comforts.

“Throw that into it, and we’ve got a lot of reasons why we weren’t quite at our best,” continued Koch. “Having said that, the game was there for us. To score early and allow them to come back in, we’re a little disappointed with how how the second half and the result went.”

While Koch didn’t mention it, the next trio of Eddies matches will occur in a similarly-tight eight game window: the team hosts Cavalry FC on May 6, then plays the reverse fixture in the opening round of the Canadian Championship midweek. After that, it’s off to face reigning champions Pacific FC on May 14. Across a span of 22 days overall, that’s a match every 4.5 days on average, though the second trio of them will have significantly less travelling than the first.

Thus far the club has lost both of its away ventures, but remained resolute while at Clarke Stadium: it has held Valour FC, York United, and Pacific FC to draws, with the underdog Eddies showing a level of competitiveness that has taken many spectators by surprise.

“This is our fifth professional game together, we didn’t have a lengthened preseason like other teams,” said Gabriel Bitar after the match. “We’re still trying to get to know eachother and our chemistry is still growing. We have a special group with a lot of talent, and I feel like once we figure it out we’ll be a very good team.”

The club is mostly comprised of loaned talent, and recently added Haitian midfielder Bicou Bissainthe to its roster. The side also adding youngsters Kelsey Egwu and Malik Sylvester to U-18 developmental contracts this weekend.

With seven days to go until Edmonton is set to host the first Al Classico of the season, one imagines some very tired legs will get some much-needed rest as the team returns back home.