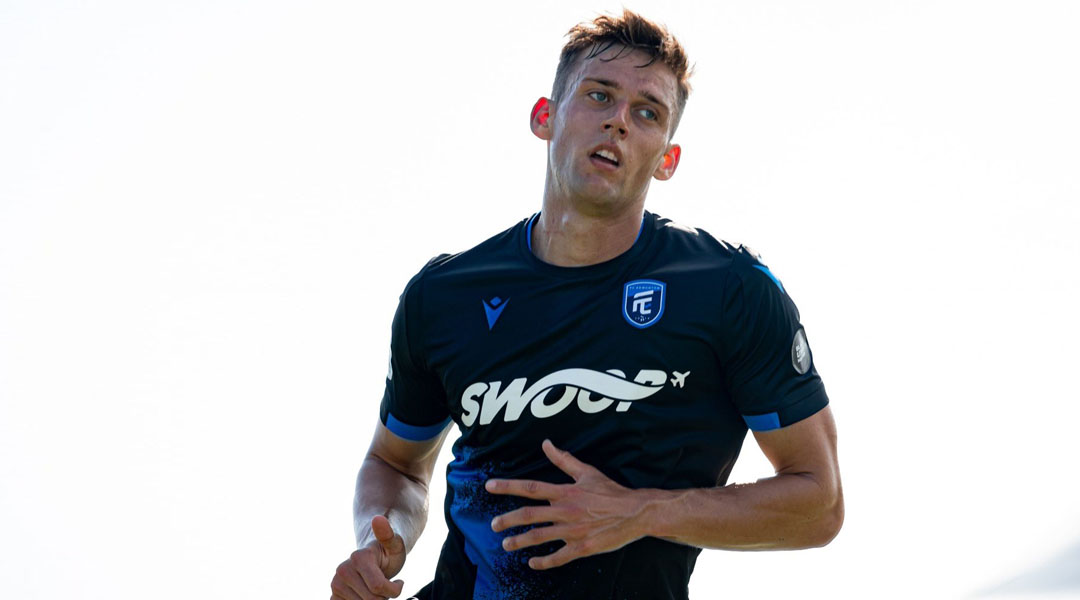 When FC Edmonton announced that centre-back Amer Didic would be returning to the club two weeks ago, the announcement was met with much fanfare: the six-foot-four Canadian international has proven to be a key piece of the FC Edmonton roster, and there had been speculation that, like last year, he might trial with an MLS side before considering an offer from the Eddies.

The Eddies talisman revealed that he actually had multiple MLS trial offers on the table, but a combination of the COVID-19 pandemic and the closing of roster spots in the Canadian Premier League made him believe that the best option was to retain his roster spot sooner rather than later, get starting minutes, and win something with FC Edmonton.

While Didic says he will always want to play at highest level possible that he can, he likes the vision brought in by new head coach Alan Koch, who states that the club must play catch-up to remain competitive with the other seven Canadian Premier League teams after a winless Island Games campaign.

Arriving alongside Koch is new Club President Eric Newendorp, who revealed that he wants to see the Eddies hoist the North Star Shield within the next five years. Koch, meanwhile, says he hopes fans can see the structure of what they’re trying to do in the upcoming season, noting that success won’t be immediate.

Didic, meanwhile, has far higher expectations for the near future:

The goal right now is to get it this year, as it should be. Obviously, you do need to be realistic. In five years, that’s a good time length. We’re starting from pretty much almost scratch in terms of the roster, so that’ll play a big role, but I’m very confident that Alan and the staff can pull us together and get us ready to win it this year. That’s the only thing on our minds, or on my mind. I want to win something! I was in two finals in the USL and didn’t win it, so I want to win something.

While the expectation of challenging for the title may turn some heads, it’s not unwarranted: last year saw the Halifax Wanderers follow a last-placed season with a CPL Final appearance in the next season after undergoing a roster shuffle that saw sixteen players depart.

Didic states that this year’s FC Edmonton roster is also starting from almost scratch, suggesting that the ten Eddies who have re-signed with the club so far are likely most, if not all, of the returning faces. Thus far, the only confirmed player departures are Dylon Powley and Edem Mortsi, though earlier comments from Marcus Velado-Tsegaye also indicated some hefty turnover was still to be announced.

As for the coaching staff, it was confirmed yesterday that assistant coach Sean Fleming has also left FC Edmonton.

While there’s plenty of new faces yet to be revealed at Clarke Stadium, Didic states that he’s very happy with the core group that Koch has retained for the 2021 Canadian Premier League season:

The past few years we’ve retained a lot of the same players, and the results speak for themselves. It’s been different in terms of the roster turnover, keeping some of the guys is crucial. Having a good core is crucial to any club, and I feel like that’s what we have this year. With the additions we’ve brought in, and there’s a lot of them, it’s looking good.

Didic made specific mention that he’s very comfortable with a defensive line that includes returning defenders Mele Temguia, Jeannot Esua, Ramon Soria, and Allan Zebie, stating that the quality is certainly there, but perhaps that tactics weren’t at the right level over the past two campaigns.

With club medicals starting tomorrow, the six-foot-four defender says that he’s recovered from the ankle knock that saw his Island Games campaign cut short. The injury occurred in the season opener against Forge, with Didic missing out on most of The Island Games before forcing himself back in for the two final games of what ultimately became a winless campaign. The injury, it turns out, was worse than it had first appeared.

We didn’t know how torn it was. We knew it wasn’t fractured because did an x-ray that night, but coming back it turns out I completely tore my ATFL ligament, another ligament was partially torn, and then I have a big bone bruise which hurt the most.

Didic has been left dealing with some persistent swelling, but noted that his mobility, stability, and strength all came back. When we checked in with a former team doctor for the Pittsburgh Steelers, he stated that if players demonstrated functionality of the ankle, it wasn’t uncommon to have players return to the field carrying ligamentous injuries, though he noted that they often take longer than a few weeks to fully heal.

While physically being sidelined was one thing, the defender had found it mentally hard to sit on the sidelines as the rest the Eddies roster were still fighting and competing. Didic felt like he was personally letting them down.

It was a bummer to be out the first game with such a small tournament. That’s your whole season right there, but I stayed positive and did what I had to do. I talked with the trainers, we had a conversation with the doctor, and I was lucky to be cleared enough to play the two games there which was awesome for me mentally, but it’s definitely something to forget.

While varying stages of lockdown after the Island Games didn’t make his recovery easier, Didic maintained his fitness knowing that he was on the shortlist for a potential national team call-up. On the day FC Edmonton announced his return, the news also broke that John Herdman requested his presence with the national team in this month’s Florida-based camp, alongside fellow CPL athlete Marco Bustos.

I think it proves the fact that people are watching. The staff is watching. It should be a motivating thing, especially for the young guys in the league and the guys who want to make the national team. This league has so much potential, and I’m excited for it, especially for the population in the future where having a place to play can be a stepping stone. That benefits the national team program with players playing at a high level. Even if you are at this CPL level, there’s proof by these last two years that you can still play for the national team and there’s living people who can prove it. I’m proud to be one of those people, and hopefully I can continue to be a part of it.

Didic is confident that he can lock in a national team roster spot ahead of the important fixtures set to come in 2021, which include FIFA World Cup Qualifying matches scheduled for this March. With the 2021 Canadian Premier League start date push back to late May, this means Didic wouldn’t even miss too much of what is set to be a long club preseason.

When FC Edmonton fully starts this preseason campaign, Koch is aiming to instill an attacking tiki-taka style of play, and that’s something that Didic is very excited for. The six-foot-four defender wants to build out from the back and see the Eddies bring a strong attack to their opposition next season.

Koch also intends to bring more structure to FC Edmonton set pieces, where the side has underperformed in both defensive and attacking moments over the past two campaigns. Didic says fans and players only need to take a look at The Island Games for some examples of how those set piece moments can make or break a game, indicative that improvement there is sorely needed at both ends of the pitch.

I agree, especially with our season, that even with the size of the guys we’ve had, we haven’t been as dominant. Looking at the roster now, we’ve got some pretty big boys coming in. Hopefully with how we play, we can manage to add a good ratio of set piece goals because that’ll help tremendously. As long as we’re solid defensively, we’ll give ourselves a good chance.

Born in Bosnia, Didic was raised in Edmonton and was a member of the Eddies Academy before departing for college in the states. His career saw him establish himself as a regular for Sporting Kansas City’s USL affiliate, the Swope Park Rangers, before a short stint in San Antonio preceded his return home in April 2019. Like many other CPL athletes, he never would have guessed that the domestic game would be at the level it is now when he first left the country:

It’s definitely something as I kid I never thought would happen, to be able to play professionally at a club that you grew up in. Especially growing in the NASL Days and the academy, seeing the guys playing and thinking maybe one day that could be me – you never know. Now I’m in my third year, it’s me, it’s happening. There are some changes on a staffing level, looking at a lot of changes overall, and hopefully it transpires into winning because that’s what we want to do. We want to win, that’s the nature of the game. I’m excited, we’re all excited, and we’re eager to get going.

While Didic admits that the inaugural season’s attendance at Clarke Stadium wasn’t as high as one would hope, he lends a big credit to the River Valley Vanguard for bringing some noise throughout the 2019 season and hopes they’ll be able to do again this year, too. Eric Newendorp has some big plans to bring a Major League feel to the club’s home ground with new amenities and ticket structures to draw in more curious eyes, though Didic has a simpler plan to get people through the gate:

At the end of the day, what brings people in there is winning games. It’s up to the players and the staff to produce the results, and the fans will come. Especially in a hockey city, you know?

With FC Edmonton entering the campaign with much to prove, one of the big talking points of the season will be if Koch’s rebuild sees immediate success. FC Edmonton has currently signed 16 players ahead of the 2021 Canadian Premier League season, with Didic being one of the big signings along the likes of Shamit Shome and Ramon Soria.

The financial details of Didic’s contract were not disclosed by FC Edmonton. It is believed he has signed on a one-year contract.