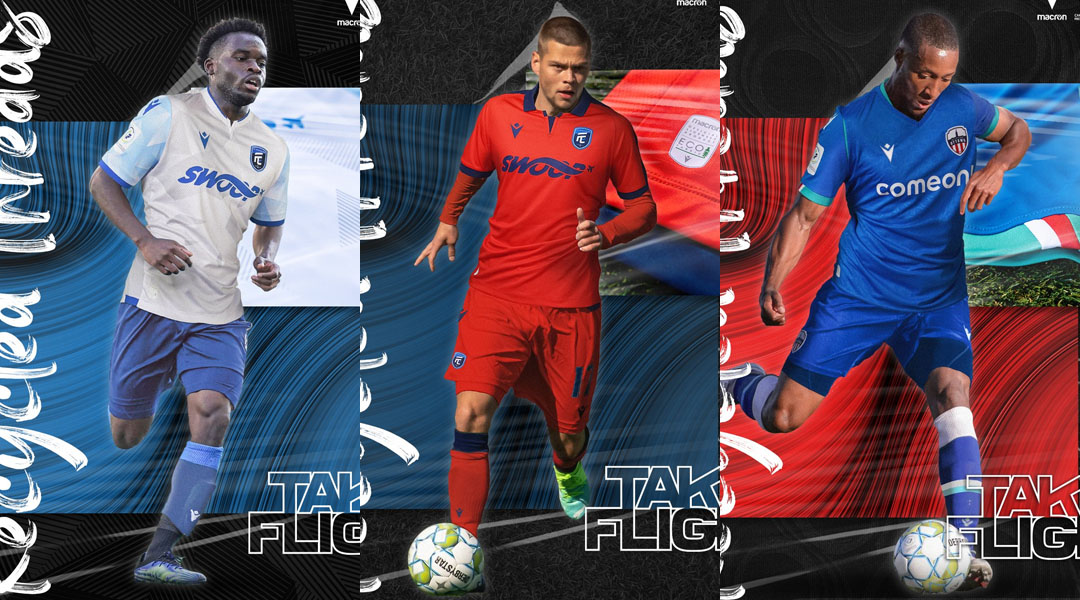 During watch parties for last night’s national team match, both FC Edmonton and Atletico Ottawa showed first looks at each respective club’s away kits, with the Eddies even including a throwback third choice kit, too.

It was only one week prior to this that the Canadian Premier League 2022 home kits were revealed, with both FC Edmonton and Atletico Ottawa releasing looks that didn’t harbour too many surprises barring that pink accent on the familar Eddies blue kit. With their alternate or third choice looks, however, comes something different.

The Eddies were inspired by the Ice Castles In Edmonton for its secondary look, which shows cracking geometric gradient ice shards on the front of a white chest and bright blue, ice-inspired sleeves. The familiar Eddies blue can be found on the kit’s accent, with the rally rabbit outlined on the back.

With the famed Ice Castles In Edmonton event having been absent for the last two years, the kit also brings hope for a return to normalcy in the days going forward. In a club which is experiencing plenty of hardship, it’s nice to see the optimism.

The largest departure ever seen from FC Edmonton’s usual colour motif sees the CPL club honour the city’s soccer history. Inspired by the NASL Edmonton Drillers side launched by Peter Pocklington back in 1979, these classic orange kits with a navy accent echo the exact look of a club which finished top of its conference back in 1980.

The orange away look stemmed from a Dutch influence in the community and from head coach Hans Kraay Senior, and here the Eddies have done a nice throwback that even features a retro font on the back. It won’t be everyone’s cup of tea, but it’s a nice homage to the first professional soccer club Edmonton ever saw.

While Atletico Ottawa’s primary kit continues to closely follow the style of parent club Atletico Madrid, the club’s alternate threads got a blue overhaul inspired the City of Ottawa flag colours: the blue and teal represented the rivers, waterways, and green spaces of the city, with the front of the kit rendering a pattern inspired by the flag’s ‘O’. The kit still honours its parent club through subtle red-and-white notches on the teal sleeve, too.

There are still six teams who have yet to show their alternate kits, but fans won’t have long to see them: Valour FC will follow suit on Sunday, with York United and Cavalry showing off their own alternate kits on March 30 and Forge following a day later. The Halifax Wanderers are waiting until they’re back home to show theirs on April 12, whilst Pacific doesn’t have a reveal date locked in just yet.

The 2022 Canadian Premier League season is now officially less than two weeks away, so it won’t be long before fans are seeing the above kits out on the pitch in competitive action. The 2022 CPL kits are made of Macron eco fabrics, which are 100% pet recycled polyester. For each produced shirt, 13 0.5 litre bottles are recycled.