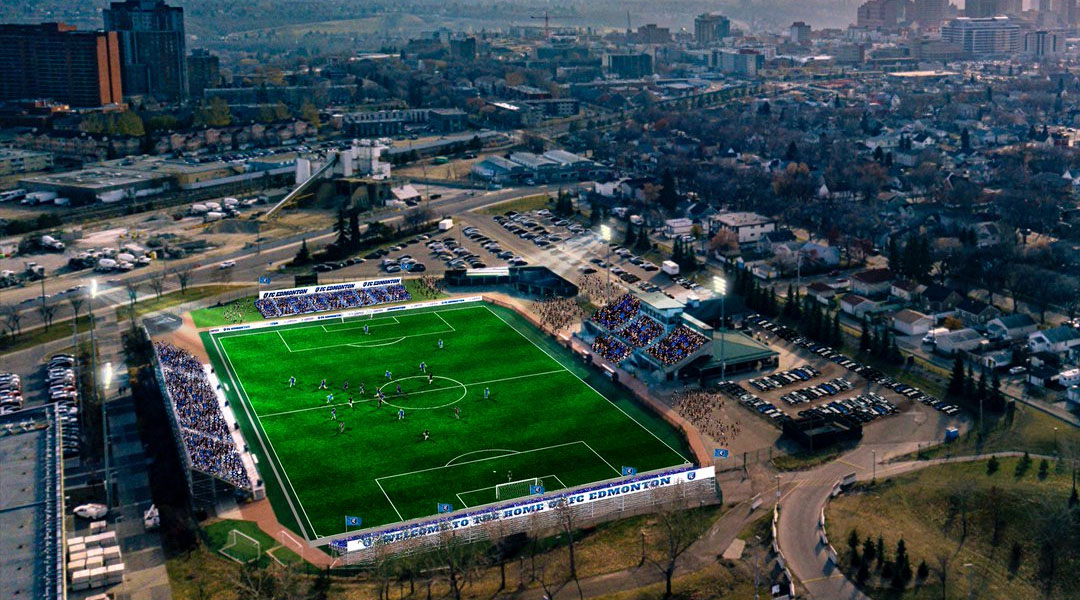 The inaugural Canadian Premier League campaign saw FC Edmonton’s Clarke Stadium play host to an average attendance of just under 3,000 fans, and one big ticket item on new Club President Eric Newendorp’s list is ensuring that this number trends upwards in the years to come.

The new Eddies man has had a busy start to his time in Alberta: he worked remotely through his quarantine period, but was finally able to move into his permanent accommodations and pick up his SIN late last week (he’s ‘slowly becoming Canadian’, he jests). He’s now able to work on a large list of priorities in-person that he says ‘all needed to be done yesterday’. The sentiment, of course, is that he’s covering a lot of fronts to help FC Edmonton make improvements all across the board.

Last week, Newendorp revealed that he had some improvements in mind for Clarke Stadium to help with this, acknowledging that the club may not be able to do everything he wants to do, but that he would push for improvements where it made sense to do so.

In a recent discussion with Northern Tribune, the top Eddies man revealed more about what he has in store for the Eddies’ home ground, and those plans feature a large focus on improving the matchday atmosphere and membership offerings in the stadium.

One of the biggest areas that Newendorp is keen to improve is Clarke Stadium’s west end, which sits on the opposite side shown on OneSoccer broadcasts. It’s a fixed concrete structure with metal bench seating that he feels has been comparatively neglected when it comes down to fan experience, and he wants to change all that with terrace seating and a mid-tier premium season membership offering.

The club is in discussions with the city to change the west end’s bench-style seating into a more desirable setup complete with individual seats and terrace tables where fans can put their drinks and food, with the possibility of a field pass so that west end season ticket holders can access the field level bar, too. Since the west end is close to the bathrooms and the main entrance, it seems like prime stadium real estate for fans wanting some additional amenities outside of the price point a full fieldside cabana experience carries.

You have our version of a suite which is a field level cabana, we’re upping how we do that. You’ve got your season ticket packages and those kind of things, and the field level coaches row which are these pub tables right next to the benches, and those are good – but there hasn’t been the other one where you want that kind of mid-tier premium seat that gets me a little extra amenities, but maybe it’s not field side.

The addition of terrace seating is something that Newendorp has seen have success in Tulsa, and it opens further commercial opportunities to the club with the possibility of having fan or company names embroidered in seat cushions, too. As he puts it, it’s a solid mid-tier alternative to the full fieldside experience that’s a lot more attractive than just bench seating.

While Newendorp has already revealed that the stadium will be in for a lighting overhaul to improve its night-time atmosphere, most of the planned improvements aren’t structural by nature. To that end, he wants to establish a visual identity at the club’s home ground that brings a ‘Major League’ vibe to spectators taking in a home game.

You know what it’s like when you go to your favourite sporting event, and as you pull up to the stadium grounds there’s an energy and a buzz. You may hear some music in the distance. You might smell grills and barbeques going. You might see the area within a certain perimeter of the stadium start to show team colours or team logos. Once you pull into the stadium, you might see some customer services representatives in the parking lot helping you see where to go. Clarke Stadium might seem more team-coloured with branded signage, for lack of a better word, which shows for sure that Clarke Stadium is home of FC Edmonton.

Some other ideas that Newendorp is considering include a family fun area where children can play, and a new section of the north end focused on corporate hospitality which includes a more all-inclusive, high-end buffet style experience.

He also wants to add international flags for every international signing on the Eddies roster come 2021, with the flag display changing as players arrive and depart. It’s an emotional attachment that the burgeoning league has already seen to a smaller extent: the Japanese flag hung by fans for Kodai Iida at Wanderers Grounds was easy to pick out of the crowd, and Newendorp wants to show that that the Eddies are proud of the club’s diversity and intends to put that on display.

All-told, those matchday experience improvements should combine to improve the atmosphere at Clarke Stadium, and that will lead to more season tickets, happier fans, and a bigger boost to the club during home games.

The city is a good partner, they’re open to other ideas. They’re cautiously positive in the right way, because they don’t want to promise something they can’t deliver, but they’ve been very receptive to these tweaks and ideas that we – not just me – the staff has been great at putting ideas in, and I think good ideas come from everywhere.

While Newendorp recognizes that some items that he has seen bring success during his time with the Tulsa Drillers (the AA affiliate of the LA Dodgers) aren’t apples-to-apples for a soccer club, he knows how to build a stadium atmosphere with a big league mentality, and he thinks that changes along the same line can help build up the FC Edmonton environment as a whole.

We’re going to do different things to make the experience of coming to Clarke and leaving Clarke something that is memorable so it’s more about atmosphere and what I call symbolics than it is about ‘hey, we’re building a brand new brick-and-motor club section and suites’. That’d be great too, but we’re not there, but we have to do something to make those improvements there so that people understand when they come to a match that it feels more major league.

While York9 FC became the first CPL side to offer fans an in-depth look at 2021 season membership packages, it looks like the Eddies won’t be far behind: Newendorp plans to unveil the club’s season membership options once the new head coach is announced, as he expects that the arrival will draw renewed interest from fans.

We’ve redone how our membership plans work in regards to some of the rights and benefits that go within them. The flexibility options that we’re going to give, more on that later as we roll out.

In regards to that new head coach, Newendorp says that there has been positive progression in the last week. While the announcement isn’t quite due as soon as he would like, he says the new club gaffer is still a ‘near-future’ arrival for the club.

When that day comes, he says he’s hoping that the front office is challenged to fill up a newly-energized Clarke Stadium as much as it can. While he acknowledges the club may have a capacity allowance percentage imposed upon it by public health authorities – assuming fans can attend games at all – the club will be doing all it can to lock in a good-sized audience for 2021 and beyond.

Newendorp has also re-signed a handful of players, with young prospect Chance Carter re-signing with the club this past week. While the CanPL Editorial team confirmed that Easton Ongaro and Jeannot Esua were contracted for 2021, it remains to be seen who else will be back under the guidance of a Newendorp and the club’s upcoming head coach. We’ll have more on those expectations tomorrow.