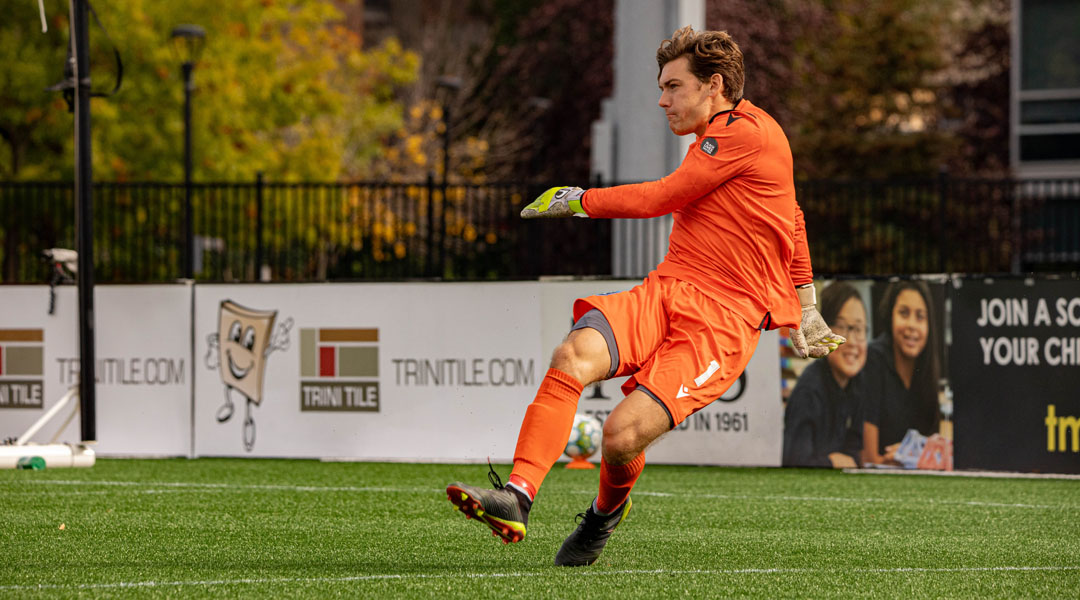 After three years as the number one goalkeeper for FC Edmonton, goalkeeper Connor James is taking off his gloves for good.

This evening saw the 25-year-old announce that the 2021 Canadian Premier League season will have been his last, with his final appearance for the club having come in a 3-3 draw that eliminated Valour FC from playoff contention. He rode the bench behind Darlington Murasiranwa for today’s season closing win against Forge FC.

I’m so thankful for all of the memories and experiences that the game has given me. I’ve been so fortunate to have been able to play professionally for my hometown club and in front of my friends and family for the last three years. Those good sentiments make the decision to retire evermore difficult, but I’m excited to embrace the next chapter of my life. I’ve been able to live out my childhood dream, and for that I’m forever grateful.

Connor made 52 appearances during his time with the Eddies, collecting twelve clean sheets from his 4,609 minutes of action on the pitch. His rookie season saw him earn a golden glove nomination from the league, too.

Prior to turning professional with his hometown club, James obtained his bachelor’s degree from the University of Alberta, for whom he made 67 appearances across five seasons. Like Easton Ongaro, he had also played for the Edmonton Green & Gold in the AMSL, too.

See also: James Says CPL ‘Has A Lot Of Parity’

His graduating year saw James recruited into an accounting position at KPMG Canada, though he opted to live ‘two dreams’ simultaneously after being drafted by FC Edmonton in the first round of the inaugural CPL-U SPORTS Draft. He becomes the third first round pick from that draft to step away from the professional game, with Daniel Gogarty and Dylan Carreiro having also left the pro game behind.

James becomes the second CPL goalkeeper to retire this year, with Pacific FC’s Nolan Wirth having opted to step away from the pro game earlier this season. Former Eddies goalkeeper Dylon Powley recently discussed the possibility of retiring depending on his offseason, though Connor’s departure could pave way for an FC Edmonton return for him.

The Eddies had also seen midfielder Chance Carter depart from professional soccer shortly before the 2021 season kicked off, too.

While James didn’t say what was coming next, it’ll almost certainly be a full-time career in accounting. We wish him all the best in his next chapter.