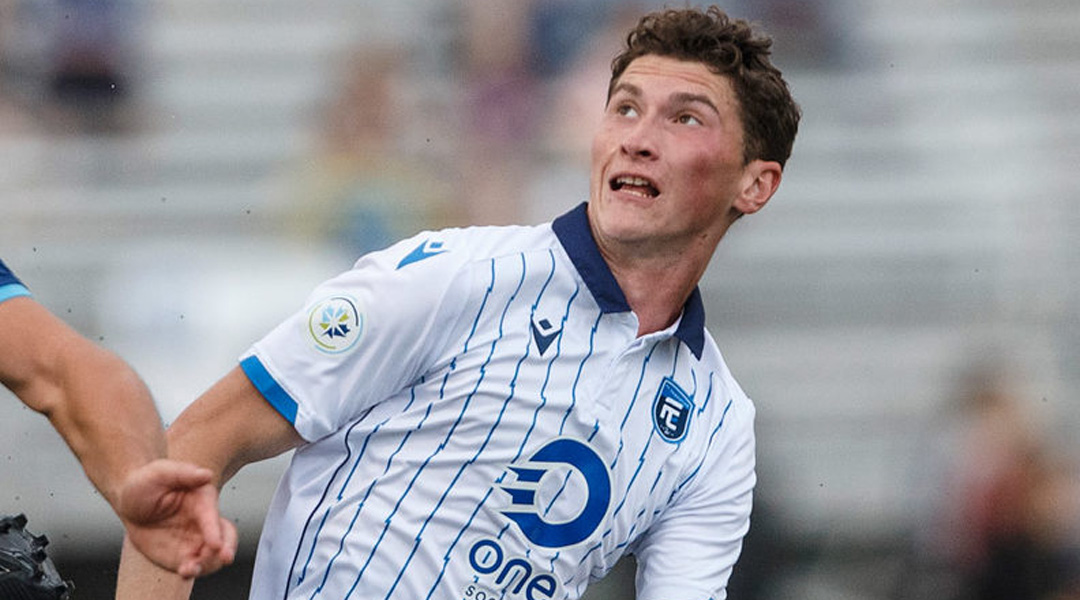 Prolific forward Easton Ongaro has signed a multi-year deal with FC Edmonton. Given that his first-ever professional season ended with him scoring double-digits, the announcement is sure to be a popular one with Eddies faithful.

The six-foot-six forward had a breakout season for the Eddies in the fall, where he scored some ten goals in Canadian Premier League action. He’s excited to remain in his hometown, where he’s been able to play in front of friends and family:

It means everything to stay with Edmonton and continue to play in front of my family and friends. I grew up playing here from the youth level to the post-secondary level, and I got my first professional contract and minutes here in Edmonton.

Ongaro, 21, was originally selected by Cavalry FC in the inaugural CPL-U SPORTS Draft. Tommy Wheeldon Jr. couldn’t envision him getting significant minutes, so Ongaro ultimately ended up signing with FC Edmonton, where a hand injury limited him to just 95 minutes of action in the spring.

In the fall, Ongaro made his mark: he scored ten goals in just 1,070 minutes of action, also contributing two assists along the way. His exclusion from the Best U-21 Canadian Player nomination, some say, could be considered a snub.

The 21-year-old has now set his sights firmly on 2020, where he believes he can come away with a Golden Boot if he plays his cards right. Given that he came fairly close it winning it this year while missing the first-ever spring season almost entirely, that’s not an unreasonable goal.


Ongaro becomes the first player on the Eddies roster to confirm he’ll be staying for 2020 (and potentially beyond, with a presumable option for 2021 based on unknown conditions). So far, Eddies head coach Jeff Paulus has made eight cuts to the roster, suggesting that the squad which takes to the pitch at Clarke Stadium next year will feature some drastic changes.

Whatever happens, fans can be assured that a certain six-foot-six standout will be doing his best to keep the Eddies from going through a repeat spring season goal drought come 2020.

Financial details regarding the contract were not disclosed by FC Edmonton, nor was the actual structure or length of his multi-year deal.

Update: In a later interview, Jeff Paulus did state it was a two-year deal.