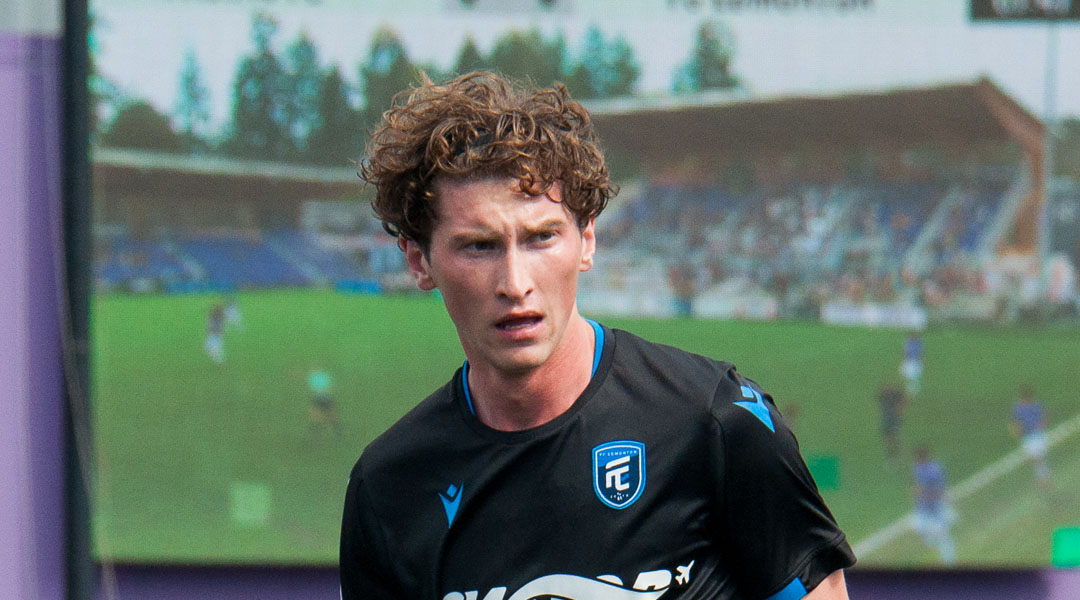 The Canadian Premier League’s all-time top goalscorer has his eyes set on Europe.

After three seasons in the CPL, FC Edmonton’s Easton Ongaro is ready to try something new, though where he may ultimately end up remains to be seen.

“I got a taste of Europe last year,” says the forward, “and I want to try that again. Right now, things are up in the air and I’m not sure what my future holds. It could be anything, it could be the last thing I or anyone else expects. We’ll see what happens.”

The Eddies striker has been an absolute phenom for the side over the last three seasons. While FC Edmonton had a difficult season, Ongaro scored a personal best – 12 goals – to put his all-time tally at 25, the most out of any Canadian Premier League athlete in history.

Last season saw the striker spend some of his offseason out on loan in Denmark with Vendsyssel FF, where he scored his first goals abroad before re-signing for a third year with FC Edmonton. The experience overseas left a lasting impression on the 23-year-old.

Growing up, you think Europe is so far away, and so different, it’s almost like an unattainable dream. Then I get over there, experience it, and realize it’s not so much different. It’s a jump you can make, and the level isn’t that much of a difference. You’re just as much as an athlete as they are, and if you believe in yourself and you can get over there, you can progress at that level.

Easton has spoken before about how the experience helped him develop as a professional, but beyond helping him on the pitch it gave him a larger perspective of the footballing world, too.

“I think it pulled things together for me, and made me realize that I’m a lot closer to Europe than I thought. It motivates me and gives me the confidence to keep going.”

While Easton is hopeful that his European aspirations will come to fruition, that doesn’t completely rule out a potential return to Clarke Stadium. While Ongaro states that FC Edmonton hasn’t sent him any formal offer, his exit interview indicated that they’d be happy to have him back.

“I’m from Edmonton, and I live at home, so it makes a lot of sense for me here,” he says, “but like I said, it’s very unknown right now.”

It also shouldn’t come as a shock to hear that multiple CPL sides have approached the league’s top goalscorer, which is more food for thought for the prolific striker to stew on.

Growing up, European dreams seemed a distant hope for Ongaro, with professional football also seeming a far reach. A late bloomer, Easton didn’t develop through an academy system or a semi-professional environment. Instead, he joined the Edmonton Green & Gold in the AMSL shortly before exploding onto the university scene. With the birth of the CPL, a bridge between U SPORTS and professional football was born, and he grasped the unexpected opportunity.

While Cavalry picked him up in the draft, it was FC Edmonton who ultimately signed him at the age of twenty.

“Making that jump was special for me,” he says, “and I had the confidence that in that every level I’ve played at, I’ve been able to score goals. That didn’t change for me in the CPL: after a slow start, once I found that first one things started rolling for me and gave me the confidence that at this level I can do that, and continue to score.

By his second and third seasons, scoring was simply something he had to do, and he did it well: “It’s my job, and I took on that role in the club and the league to be a goalscorer. If I’m not doing that, I’m not doing what I’m supposed to do.”

Now having wrapped up his second double-digit scoring season – something only one other athlete has ever done – he’s now ready to see if he can keep scoring at the next level.

This is exactly what this league is about. Even if this league is losing some of their top players, it’s a good look. You want to see players progress and move on to the next level.

With one third of FC Edmonton’s goals this season coming through the six-foot-six striker, it’s no secret that he’s been a bright spark in what has been a cloudy CPL era for the Eddies. With a disengaged fanbase, the club saw attendances start to dip under a thousand this season as the side followed up a winless campaign in PEI with a second-last finish in 2021.

“It was a frustrating year for the club,” he admits, “and with the low attendance and all that, it’s disappointing. I think FC Edmonton really needs to find a way to turn things around and make things better, because the way the past couple of years have gone and the pandemic, it’s very difficult, and it’s not ideal.”

The honest truth hurts, but Ongaro harbours a lot of love for the Eddies. He arrived as an untested, late-blooming U SPORTS product who Cavalry FC turned down after selecting him in the draft, and he remains thankful for the opportunity. “We had good team morale and a group group of core guys that have stuck together,” he says of this year, “it’s unfortunate to see that there might be a turnover in the squad again.”

Related: FC Edmonton Facing Blunt Truth: ‘We Have To Improve’

With the likes of Forge, Cavalry, and Pacific all having kept big chunks of the squad together throughout three seasons, Ongaro is a firm believer that roster consistency players a big role in sustainable success. “Still,” he concedes, “when you finish last and second-last place two years in a row, things have to change. I can’t really say much about it.”

He acknowledges that the Eddies have had it tough the last few years, but notes that the difficult times have helped him come out a better, stronger person. “You have to do your best with it,” he says, “you lean to adjust, take what you have, and do your best.”

With FC Edmonton having already concluded its exit interviews, it remains to be seen how many of the club’s current roster will return. Newendorp expects to see some players back, but whether Easton will count himself among them remains to be seen.

“I’ve been in this league for three years now, and I feel like I’ve proven myself at the CPL level,” he states, “I’m ready for a new challenge and a new experience.”