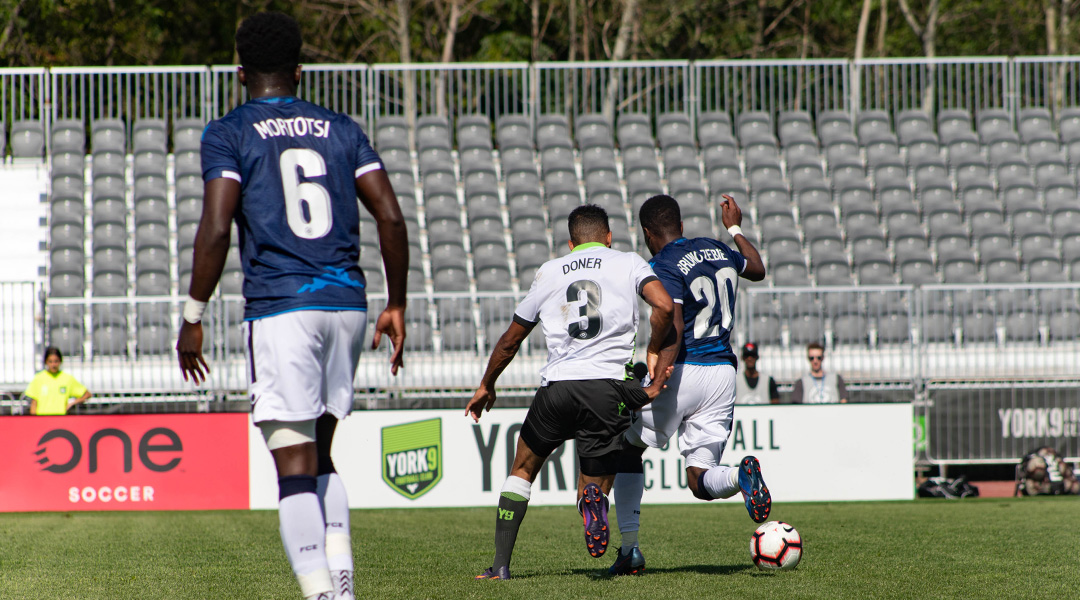 Canadian Premier League side FC Edmonton will be undergoing the 2020 season without one of the club locals: Eddies midfielder Edem Mortotsi will be missing out on The Island Games in full.

The 27-year-old did not travel with the squad to Charlottetown, Prince Edward Island after picking up an undisclosed injury. The Eddies athlete re-signed with the club last November, with his last competitive match having taken place in October 2019 during a 3-1 win over Pacific FC, where Mortotsi provided an assist for a Prince Amanda goal.

Mortotsi appeared regularly in the 2019 fall season for Jeff Paulus, making sixteen appearances and contributing two assists. The spring campaign saw him accumulate just seven minutes of action as Paulus slowly gave him more minutes in the fall, before he made six ninety-minute appearances in a row to close out the season.


The Ghana-born midfielder – who grew up in Edmonton – has had a rough go of injuries in the past. Five years ago, he thought his career was over after tearing his Achilles tendon shortly after trialing overseas in Sweden. It was a long rehabilitation process, with Mortotsi even attending the gym in crutches in an effort to build strength – mentally and physically – during the process. He puts a large credit on his teammate Allan Zebie for helping him through this long-term recovery.

CanPL Editorial writer Marty Thompson believes that Chance Carter will ultimately replace Edem’s role in the squad, with the left-footed youngster offering a depth midfield option behind more experienced players. Jeff Paulus is a fan of the five substitute rule, which should see youngsters like Carter get a chance to play at the professional level, especially with the Eddies gaffer stating that the health and freshness of an athlete will overshadow technical ability in the shortened season.

Telling AFTN that he’s still two players deep in every position, the Eddies gaffer believes the players with him in PEI can lead the side to a playoff push:

The key is finishing in the final four. It doesn’t matter to be first or second, it’s irrelevant, because the second round is a round robin as well. There’s no benefit to finishing one or two, you’re going to play each team once, and I think that the team that can successfully maneuver the seven games and be the freshest team for the second round will be the successful team.

This shortened regular season will see FC Edmonton average just 3.5 days between matches, which isn’t a lot of time for athletes to recover. That being said, the other seven CPL sides are largely in the same boat, with each club averaging between 3.3 to 3.8 days of rest between matches in the regular season schedule.

FC Edmonton will kick off its campaign at The Island Games on Sunday, August 16 against Forge FC at 3:00PM EST, with the Al Classico matchup following suit at Thursday, August 20 at 2:00PM EST. Paulus has built around his returning core selection of players with eight new additions (seven of which are with the club), with Hanson Boakai and Keven Aleman perhaps being the most high-profile additions.


The Eddies aren’t the only side who have already suffered an injury issue ahead of the league’s second season, with the Halifax Wanderers potentially seeing first choice goalkeeper Christian Oxner miss the early portion of the campaign. The injury has forced the club to seek a late third choice goalkeeper solution, with no such player currently rostered to the club.

Atletico Ottawa’s Kunle Dada-Luke didn’t travel with the squad to PEI, either.

The details regarding Edem’s injury have not been mentioned by the club, but we wish Edem Mortotsi all the best in his recovery.