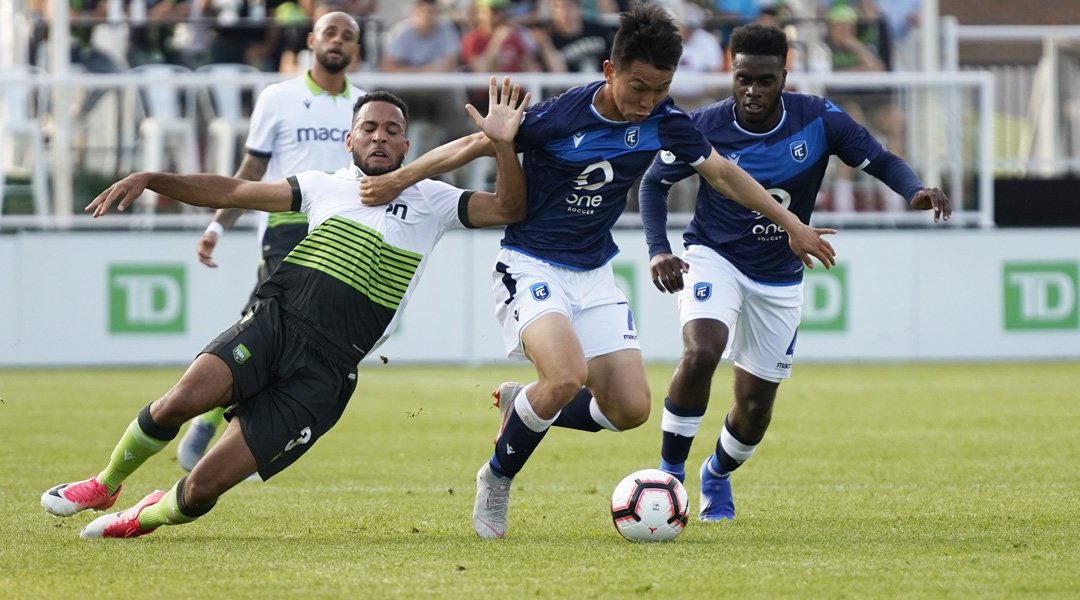 Out of any Canadian Premier League club, FC Edmonton is the one with the most history: having started out as an NASL side nine years ago, The Eddies started their first-ever CPL campaign with an experienced club structure already in place. Unfortunately for the Alberta-based club, this hasn’t translated into on-field success: FC Edmonton currently occupies the bottom of the table after seven games played.

It’s no secret that a big factor in the club’s struggles has been a lack of tenacity in the final third. FC Edmonton has only scored two goals in Canadian Premier League action so far, which puts the club an astounding 11 goals behind league-leaders Cavalry FC. It’s 14% of what second-placed Forge FC has converted so far, with the Hamilton-based club accumulating a league high goal tally of 14.

Head coach Jeff Paulus knows that the final third is where improvements need to made, especially with the league table due to reset for the fall season in less than a month.

Obviously, it’s apparent that we have to work on finishing, and take our chances as we get them. The big thing with that is working on shot selection, where we’re shooting the ball from, and giving ourselves better chances to score based on where we’re striking.

Team Captain Tomi Ameobi, who scored some 23 goals for FC Edmonton during its NASL days, touched on his partnership up front with Oumar Diouck. During last night’s midweek match against York9 FC, the pair created a great chance in the 64th minute after a deft dummy from Ameobi gave Diouck space to shoot, but the strike was a few agonizing inches off-target.

Today probably wasn’t our best together as a two that we’ve played so far, but I think there’s something there that’s budding. We’re hitting the back of the net in training. We just need to come out and do it on game day.

With Paulus having already filled the club’s 23-man roster, he’ll need to work with his existing attacking options to find a system that starts delivering goals. If he wishes to bring in anyone new, someone will have to make way to clear up the required roster space.

It looks like Easton Ongaro will be getting more chances to help in this regard, with the 21-year-old now having made two substitute appearances in the last week. He looked dangerous when he came on during last week’s Al Classico, but on both occasions he ultimately couldn’t make the difference.

If there are any positives for FC Edmonton, it’s that the club is making chances, staying concentrated, and has a stalwart defense that has – Al Classico aside – stood tall and kept league losses to minimal scorelines.

As a team, we defend really well. The back four have kept us in so many games. It’s just about the other end of the field and relieving some of that pressure. That’s something we have to stand up and be accountable for.

FC Edmonton will travel to Vancouver Isle to play Pacific FC this weekend, and the bottom-table clash will be an interesting matchup: both sides are struggling to score goals, while Michael Silberbauer’s young defense has conceded the most out of any CPL side. If there’s any match that could be used as a launching pad for a return to goalscoring form for FC Edmonton, it’s the one against Pacific FC.

Despite being unable to lead his side to its second-ever CPL victory on Wednesday, Paulus was still in fairly good spirits. As he left the media room, he cheekily remarked that ‘the refs were good today, by the way’. After his emotional comments from earlier in the month, it’ll be interesting to see if his positive and upfront mentality translates into positive performances as the spring season enters its closing stages.

Eddies fans will be hoping it does.

The 5 Youngest CPL Goalscorers So Far