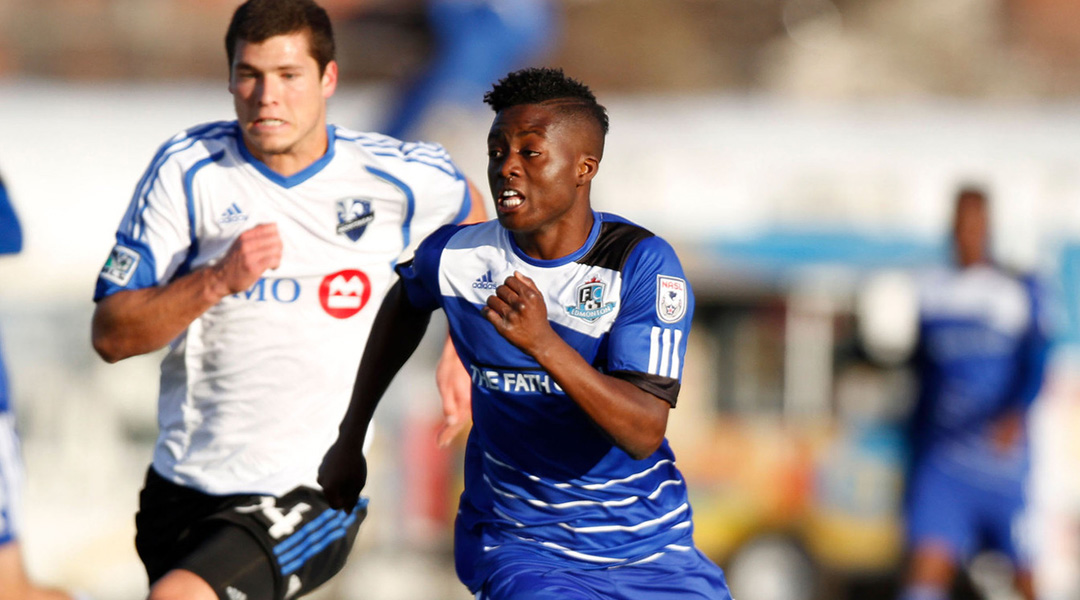 A familiar sight from FC Edmonton’s NASL days will be returning to Clarke Stadium next year, and his name is Hanson Boakai.

If that names sound familiar to some, that’s because he lit up the North American sports scene several years ago as an Eddies youngster, putting in stellar performances during the 2013 FIFA U-17 World Cup that earned him trials with the likes of Fortuna Dusseldorf and Deportivo La Coruna.


The media put a lot of lofty expectations on Boakai: as Goal.com hailed him the ‘Next Canadian Messi, or Maradona’, the rumour mill churned out a supposed move to Toronto FC. Instead, the now-23-year-old midfielder went overseas to trial for Croatian side Hajduk Split.

When the dust settled, he found himself a journeyman across the lower divisions of Croatia, Sweden, and Romania, where administrative issues limited his opportunities. A move to Finland in 2018 saw him get the regular playtime he sought, and he became a key figure for second division side Ekenas IF. Those performances would lead Boakai to make a jump to top flight Finnish side Inter Turku this year.


Having found his chances limited in the top division, a jump back home to FC Edmonton now makes a lot of sense for the Guinean player. Having grown up in Edmonton (and, thus, counting as a domestic player), he’s sure to get a warm welcome from the Eddies faithful.

He’s a kid with that special ability on the ball. When you look at the league and you see the impact of a Borges or a Bustos-type player, now we’ve got that kind of player at this club. Hanson Boakai is that player. He’s incredibly gifted on the ball, and his centre of gravity is low, making him hard to knock off the ball.

When he made his debut for the NASL-era FC Edmonton, Hanson made American sports history by becoming the youngest player to make an appearance in the league, being just 16 years and 231 days old during his professional debut.


The FC Edmonton Academy graduate made some 27 appearances for the now-Canadian Premier League club between 2013 and 2015, with one of his first goals coming against the Ottawa Fury during the Eddies’ 2014 Canadian Championship run that would eventually see them bow out against the Montreal Impact in dramatic fashion (which, it turns out, still irks Jeff Paulus).

The five-foot-four midfielder is known for his creativity on the pitch, with his professional career seeing him deployed all over the midfield and, occasionally, as a centre-forward. His versatility will give Paulus a lot of flexibility, and his attacking mindset ought to help reduce any potential goal droughts come 2020.


Boakai has also appeared for the Canadian U-20 side under Rob Gale, with his last appearances for Les Rouges coming with the Canada U-23 side in 2015, when he was still 18 at the time. Then-Canada head coach Benito Floro also called him up to the senior team for a friendly against Colombia, though he didn’t play in the match. More recently, he accepted a call-up from Liberia for a friendly against Botswana this September.

Boakai becomes the fourteenth confirmed signing for an Eddies side which is retaining a big core group of players, though the futures of Amer Didic and Ajay Khabra are still uncertain.

Of the announced players to feature for the 2020 Eddies side, Boakai is the first brand-new signing, with Eddies Academy prospects David Chung and Jacob Bosch also set to fight for a spot in the squad after being selected by Paulus in the CPL-U SPORTS Draft.

After several years spent abroad, it’ll be interesting to see how the Eddies man performs during his return after he bore the significant wait of excessive expectations overseas. In all, the signing seems like a low-risk, high-reward maneuver from Paulus, who will be hoping that a stint at home reinvigorates the Eddies Academy product.

The length of Boakai’s contract was not disclosed, nor were his contract’s financial details.