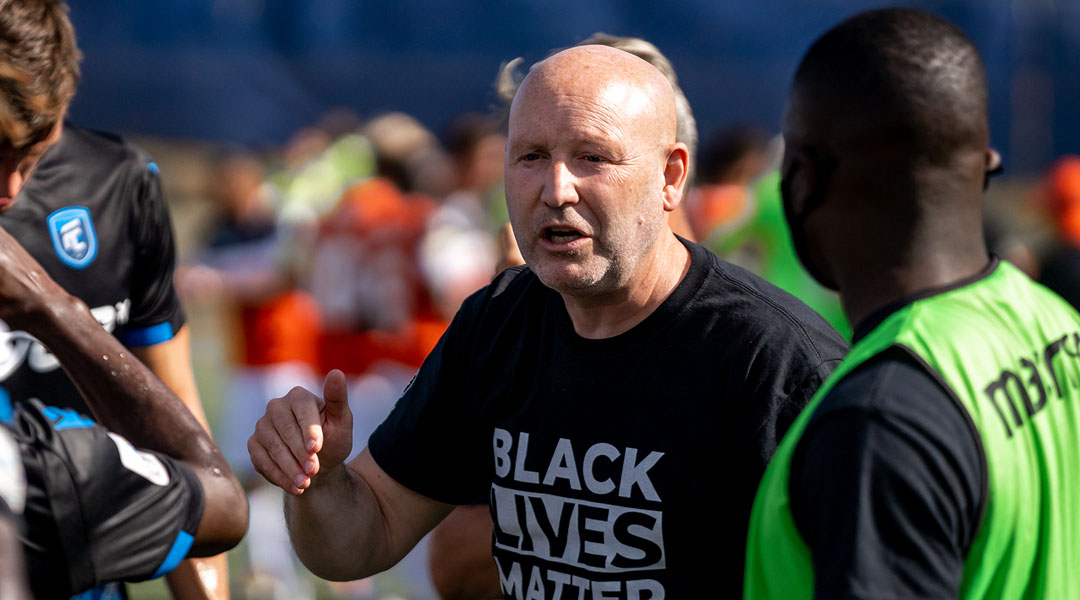 After finishing in last place at The Island Games, Canadian Premier League side FC Edmonton became just the second-ever team in the league to undergo a change in head coaches. Jeff Paulus had openly stated that it was time for such a conversation, with club owner Tom Fath offering him a new role as Manager of Player Development after he stepped down as the club’s gaffer.

The 51-year-old coach then announced he was simultaneously signing on as the technical director at FC Edmonton Scottish United, while also completing his MBA over the next year and a half. With plenty on his plate even after stepping down as head coach, it begs the question: how will he split duties between both clubs and his educational pursuit?

As it turns out, Paulus expects his role with the Eddies to be a transitional one: he says there will come a time when he’s not longer at FC Edmonton, and the longtime Eddies staff member has made peace with that fact ahead of time.

There will be a time when Jeff Paulus is not at FC Edmonton, and that will be okay. I think that it will be the growth of that club, and for my own personal growth. I’m here at the club I want to be at, and this is where I can grow myself as a manager and someone who has a passion for developing players towards professional football, Canada Soccer, university, or just for passion of the game. At the end of the day, it’s all going to work out for everybody.

When the new manager arrives, Paulus says a big part of his responsibility at the club will be to oversee the transitional period for the new gaffer, offering his support as the new boss gets a lay of the club’s inner workings. He’s also prepared to give a detailed overview of the academy system, stating that he’ll ensure some good talent in both the U-21 reserve team and the first team aren’t ‘lost in the shuffle’ in the event of a technical staff turnover.

By that point, he says, the new manager for FC Edmonton will likely have their own ideas and will want to move forward with them. Depending on how that point in time unfolds, it could be a curtain call for Jeff’s nine years with the club – though he recognizes that things could happen sooner, too.

It will be when the moment feels right for everybody, or the new manager could force my hand right away and it could be sooner than later! I am open to that, again, I’ve been at peace with my decision since Charlottetown. I knew which way I was going to go, so I’ve been at peace for quite a while where I’m at. I feel priviledged and honoured to have represented this club for as long as I have.

Paulus first joined FC Edmonton in December 2011 as assistant coach to Collin Miller and technical director of the FC Edmonton Academy. Following the closure of the NASL, FC Edmonton called upon Paulus to rise up to the head coach mantle for the club’s Canadian Premier League era, which the Scarborough-born coach now departs with a win rate of 27% after 37 games in charge.

Of course, it’s not just Paulus who could be leaving ahead of the 2021 CPL season: the unfortunate reality of the professional game is that some head coaches prefer to install their own assistants, and that means that Sean Fleming and other members of the Eddies technical staff could be departing, too.

Anytime that there’s a coaching change, there’s the unfortunate trickle effect where the entire staff is impacted. I’ve been open and honest about that with all the staff members in the club that I work with, and that’s the unfortunate reality of professional sports. I hope they all have a place at FC Edmonton going forward, but that’s not my decision now. That’ll be for the new head coach.

While the former Eddies gaffer is fully committed to putting a hundred percent of his effort in FC Edmonton Scottish, he did admit he would ‘never say never’ about a potential return to the Canadian Premier League – but for the moment, he has no such thoughts of head coaching in the professional game. For now, Jeff is focusing on improving himself and, of course, the next generation of football talent in Edmonton.

I also know that I have time now to become a better manager, and put time into that. I’ve not had time in the last few years, with being so busy here, so this is a chance to become better at what I do. I owe that to the players I work with here, and I owe it to potential players in the future. I’m very happy at the moment here.

Paulus also learned a lot through his stint as interim general manager for the side, and recently sat down with us to discuss the creative ways FC Edmonton is securing offseason moves for its roster during the pandemic. Last week, this resulted in the loan of Easton Ongaro to Danish side Vendsyssel FF.

When reflecting over the last nine years, Paulus sums up his time with the Eddies by saying it feels ‘really good’: while he wishes he could have won the fans a few more wins across the last two seasons, he says that for someone who never played at the professional level himself, he can certainly look back on his tenure with the side with a big sense of pride.

I’ve worked at every level of the game: grassroots, club soccer, provincial coaching, the old national training centre for Canada Soccer, I’ve coached at the college level, and then this pro academy, assistant coaching, and then of course this job here. I’m very proud of that, and I’m very proud that it will hopefully create a model of what can be done for a Canadian coach just like me. There’s only so many Canadians who have played professional. For those like me who put the time in and really dedicate themselves, hopefully I can – I don’t want to say a role model, because I’ve got so many flaws – but maybe just validation that this is available now for Canadian coaches that put the time in, and it’s not just for those who have played the game at the professional level.

When Paulus stepped down as head coach in late September, many members of the Canadian soccer world were quick to send messages of support to the 51-year-old coach – though at the present, he’s taken his Twitter profile down after a political tweet took off and brought in an influx of discourse, some more respectful than others.

In our experience with the most recent Eddies gaffer, he was always one to speak what’s on his mind and never shied from displaying his emotions. It’s clear that his passion has always been in youth development and local products, and it comes as no surprise that this is where his next chapter lies. Reflecting on his achievements with the side, Paulus touched on this local element, too:

I’m proud of the players we’ve developed out of our academy, I’m proud of the female program that we’ve helped influenced through the REX program that Tom and Dave Fath funded and brought that on board. I think the results weren’t there at the end, but when I took this job I said that I was going to try to do this with Edmonton players and really lean on our academy players, and players that were developed in this city, so I’m very happy that I stayed true to who I was. I wanted to promote Edmonton players, and I’ve done that. I didn’t let the circumstance or my position change about trying to push young players forward. I think I’ll always be very happy with that, that I didn’t let the job affect who I am or what my beliefs are for young Canadians to get the opportunity to play pro.

Now settling in to FC Edmonton Scottish United, Paulus will be able to have a greater impact on boys and girls from the U-13 to U-17 levels and beyond. He’d been discussing the project with Executive Director Kevin Poissant for some fifteen years now, and says that there’s a lot more to come from the club: while it already utilizes the largest indoor soccer pitch in Canada, Paulus hints there there is ‘more to come’ in terms of club facilities. Combined with a technical staff of former Eddies man Paul Hamilton, former Canada U-20 athlete Karli Herdlund, and veteran coach David McCarthy, the ambitious club certainly has an impressive technical roster to build around.

With Jeff Paulus having largely built the FC Edmonton Academy system into what it is today, it makes sense that he’ll have a chance to show the system’s inner workings to the incoming head coach. While it remains to be seen if the former gaffer will stay on with the side in a limited capacity beyond that, it’s clear that he’s made peace with his decision to step down – and whatever happens next, his time with the club will evidently continue to have a long-term impact.