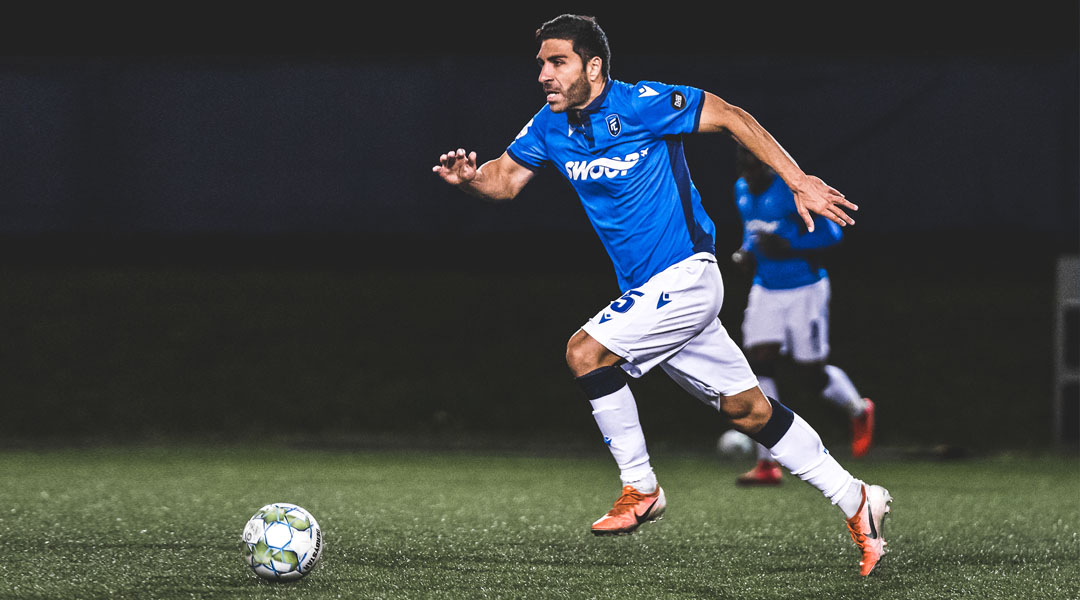 How FC Edmonton Plans To Secure Offseason Moves For Its Players

After finishing bottom of the table at The Island Games, FC Edmonton returned home and resumed training with immediate effect, with former head coach Jeff Paulus looking to maximize the amount of time on the pitch his players got ahead of a very long offseason.

To help with this, the club has independently partnered with an agency to secure overseas loan and training moves for its players, keeping them as fit and and sharp as possible ahead of the 2021 Canadian Premier League season.

While Paulus had made mention a few weeks ago that his club was were looking to secure some moves in Germany, the former Eddies head coach has now provided Northern Tribune with a bit more detail regarding the club’s plans to loan its players out during the long Canadian offseason.

To be clear, it’s not an easy task: even before one considers the impact the COVID-19 pandemic has on international travel for these players, the league’s salary cap is a big limiting factor. Beyond a squad salary cap, each CPL team has a salary cap for its technical staff too, and that means that teams in the Canadian Premier League don’t really have a full-time staff member to source these kinds of moves.

For Paulus – who until recently was both the head coach and interim general manager of FC Edmonton – that meant the onus fell on him to put in extra time reaching out to foreign clubs in an effort to arrange offseason moves for his players.

As mentioned above, the club found a solution to this by way of partnering with an independent agency to be FC Edmonton’s voice overseas. While Paulus had made specific mention of Germany in Charlottetown, this agency has connections in a few other European countries as well, and is currently working towards some training and loan moves for members of the Eddies roster.

They’ll represent our interests and our young players, and hopefully create these opportunities for training. If we can get loans out of it, fantastic. This is how we go forward, because it’s a very difficult thing to maintain a full-time salary position for that. This gives us an opportunity to get our foot in the door with some European clubs. We’re working on things right now, and we hope they’ll pan out.

Last year saw similar moves take place behind close doors, with Cavalry FC sending Dominick Zator to train with Ross County and Nico Pasquotti training with Real Mallorca. More than likely, there were some other quiet training moves around the league that remain undisclosed, too.

For instance, while Pacific FC hasn’t commented on the status of 17-year-old teenage goalkeeper Emil Gazdov, he’s currently training with the FC Nurnberg Academy over in Germany. As the offseason wears on, fans can expect to see more players depart for similar training opportunities.

Of course, a loan move is the most ideal thing for a CPL player during the offseason: it gives them first team professional action, which is something a training-only environment can’t replicate. Cavalry FC midfielder Jose Escalante secured such a move in his native Honduras, stating that he will return to Canada in time for preseason. Though this move was announced nearly a month ago, Cavalry FC has remained quiet regarding the player’s movement.

Last week, York9 FC became the first team to complete one of these moves in the offseason with assistance from the league, with Jamaican forward Nicholas Hamilton set to dress in Dundee FC colours until June. Club President Angus McNab has also actively engaged in services like TransferRoom for both inbound and outbound player moves.

The length of Hamilton’s loan deal means that he’ll miss the start of the Canadian Premier League season if it begins in April. As indicated by Jeff Paulus, that kind of loan timeline is an unfortunate reality of how the COVID-19 pandemic may force the hand of some clubs who need to secure offseason loan deals for their players.

There’s the reality that some of these loan deals right now, because of COVID, the clubs want them there for a long period of time. You almost have to accept a loan until June, and that’s a very difficult thing because if we have a normal season then a player is lost to us for part of the spring season and the salary cap is gone, and they’re also a spot on our roster. That does pose some challenges, but we’re trying to overcome it and certainly going forward we hope that we have a nice relationship here to get our players opportunities.

While Paulus has retained some of his administrative duties as he transitions out of the head coach role for FC Edmonton, his new role has him more zeroed in on the academy system for the Eddies. He says there’s no specific timeline for a full eventual departure, which – of course – could come down to a decision from the club’s new head coach once the Eddies zero in on a replacement.

Former Eddies boss Colin Miller says the head coach post at the club is a position of high desirability, with Jeff’s replacement set to arrive to a system which now has an agency already set up to procure offseason moves for the Eddies squad.

Fans can likely expect to hear about many offseason loan moves in the near future, though Cavalry FC head coach Tommy Wheeldon Jr. admitted that there were more players than there were opportunities at the present: if CPL sides are going to get loan moves to happen, we may see a few CPL players who only return to the league partway through the 2021 Canadian Premier League season.

There’s also some players who may depart as free agents with intentions to return next year, like Valour FC midfielder Jose Galan, too.

There are pathways aplenty for player development in the offseason, but finding a balance that works for both a budget-constrained domestic league and foreign clubs during a pandemic is certainly a task easier said than done.