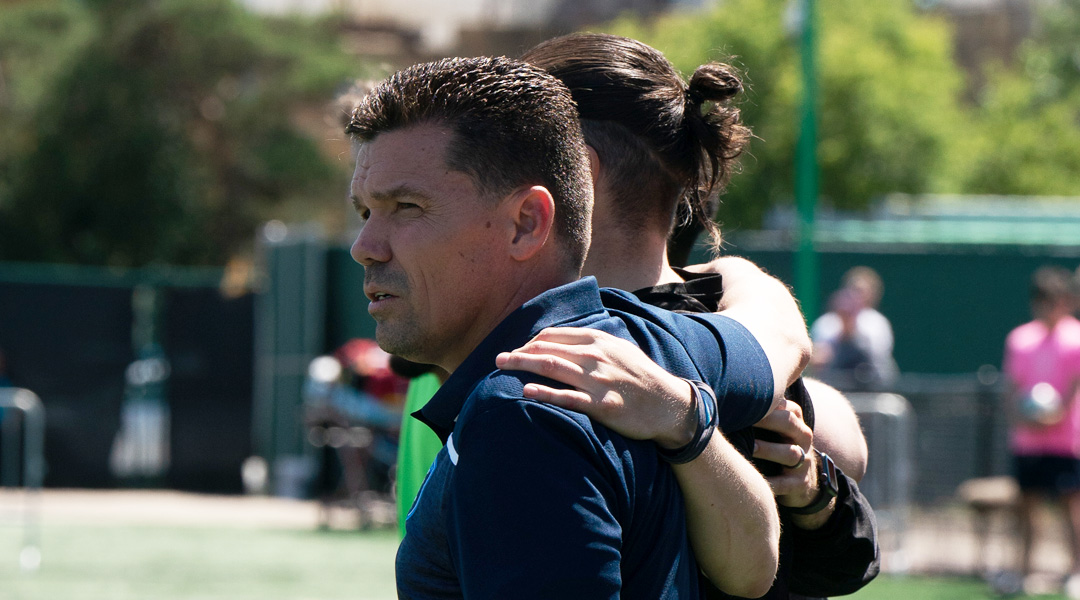 It’s been about a month since we confirmed that a prospective new owner was interested in acquiring FC Edmonton, the storied CPL side which has now operated without an investor at the helm for about a season-and-a-half.

Despite a shoestring budget, a tumultuous offseason, and a squad mostly comprised of inexperienced intra-league loanees, head coach Alan Koch has assembled a team that has proven competitive on the pitch, even if wins remain hard to come by.

So when people heard rumours about new ownership, you can bet Koch was all ears with the rest of us – though many assumed he had inside look that he actually hadn’t.

“Every time there is a rumour, imagine what my phone is like,” he laughed on the Wyngback Radio Podcast. “The texts, the calls, the messages! The day I believe anything has actually happened is the day the new owner actually picks up the phone and phones me. I look forward to it because we need that day as quickly as possible, so that we can start to build and plan for the future together.”

Koch explicitly stated that there’s still nothing for him to confirm or deny, as he’s received no direct contact about a new buyer himself – though he hopes that such a call comes in the near future.

“I’m very proactive, I’m a planner. That’s the difficult part of this project for me personally, is that almost since the very beginning since I’ve got this job I haven’t been able to plan with the people around me. That’s part of what we would all like to do and what we all need to do in order to set us up for success.”

The earlier revelation that FC Edmonton was without an owner was quickly followed by a tumultuous offseason that saw the club retain just two academy talents. It’s been a rollercoaster rebuild in the time since, with the league granting FC Edmonton a loan limit exemption that has seen some fourteen players arrive from other clubs.

Even after all that, planning ahead for the roster remains well-neigh impossible at the moment.

“The clubs that signed the players and loaned them to us, part of why they put that mechanism in place was to support the other owners who are paying for them. I understand and appreciate everything that the other owners are doing. The other clubs actually control those players, and decisions on them are actually outside of us,” explained Koch.

Even for the limited number of player signed directly with the club, it’s hard to tell what will happen until Alan Koch and the coaching staff know whether a new owner will arrive or not.

Obviously, he’d like to know as soon as possible – especially with players like Gabriel Bitar making waves. For now, however, things remain stuck in a holding pattern.

“We’ve been swimming up this river for a long time,” Koch says. “We need to get decisions made as soon as possible, but players and coaches can’t worry about things like that too much. We’ve just got to put our heads down and focus on our jobs.”

Despite the difficulties that the club has been facing, the team has announced over twelve new sponsors over the last two months alone. To that end, Koch credits a lot of hard, oft-undersung work going on behind the scenes.

“I think there’s a very small front office just because we are in survival mode, but that doesn’t mean that people in the front office aren’t work really hard to make sure we stay afloat, but also put ourselves in a good position to move forward.”

While sponsorships don’t fall within the wheelhouse of his many duties with the club, he also offered that he’s hoping that the relationships being formed and grown by the current front office can be reinforced and expanded upon when a new owner comes in, too.

FC Edmonton now find themselves with some fifty days between home matches, with the club set to undergo six away matches before they return home to face Halifax on August 28. Just another blip on a league schedule that hasn’t done Koch any favours.

Still, they steel themselves on march on – there’s no way for FC Edmonton to look but forward, whether that’s to the bitter end or a brighter future.