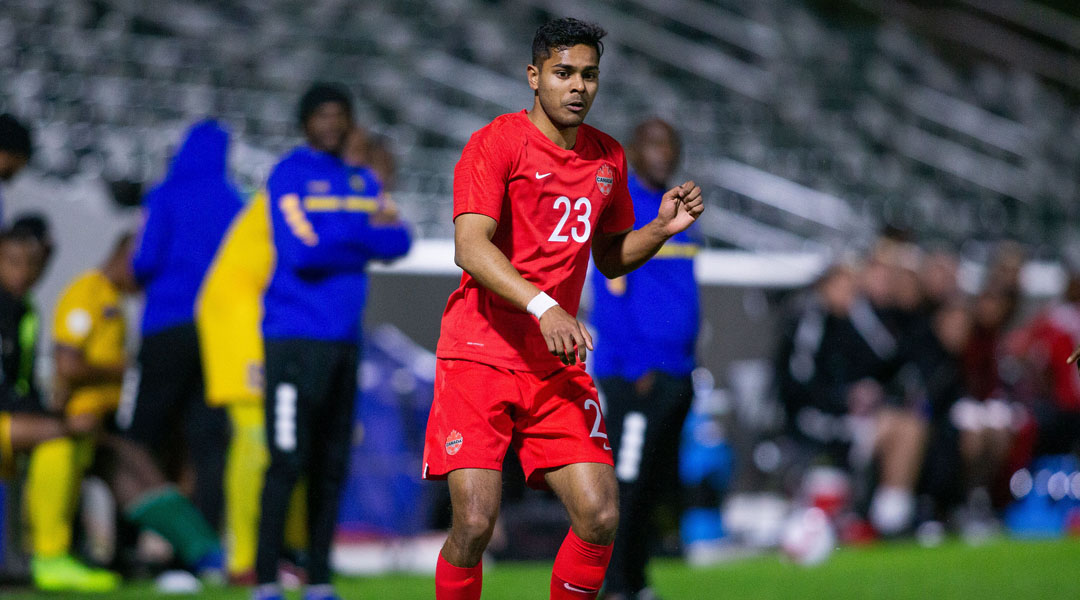 The 2021 FC Edmonton rebuild has been going at a breakneck pace, with 12 players signing for the club in the last 25 days alone. So far, it’s fair to say that the signing with the most buzz behind it falls on the shoulders of Shamit Shome: after spending four years with CF Montreal, the local Edmontonian has returned to the club which gave him his professional debut back in 2016.

Shome made 28 appearances for the NASL-era Eddies in his rookie season, which ended with a playoffs loss to Indy Eleven. It was after this that Major League Soccer signed him to a Generation Adidas contract ahead of the 2017 MLS SuperDraft, with Shome stating that his full season of NASL action played a big role in his preparedness for the MLS level.

Those days were really important for me, especially when I look at where I’ve come since then and how much of a better player and person I’ve become. It was a huge stepping stone for me, in the NASL days, to get a full season of games under my belt at such a young age. It also set me up well to move on to better things with the Impact for the four years after that.

Shome pays a great credit to former FC Edmonton head coach Jeff Paulus for his bright start, making note that the former academy director even had to pave the way for Shome to be academy-eligible: the Eddies previously required athletes to be enrolled in a particular highschool, which would have prevented Shome from joining the FC Edmonton Academy. Paulus got the entire rule changed to let Shome into the academy back when he was just an unknown kid hoping for a fair shot.

His first year with the academy saw him simultaneously score six goals in twelve appearances for the University of Alberta, winning a CWUAA Rookie of the Year Award for his efforts. He signed a professional deal with FC Edmonton the following year, stating that Paulus was a big driving force behind not just his entrance to professional sports, but getting consistent minutes under Colin Miller in his rookie campaign, too.

He was one of the biggest supporters for me to drive my career. We still have a good relationship, we still talk on the phone about football, which is great because he’s got a really great footballing mind so it’s fun to talk about all things football.

Shome says his time in Major League Soccer saw him adjust to a faster, more physical, and more technical world. He spent the last season playing under Thierry Henry, who instilled a new level of tactical awareness in the Edmonton native. While he says he didn’t get much of a chance to implement those lessons on the pitch in 2020, he’s eager to apply this new growth for the Eddies come the 2021 Canadian Premier League season.

Shome officially signed on with FC Edmonton in the first week of January, having finished his time at CF Montreal with 52 appearances and a single goal to his name. He joins an Eddies midfield featuring intra-league additions like Kyle Porter and Fraser Aird, some academy products, and new-to-Edmonton faces like Paris Gee and Raul Tito.

While Club President Eric Newendorp had hinted at a large amount of roster turnover, eleven of the club’s sixteen signed players so far have re-signed from the previous season. It was a tough campaign for the side in last year, with the Eddies going winless at The Island Games. Shome believes that their performances out east last year weren’t all doom-and-gloom, though: like Jeff Paulus, he states that several of those games could have gone one way or another:

There were a few games where the Eddies were very good, even in the opening game against Forge. I remember that they were dominating for a long period of the game, but unfortunately they lost. It just goes to show that among the new players we’re bringing in, there’s a lot of talent, but the guys we’re bringing back from last year are also really good. I think people might underestimate us a bit still, but hopefully they’ll learn soon!

Newendorp set a goal for the club to pick up one North Star Shield within the next five years, and Shome believes that’s certainly an achievable milestone. With the coaching staff and player signings they have, he says, they can really compete to win championships both in terms of the domestic league and the domestic cup.

It was two years ago that Shome appeared for CF Montreal in the aforementioned domestic cup against both York United and Cavalry FC, with the Edmontonian helping dispatch both sides as his side marched on to eventually win the Canadian Championship. Looking back on his matches against CPL opposition, he agrees with Montreal regular Samuel Piette that the CPL provided a good level of competition for the MLS side:

The level was really good. I don’t speak just for myself, some teammates of mine were surprised at the level that the CPL had. That was two years ago, so the level has got to be that much better. I know there’s good players in this league. It made sense for me to come here, it’s not like I’m taking a huge quality of play and pay cut to be here, because the level is good.

Given that the 23-year-old completed his engineering degree last year while also playing in Montreal, some fans had voiced their doubts that the Edmonton local would continue on in a league with a far lower salary cap than the MLS. In speaking with us, Shome revealed that he intends to continue his playing career for a good while yet:

I still know what I’m capable as a footballer, and I feel like I haven’t showed that off to the maximum yet. I definitely want to get that done first and play out my career to the best I can, until I can start to see where I’m declining, which I don’t expect to be for another seven-to-ten years. Right now, I’m 23 and going into a pretty important time in my career where I must focus on football and play a big part at FC Edmonton.

While the versatile athlete was deployed in several positions with CF Montreal, he arrives to Clarke Stadium as an outright box-to-box central midfielder. It’s his preferred position, and both he and Koch agree that’s where he’ll shine brightest.

If he can establish himself as a leading Canadian Premier League midfielder, Shome is hoping that the momentum generated from this will see him return to the national fold. It was just one year ago that Shome earned his first senior national team appearances, featuring in friendlies against Barbados and Iceland.

While he’s isn’t included in the national team’s current January Camp which features other CPL talents like Marco Bustos and Amer Didic, the 23-year-old believes a good showing this year could see him back on John Herdman’s selection list:

It’s just a matter of performing well and playing at a high level. I think I’ve showed that I’m capable of playing at the MLS level. I did that in 2019 with a consistent season, and I did it in bits and pieces this past season. I’m hoping that if I go to the CPL and I get a consistent set of games where I’m really a presence in midfield, not just for the Eddies but comparatively to the CPL, that’ll hopefully some doors open back up to the national team.

Of course, it remains to be seen what shape the 2021 Canadian Premier League season will even take. Club President Eric Newendorp has big plans for Clarke Stadium, but the possibility of another shortened season in a central bubble location is a very real one – it all depends how the pandemic unfolds this year.

The Eddies are posturing for a much-improved season following a disastrous Island Games, with new head coach Alan Koch stating that the club’s transition period will help it catch up with other CPL sides who have made bigger strides forward in the domestic competition. Last week saw the side secure the return of Canadian international Amer Didic, who will be another big piece of the Eddies’ season along with Shome.

FC Edmonton did not disclose the length or financial details of Shome’s contract.