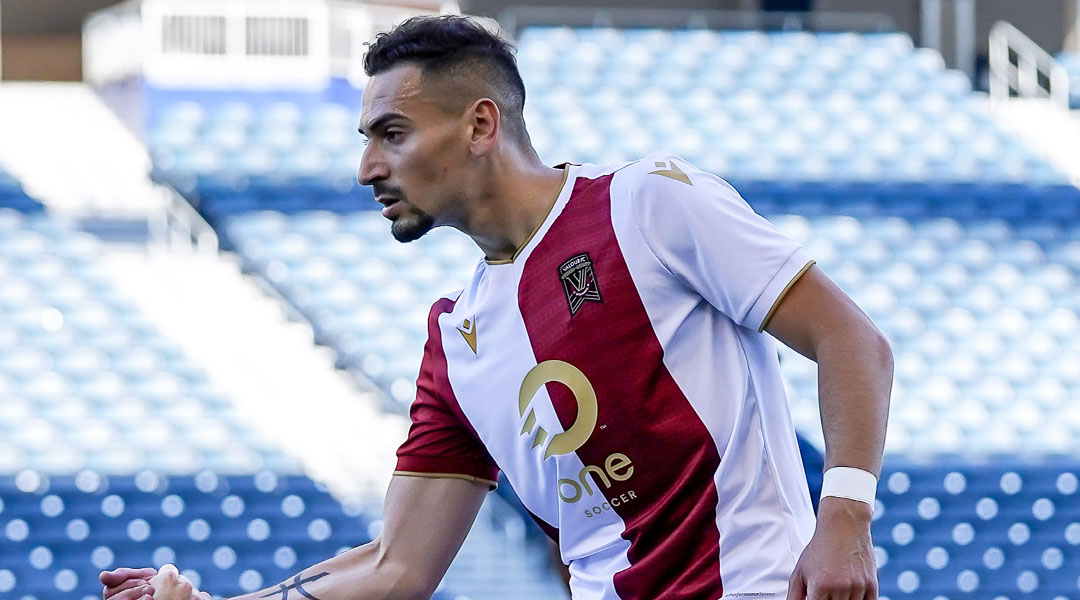 The move had previously been outed by Canadian journalist Thomas Nef, with Kacher’s arrival seeing him become the first fully brand-new Eddies addition for this season who isn’t arriving on loan.

The 26-year-old winger spent the last two years with Valour FC, for whom he made eighteen appearances and scored a single goal in 2020 that, by chance, came against the Eddies:

The Algeria-born attacker had developed through the CF Montreal Academy, spending time in the USL with FC Montreal, Colorado Springs Switchbacks, Real Monarchs, and Saint Louis FC before joining Valour FC in 2020.

He was unable to replicate his USL form at Valour under both Rob Gale and Phillip Dos Santos, with his move to Alberta coming as a ‘last chance saloon’ moment for his time in the domestic league.

“Masta is a player who has had some impressive performances and phases in his career,” said Eddies head coach Alan Koch. “We look forward to working with him and getting his game back to his top level. Masta is the type of player that fans in Edmonton will be able to get behind, as he comes into our environment with an opportunity to show that he can be a top creative player in this league.”

He joins the side as a free agent following a formal release that confirmed a few weeks ago. Koch is convinced that Kacher can enjoy a career revival in blue, and it’s fair to say the ingredients are there for such: with over 130 professional appearances between the USL and CPL, he could surprise a few doubters.

With FC Edmonton undergoing a roster rebuild that will see the side field several minimum salary athletes and young faces, Kacher will likely be one of the more experienced editions even at just 26 years old. That bodes well for his gametime, with his new club describing him as a versatile athlete who can line up in multiple positions across the pitch.

The Alberta-based side retained just two players from the 2021 CPL season after it was revealed club owner Tom Fath had run out of funding, with the league taking over operations on an interim basis.

With club owners funding Eddies player salaries, there have already been three intra-league loan additions from York United: Julian Ulbricht, Tobias Warschewski, and Felix N’sa will spend a season in blue, with the league granting an exemption status allowing for additional CPL loans from other clubs, too.

The 2022 CPL season will be a testing one for FC Edmonton, though some light has begun to peek through a cloudy forecast: the club has named former Oilers executive Jeff Harrop as its new Club President, who is confident that a new owner will be found.

Masta won’t have to wait long before squaring up against his former side: FC Edmonton is slated to kick off its 2022 CPL season against Valour FC on April 10.

The length of Masta’s contract is expected to be a one-year deal.