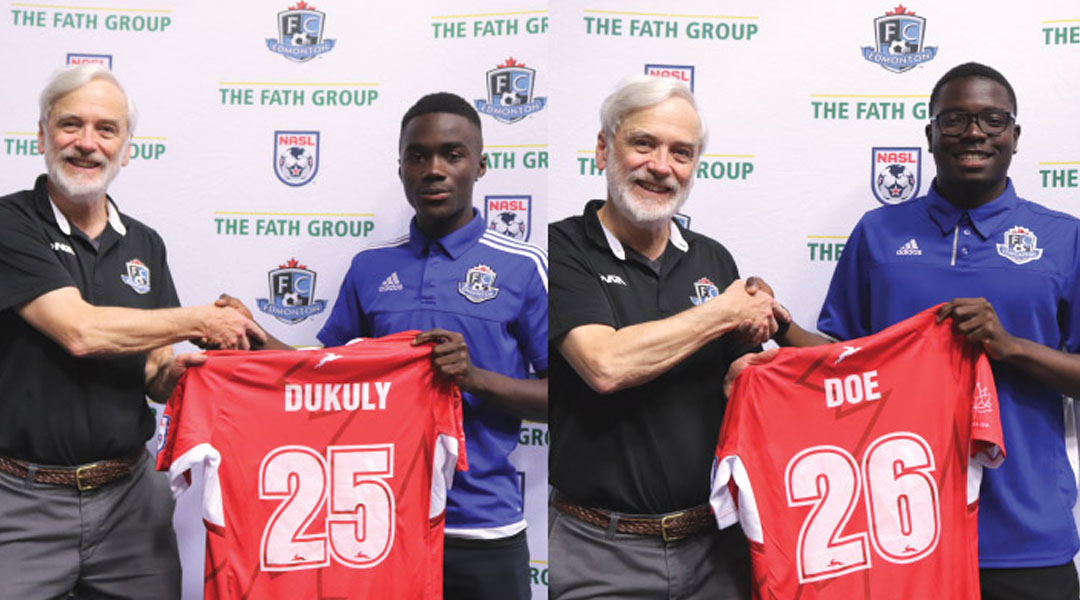 In 2017, both athletes made the transition from the FC Edmonton Academy to the club’s senior side in its final NASL season, where former Eddies gaffer Jeff Paulus was listed as a key piece to their progression during his academy technical director and assistant coach days.

South Bend Lions FC announced the signing of Doe yesterday, with Dukuly’s arrival having been announced a few days earlier. Both signings are pending league and federation approval.

Dukuly, 20, is a Ghanaian-Canadian attacking midfielder who made four substitute appearances for the Eddies in 2017, with his debut coming against a San Francisco Deltas side that featured the likes of Kyle Bekker and Maxim Tissot.

The club’s departure from NASL era put Dukuly’s professional career on the shelf for the last few years, with the South Bend Lions now taking a chance on the Accra-born youngster.

Like Allan Zebie, Dukuly had also developed at Edmonton Xtreme FC during his youth career before the Eddies Academy, and was even named to the 2017 Canada Games All-Star Team during his rookie season.

David Doe re-signed with FC Edmonton when the club officially began its Canadian Premier League era after a gap year, with the Liberia-born athlete making 13 appearances for the club overall. Four of these came in his debut campaign from the club’s NASL era, with 9 appearances coming over two seasons in the CPL.

CPL was also good because I saw lots of the players on my Canada team playing on a bunch of different clubs. Before and after every game, you’d see your friend and say hello, but on the field you didn’t talk. It was cool to experience that, and the league really helped all of us youngsters not only improve and play with older guys, but become who we are and find out who we wanted to be in the real world of soccer.

Prior to his time with FC Edmonton, Doe came through the St. Albert Impact program before 2016 saw him win the nationals with Edmonton Juventus. All of his Eddies appearances came via substitutions, with former FC Edmonton head coach Jeff Paulus stating he wished the five substitution rule would stay to give young athletes like him more game time.

While it remains to be seen how much game time both Doe and Dukuly will lay claim to with the South Bend Lions, they aren’t the only domestic athletes heading to the USL for 2021: Malyk Hamilton, Aboubacar Sissoko, and Jordan Hamilton all made the jump this year, too.

FC Edmonton has has retained eleven players from its Island Games roster, with new head coach Alan Koch bringing in nine brand new faces for the upcoming year so far.

A Hard Pill To Swallow: Pasquotti On His Injury And An ‘Uneasy’ Feeling