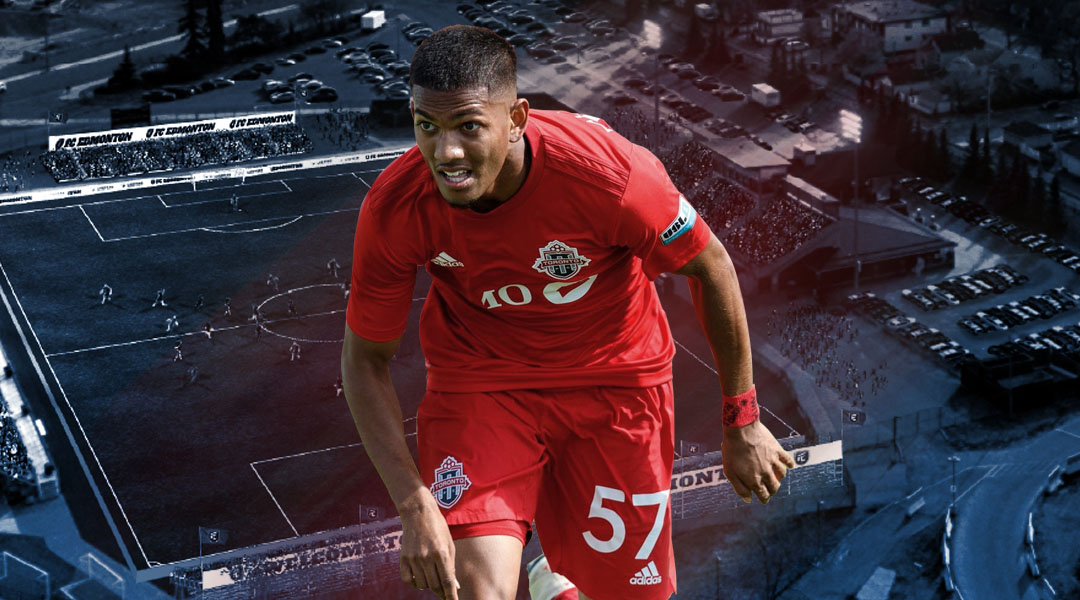 FC Edmonton head coach Jeff Paulus just teased that some Eddies announcements were due to drop this Monday, but former Toronto FC midfielder Terry Dunfield appears to have jumped the gun on at least one of them. On the most recent episode of the Come On You Reds Podcast, the CPL commentator revealed that Toronto FC II left-back Terique Mohammed was joining the Eddies on loan.

The news came up as Terry Dunfield and Gareth Wheeler discussed Toronto FC’s depth in that position after Richie Laryea filled in there for Justin Morrow during the MLS Is Back tournament. Dunfield summize that Laryea had done ‘a job’ in the position, then brought up Mohammed before disclosing that he was Alberta-bound (or PEI-bound, if you rather):

We’ve got young Mohammed Terique who’s going on loan to FC Edmonton. We’ll see how he does in the CPL’s tournament in Prince Edward Island.

Mohammed played his first full season of professional football for Toronto FC II last year after signing on with the side in late 2018, with the youngster crediting TFC icon and academy coach Danny Dichio for helping him get through some tough times both on and off the pitch. His first year of professional action in the USL saw him slot into the left-back spot regularly under coach Michael Rabasca, with the 20-year-old making twenty out of twenty eight possible appearances. He contributed two goals and two assists across the club’s USL campaign, too.


Last year saw Allan Zebie establish himself as the de facto left-back for FC Edmonton, with the versatile Bruno Zebie having filled in on a few occasions when Allan couldn’t play. While Kareem Moses, Son Yong-Chan, and Mele Temguia also started there once apiece, the loss of Bruno to Cavalry FC meant that Paulus needed to find more suitable competition for the left-back spot.

Paulus brought in former Halifax Wanderers and Vaughan Azzurri defender Duran Lee as a result, who is a left-footed full-back capable of making speedy runs up the wing. While the Wanderers deployed him in the middle of the backline to fill in for Peter Schaale, in Edmonton he’s expected to provide good competition for the left-back role.

Mohammed’s arrival will mean Paulus would have three good left-back options ahead of him for the 2020 Canadian Premier League season, which is due to kick off in two weeks on Prince Edward Island. It would also top off the FC Edmonton roster at a full twenty-three players, which is the maximum size for a CPL side.

The loan has yet to be confirmed by FC Edmonton, but with Dunfield stating it matter-of-factly during the COYR Podcast it appears very likely to happen. The youngster is also represented by Felkrem, an agency with ties to six players currently plying their trade in the Canadian Premier League.


Rumours are circulating that other MLS-to-CPL loans will be announced in the coming week as Canadian Premier League sides finalize their rosters. With clubs departing for the bubble tournament in Charlottetown next weekend, fans won’t have long to wait to see what other young faces join the league on loan – especially with the likes of Paulus and Gale already teasing signings.

Thus far the only loaned players in the league right now are Robert Boskovic (Toronto FC II), Gianfranco Facchineri (Vancouver Whitecaps), and James Pantemis (Montreal Impact), though Mohammed is expected to join these ranks this Monday. There have also been rumours that Julian Dunn will be loaned to a club in the burgeoning league, while Terique’s former TFC II teammate Shaan Hundal has arrived permanently by way of Valour FC.

Source: Come On You Reds Podcast