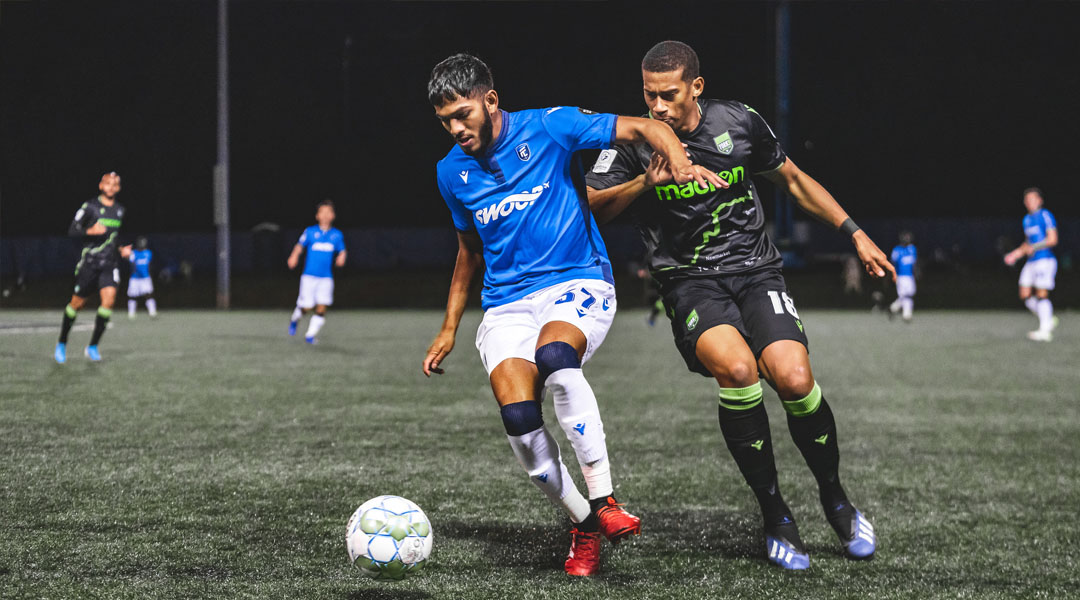 Canadian left-back Terique Mohammed is heading back to FC Edmonton, but not as a loan this time around.

The 22-year-old defender has signed a brand new deal with the Eddies that will see him remain with the side for the 2022 CPL season, where he’ll be expected to be one of the more veteran presences in a very young roster.

Mohammed had looked sharp on loan with York United last season, with the defender playing in nine straight matches before an injury saw his time at York Lions Stadium end early. His return to League of Ireland side Dundalk FC didn’t last too long, with the defender now back for for his third domestic playing stint in just as many years.

This won’t be his first spell in blue, with the former Toronto FC II defender having been loaned to the Eddies during the Island Games season in 2020. He made five appearances under Jeff Paulus, though a red card saw him miss a segment of the shortened season before he contributed a sharp assist against Valour FC upon his return from suspension.

His time with York United also saw him collect an assist against the Winnipeg-based side, too.

“We’re excited to welcome Terique back to FC Edmonton,” said Eddies head coach Alan Koch, “we’re hopeful that this will be a very positive season in his progression on and off the pitch. He’s a very talented player that has good technique and the athletic ability to play for us in our system of play.”

Mohammed joined the Toronto FC Academy system in 2016, crediting academy coach Danny Dichio for helping the youngster develop both on and off the pitch. Progressing through the ranks from Toronto FC III to Toronto FC II, he signed a professional contract with the side in late 2018 and featured regularly under head coach Michael Rabasca, scoring two goals across 20 appearances.

His career has seen several moves within a short time since, though there’s no question that Mohammed has the right skills for CPL action. His third time in the league will be his first experience not on loan, so it’ll be interesting to see how things unfold for the young left-back as he hopes to carve out his next steps.

He’ll be expected to start ahead of T-Boy Fayia, though the latter had also been deployed on the right flank throughout his rookie campaign lyear. The majority of the FC Edmonton roster has yet to be revealed, though the club did announce the arrival of draft pick Kairo Coore yesterday.

FC Edmonton currently finds itself in the midst of a tough roster rebuild on a minimal budget. Without a new club owner taking the reigns, the Eddies are expected to be heavy underdogs in their fourth-ever CPL campaign. The boys in blue will kick off their 2022 CPL season against Valour on Sunday, April 10.