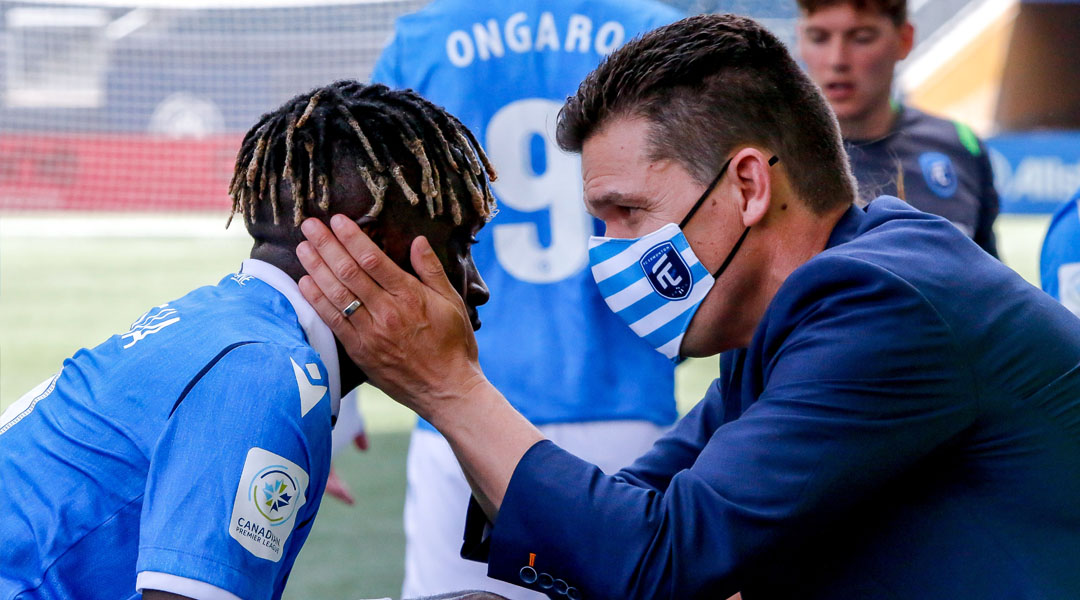 While Canadian Premier League side FC Edmonton has the most history out of any club in the league, the club’s first two seasons in the new domestic league saw the Alberta-based side struggle to put together results. With the club recruiting head coach Alan Koch after a winless Island Games, he told us that there was some catching up to do right from the start – and that mentality now extends into the 2021 CPL season.

Yesterday saw the club kick things off with a narrow one-nil loss to Atletico Ottawa. While a much-transformed Eddies side put out an impressive first half and fought hard in the second, a late goal from Viti Martinez sealed the result for the Ottawa-based side.

For Koch, seeing fatigue catch up with his team at the end was no surprise: the Eddies had to undergo a limited preseason without any competitive fixtures, while Atletico Ottawa’s own build up to the match included a two-month stint in Spain complete with friendlies, world class facilities, and ideal weather conditions.

We hadn’t replicated anything remotely close to what we had to play today, and I’ve said it before: we were the underdogs going into this game, and I’m sure we’ll be the underdogs in several more games that we’re going to play. We’ll embrace that role. it’s just disappointing for the guys. They deserved to get something out of the game today, and it’s unfortunate that we didn’t.

Koch went so far as to state that Atletico Ottawa would have been expected to be miles ahead of the Eddies, but that he was proud of the way the squad performed from the start to the end. The gaffer had made some unexpected moves in terms of positional duties, with the likes of Jeannot Esua and Fraser Aird interchanging on the right, with German centre-forward Tobias Warschewski getting the start beyond Eddies familiar Easton Ongaro.

To that end, Koch states that the 2021 FC Edmonton squad rounds out to be a very pliable team, and it’ll need to be given that it has so many games to play on turf in a short window. The club will undergo seven more fixtures in the next 27 days, with its next match coming against Forge FC on Thursday.

Despite the loss, there are certainly positives for Koch to take away from the game: the Eddies had an open goal xG of 0.91, with the biggest chance coming when substitutes Roberto Avila and Easton Ongaro combined immediately after coming on for what should have been a tap-in. If not for a sharp save from former Eddie Dylon Powley, it could have been a go-ahead goal that would have both changed the shape of the game and put Ongaro top of the all-time CPL goalscoring chart.

While some fans may have raised an eyebrow when Ongaro didn’t get the start, Koch says that both he and Warschewski will play big roles with his reformed side. The German forward looked to have put the Eddies in front following a set piece in the 24th minute, with the goal being called back for a tight offside goal that Koch – having not seen a replay – didn’t want to comment on.

Given how tough it will be for the Eddies to deal with a packed fixture schedule on turf in a bubble, fans can likely expect to see Koch rotate his selection all around the pitch. Given that the former German youth international evidently impressed in his debut, however, it’ll be interesting to see whether he clocks in another start in front of Ongaro next week.

Tobias is a good player. He had a very, very good career as a young player in the German league. He started getting elevated through the ranks, and didn’t quite get into the top of the German game which almost nobody does, to be quite frank. We’re almost getting a second chance here to show what he can do.

The Eddies looked fairly solid at the other end of the pitch, though the Alberta-based side saw three defenders collect yellows: Jeannot Esua, Ramon Soria, and Amer Didic, the latter of whom didn’t mince words on his reflection of the game:

It was always going to be a tough game. We worked out asses off for ninety minutes, and unfortunately we went down one-nothing. We had our chances, we played well, and we worked hard. At the end of the day, I commend the guys for that because that’ll set us up for success in the future. But today, it’s just unfortunate.

The Eddies now rest seventh in the league table with four teams yet to play, and are ahead of the Halifax Wanderers on goal difference. With Koch’s team having wilted at the end due to fatigue, there’ll be a lot of eyes tuning in today to see how Forge FC and York United – who had essentially no preseason camps at all – will perform in their opening fixtures.

FC Edmonton’s next match will take place against Forge FC on Thursday, and will be streamed live on OneSoccer.