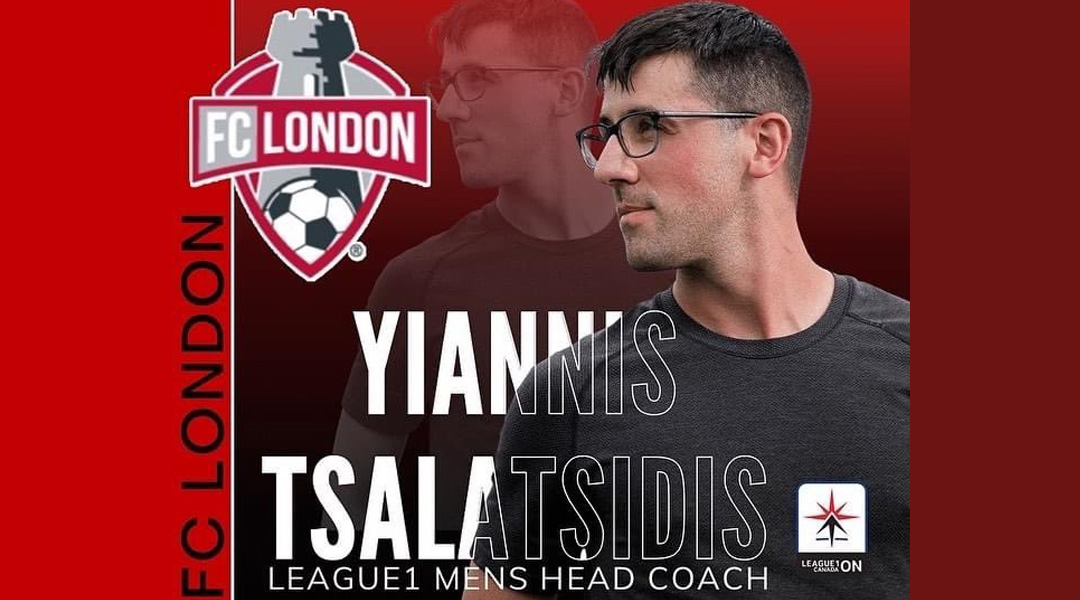 The semi-professional side was previously been helmed by Ruben Quintao, who’s departure followed the team’s last-placed finish in the 2022 season.

With promotion and expansion coming in 2024, the new gaffer will have a lot on his plate if he’s to steer the side clear of a second division placement.

Tsalatsidis first arrived to FC London in late 2021 as a high performance director, having previously spent two seasons with CPL side Cavalry FC as an opposition analyst and individual skills coach.

“Yiannis is a head coach that has an incredible eye for the game. His attention to detail and ability to recognize teams strengths and weaknesses will serve him well as head coach,” offered York United head coach Martin Nash, who had worked with him at Cavalry.

Holding a Canada Soccer National A License, Tsalatsidis previously held various roles within Canada Soccer’s Regional Excel program and had been a remote analyst for the 2019 FIFA Women’s World Cup. He’s also helped with some U-17 and U-20 national team camps, and had assisted with the University of Saskatchewan Huskies women’s team, too.

His own time on the pitch saw him receive U SPORTS Academic All Canadian honours while with the University of Winnipeg, with FC London’s new gaffer having picked up gold at the Men’s Canadian National Challenge Trophy in 2009.

See Also: Five League1 Ontario Players Who Could Jump To CPL This Year

“London is a sleeping giant,” said Yiannis following his hire. “The next big Canadian national team player will come from here, I am certain of this. This city has the perfect conditions for developing talents. From the grittiness of the players to the quality of coaches we are attracting here, it’s only a matter of time.”

FC London has been a historically strong performer in League1 Ontario, with a men’s team that finished first on two occasions since launching in 2016, and a women’s team who have secured three championship titles for the club.

Former FC London head coach Michael Marcoccia had been expected to lead Electric City FC through its inaugural campaign this year, but left due to personal circumstances and won’t be returning back to the gaffer’s post with FC London.

With Tsalatsidis now at the helm, the Toronto FC-affiliated club will be hoping to restore itself to glory in league play.

“Our playing style and principles will also help in this aspect. It’s important first and foremost we play a type of football the players enjoy and one the fans can feel, while at the same time also working very hard to grow players individually within the team concept, to prepare them for the next step in their careers. This is what will separate FC London from the rest.”

The 2023 League1 Ontario season will be a crucial one for the club, especially with the aforementioned arrival of promotion and relegation coming after that.