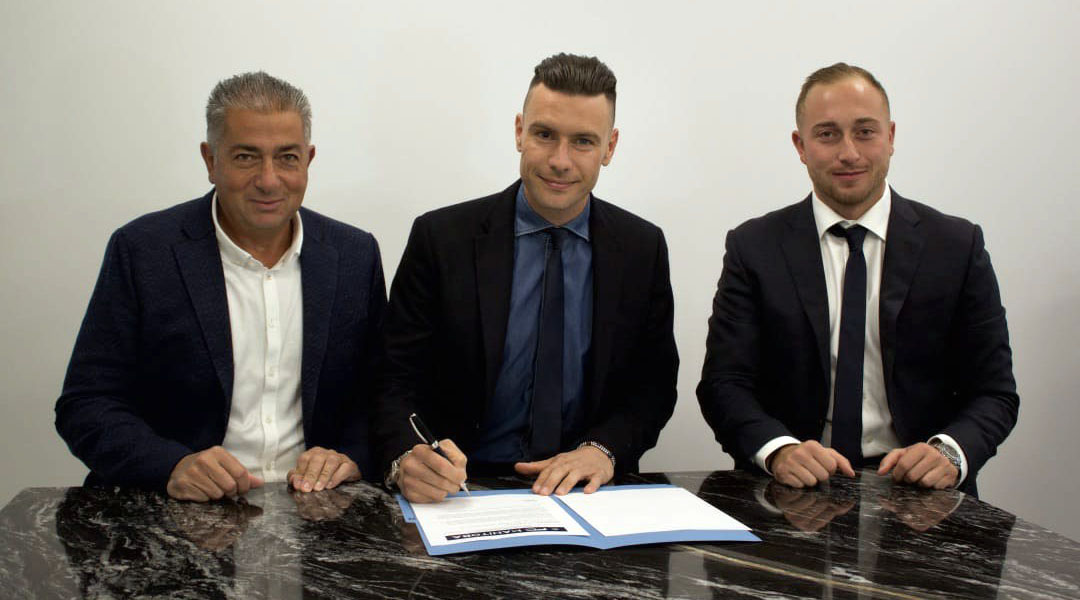 USL 2 side FC Manitoba made waves earlier this month when it announced the signing of former Serie A striker Michele Paolucci, who most recently plied his trade with Canadian Premier League side Valour FC.

The 34-year-old arrived to the club as both a player and to help the members of club management, making his debut in an exhibition match against affiliate side Ital-Inter SC and scoring a truly stunning goal in the process:

Now having settled into his new role, Michele spoke with Northern Tribune about how a veteran striker with over three hundred professional appearances across likes of Italy, Romania, and Malta found himself intimately attached with Winnipeg and, of course, the idea of building a new club.

At it’s base level, Paolucci’s newfound connection with FC Manitoba came from his close connection with the Garcea Family, which is a name that will sound familiar to those local to Manitoba: the Garcea Group Of Companies owns multiple construction-based businesses, which granted the family enough capital to purchase WSA Winnipeg and re-structure the club as FC Manitoba.

Paolucci’s connection with the family began when he was still plying his trade with Valour FC, with the former Juventus striker noticing former Canada U-20 player Enrique Garcea during a training session. The duo eventually struck up conversation, which led to dinner with Enrique’s father John and – as Paolucci described – an interstellar connection that played a key role in his decision to join the club.

After the inaugural CPL campaign concluded, Paolucci flew back to Italy to enjoy the offseason in his home country with plans to return to Valour, but that plan shifted as December rolled around. John Garcea called him to wish him a Merry Christmas, revealing that the Garcea Group was in the midst of purchasing USL2 side WSA Winnipeg and rebranding the team. If Paolucci wanted, the offer was there for him join the project on the ground level.

He asked me if I would like to involved, and if I can help him in this adventure as a player, and be close to him and Enrique, and with the management of the team. I told him I’d let him know, and within five minutes I was already searching for my flight ticket to go back to Canada. You know, I can’t say no to them, and also the project for me is very incredible because we are very passionate people, and we love this sport.

Paolucci describes the venture as not only a business, but something the group really wants to do. With the USL2 side due to face US-based competition in the future, he says there’s nothing quite like it in Manitoba. Of course, a lot of the club’s impact happens closer to home, too.

FC Manitoba has structured itself as part of a unique player pathway: general manager Enrique Garcea (of the aforementioned Garcea Group) and Jorge Cabral (part of the club’s newly-minted front office) are the head instructors at 1v1 Futbol Academy, which aims to be the launching pad of young talent in the Winnipeg area. Players who excel in that environment can make the jump to Ital-Inter SC in the Manitoba Major Soccer League, an affiliate side of FC Manitoba, before potentially jumping up to the USL2 club itself.

It’s similar in shape to Cavalry FC, who have a U-20 side in the Alberta Major Soccer League and a strong feeder club in the Calgary Foothills, with top players at the USL2 side potentially moving up to Tommy Wheeldon Jr.’s CPL club.

Of course, the pathway to professional soccer in Manitoba doesn’t end with FC Manitoba: Paolucci says that players who impress the newly-minted club could see themselves in a carefully curated pipeline to MLS or potentially even Europe, though it’s worth noting that 1v1 Futbol’s biggest product so far is Valour FC’s youngest-ever goalscorer, Tyler Attardo.

It’s a process. We can put in contact the academy with the rest, right? This is very positive, because the young players that deserve to grab this opportunity and make a good process, they are more than welcome. We can take care of the guys, we can have many, many things that were not possible before. They can compete, they can play, they can improve. The last step, we know that the USL2 is very popular in the USA. In the last year, many players from USL2 arrived to MLS. For us, it’s important that we can show the Canadian talent in this league. They have to know that if they join with us, their chance to arrive at the professional level is there.

Helping nurture this untapped talent was a big draw for Paolucci, who described the club’s technical staff as an ambitious group. He also noted that it wasn’t just the Garcea Family that drew him back to Manitoba: it was also the community that had welcomed him so warmly last year, and the chance to create something and establish a lasting legacy. While Paolucci has had a well-traveled career, this is a move made with the long-term in mind.

The relation with Garcea, the fact that I feel at home when I am here, the fact that in this city we can make something new, and the fact that everyone was nice with me from the first moment, this helped me decide that Manitoba was the right place for me to start to build a future.

So, what does the future hold for FC Manitoba itself? Paolucci is keen to use his influence to help grow overseas connections for his local side. The 34-year-old made a coy mention that he has already received some messages of inquiry about FC Manitoba from overseas, including one he disclosed as being from a Serie A side’s sporting director, among other European coaches who wanted to keep tabs on player development in the USL2 side. Paolucci says this kind of connection is new for both Winnipeggers and Manitoba in general, and it’s something he believes can help them improve.

Beyond that, Paolucci isn’t set to be the only veteran talent to join the side: while the striker says the club already has a good base of players, he revealed that the side will be signing some additional talent in the next year or so to help the core squad develop.

The club will also be bringing in a European coach with professional experience from a top European league. This as-yet-unknown head coach was due to arrive for the 2020 season, but the COVID-19 pandemic has delayed both the season and his arrival to 2021.

We are very excited to add this coach with us, because he will be one more step for the club to go in the direction we want, but we need somebody that knows how to bring the European mentality, and we need to bring that here. I’m very excited for this. I don’t want to say more, but we will make all the things properly.

Paolucci describes that mentality as a combination of Canadian organization and an Italian passion that is very prevalent in the club’s identity, ownership, and affiliation. On the pitch, the side plans to play possession-oriented attacking football with a sense of aggression. With FC Manitoba (and its former identity in WSA Winnipeg) never having finished above fifth place in the Heartland Division of USL2 (formerly PDL), there’s certainly room for the reinvigorated side to grow.

The club’s marquee signing is adamant that next year will be a big event, with what will hopefully be a full USL2 season backed by the arrival of new talent and an as-yet-unknown European coach. Michele’s presence will also help develop the side’s existing talent, with the 34-year-old donning the captain’s armband to lead the newly-minted side through its first full calendar year as FC Manitoba.

While whatever happens remains to be seen, Paolucci is confident that the future is bright for both his new club and the soccer scene in Winnipeg itself. Like League1 Ontario side 1812 FC, the club hasn’t shied away from ambitious goals, offering Paolucci the opportunity to stamp his name on a lasting legacy – though it remains to be seen how the COVID-19 pandemic shapes the 2021 season, too. If all goes well, Paolucci’s stunning goal against Ital-Inter SC will be one of many that the veteran striker scores for FC Manitoba, though he evidently plans to contribute off the pitch, too.