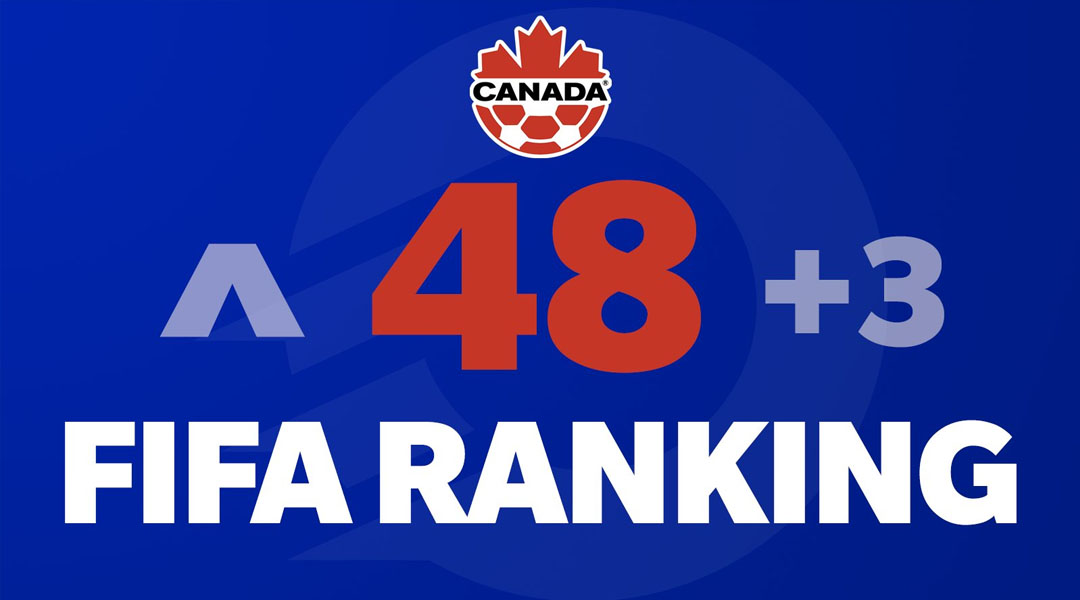 Canada has moved into the Top 50 of the FIFA World Rankings for the first time time since 1997, hitting the rank of 48 during the most recent update by FIFA.

As per OneSoccer’s Adam Jenkins, this marks the country’s highest ranking ever since December 1996, when Les Rouges hit 40 before sliding out of the top 50 the following year.

Canada has found itself in great form as it undergoes a long road to the 2022 World Cup, with star players like Alphonso Davies, Jonathan David, and Cyle Larin all stepping up amid a new generation of Canadian talent.

The rise in rankings has massive implications for Canadian national team athletes who may be hoping to secure work permits in England, where a tough points-based work permit system was employed post-Brexit: athletes who have played 70-100% of a Top 50-ranked national team’s matches over the last 24 months will get 15 points (or 10 if they’ve played 60-69%) towards an English work visa, which requires 15 points for a Governing Body Endorsement needed for the work visa.

There are other ways athletes can earn points for this, but a 15 or 10 point boost is a significant boost that ultimately comes as game-changer for Canadian national team athletes hoping to secure moves to England. With Major League Soccer considered a tier 4 league by the country, Canadians in the league prior to the shift in rankings would have a much more difficult time securing an English work visa.

TSN indicates that multiple English clubs had expressed interest in Toronto FC full-back Richie Laryea, with the 26-year-old having made waves for both his fast-paced attacking talents and steadfast defending. With Canada now cracking the Top 50, the TFC defender – who has a guaranteed salary of $226,953 – could find himself admidst a multitude of higher-paying offers overseas.

Canadian national team veteran Atiba Hutchinson had also discussed recommending him to Turkish side Besiktas, where Canada’s Cyle Larin also plies his trade. Other national team athletes like Alistair Johnston, who is on a $73,000 contract and is really starting to clock in national team game time, would likely be considered a bargain even with a big pay bump abroad.

Canadian youngster Tajon Buchanan recently inked a new deal that will see the forward off to Club Brugge at the end of the MLS season.

Canada’s rise in FIFA rankings makes it the fourth-highest Concacaf nation in the world, behind Mexico (9), USA (13), and Costa Rica (45). Les Rouges currently finds itself third-place in the third and final round of Concacaf World Cup Qualifying, having already secured big away draws to higher-ranked Mexico and USA in previous international windows.

If the country can maintain a top three position in this round, it will secure passage to the 2022 World Cup, marking Canada’s first time to the premier international competition since 1986. National team head coach John Herdman has done wonders instilling a winning team culture in the side since joining in 2018, when the country was ranked 94th.

The women’s national team is currently ranked sixth following an Olympic Gold win, and is now set to undergo the beginning of a Celebration Tour in Ottawa and Edmonton.