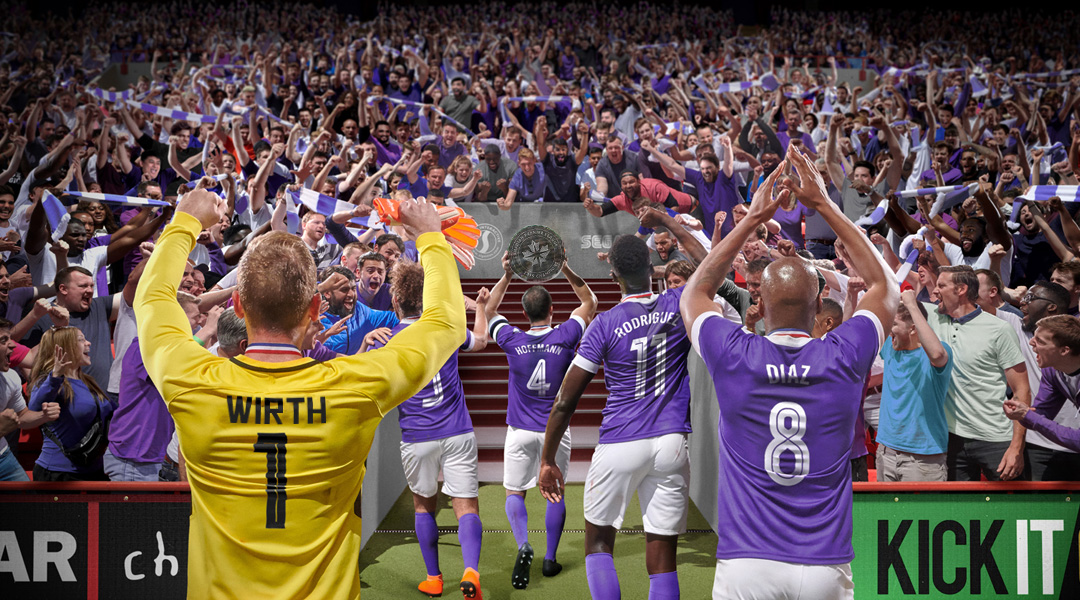 Boy, did history ever end up differently here: FC Edmonton won both the spring and fall season, with Pacific FC facing them in the two-legged Canadian Premier League Finals by way of being the next cumulative best team across both seasons, one point ahead of perpetually third-placed York9 FC.


Virtual Jeff Paulus saw out an unprecedented 5-0 win across both legs to hoist the game’s version of the North Star Shield, riding the wave of golden boot winner, domestic U-21 best player, and CPL MVP Easton Ongaro’s 14 goals in 26 appearances. There was no goal drought in this alternative timeline, with team captain Tomi Ameobi scoring 9 in 21 to finish third in the golden boot race.

Matching with real life, the Halifax Wanderers finished bottom of the league table once more, though in this timeline the Wanderers executives swapped one former national team coach for another by way of replacing Stephen Hart with Frank Yallop in the fall season.

Halifax’s bold move appears to have paid off, with Yallop leading a reinvigorated (and rebuilt) Wanderers side to a spring season win after a hefty roster refresh that saw Yallop poach Nine Stripes defenders Roger Thompson and Diyaeddine Abzi while building an attack around Moses Danto, a Winnipeg-born player whom many expected to join the CPL’s real-life inaugural season.

Now-permanent Pacific FC coach James Merriman would see his side to a second final in a row by way of winning the fall season, utilizing a squad which heavily banked on loanees from the MLS. Despite bringing in Anthony Novak from Forge FC and Shaan Hundal from TFC, the west coast club still suffered a 2-1 loss to the Wanderers in the first leg.

In a too-strange-to-write coincidence, the Wanderers won that match courtesy of a goal from 22-year-old Brazilian Juninho Rocha, who came to the Halifax Wanderers from a Uruguyan team named Montevideo Wanderers. One can only imagine the tifo the Privateers would have for him.

The second leg would see a brace from now-Pacific FC man Anthony Novak turn the tide and bring the North Star Shield over to the west coast.

This time around, Cavalry FC man Nico Pasquotti won the Golden Boot and CPL MVP for a stellar season that saw him see the back of the net 14 times, while Merriman won coach of the year for his efforts in securing PFC the shield.

By this point in time, only Jeff Paulus and James Merriman remain as CPL head coaches from the start of the simulation (Michael Silberbauer isn’t set to start for PFC in Football Manager 2020).

The spring season of 2021 would see the reigning champions finish second in the spring, two points behind a Forge FC side now headed by former Chivas USA coach Jose Luis Real. Despite a breakout season from Etobicoke man Pancho Fernandez, the hammer would see their fortunes turn as they slid to a sixth-place finish in the fall.

So, who capitalized in the fall? The Halifax Wanderers, who booked their second CPL finals date in a row by finishing ahead of Cavalry FC by games won. Cavalry FC fans will have felt hard-done by: the club finished top of the cumulative table, but never claimed the fall or spring season under the tutelage of now-team captain Marco Carducci.

The Wanderers won the first leg 2-0, but a brace from Fernandez would see Forge FC bring the CPL Finals to penalties for the first time ever. The winning penalty to deliver the North Star Shield to Hamilton would come from a former York9 FC player: Emmanuel Zambazis. The sixth-place fall season finishers had won the championship, finally reflecting the feats of their real-life counterparts.

For the second year in a row, Nico Pasquotti would claim the Golden Boot with 15 goals scored from 26 games, a solid five goals ahead from the Wanderers’ Moses Danto. This time around, a now 20-year-old Marcus Velado-Tsegaye would claim CPL MVP awards, with Forge’s Jose Luis Real claiming coach of the year.

2022 would see an almost unrecognizable Eddies side claim the spring title, with only three of the original CPL squad members – Connor James, Amer Didic, and Prince Amanda – remaining with the team. Now under the guidance of former Canada assistant coach Mauro Biello, reigning champions Forge FC finished dead last in the spring, though the club would make history as the first-ever CPL side to make the Canadian Championship Final, falling to a 4-2 aggregate loss against the Montreal Impact.

The fall season would see Cavalry FC finally book their spot in the finals, and it’s no surprise why: the club brought in Tristan Borges (who scored six goals), with Nico Pasquotti having a banner year. The now 27-year-old played every game of the season for Cavalry FC, bagging a league-record 16 goals along the way.

Cavalry FC draw the Eddies 1-1 in the first leg, but would take the second leg 2-1 on the back of a Tristan Borges penalty.

Unsurprisingly, this season would lead Pasquotti to his third-ever Golden Boot, though his now-teammate Cole Turner (formerly of the Philadelphia Union) would win the CPL MVP award after contributing 2 goals and 14 assists.

Captained by former Montreal man Jason Beaulieu and featuring a squad of former TFC men Liam Fraser, Shaan Hundal, and Manny Aparicio (uh, that’s a twist), Halifax Wanderers marched their way to a spring season record 31 points for a first-place finish, confirming their attendance in the CPL Finals for the third time in five years.

Halifax would finish second in the fall, three points behind their coastal rivals Pacific FC. The west coast team is now mostly comprised of in-game regenerated players, though the likes of Emile Legault, Kadin Chung, Nolan Wirth, Alexander Gonzalez, and Terran Campbell still remain at the club, which is now managed by Dale Mitchell. With Merriman’s departure, none of the head coaches who started this Football Manager 2020 playthrough remained.

A 2-1 win for Pacific FC in the first leg would allow the Vancouver Isle-based team to play out for a fairly comfortable nil-nil draw in the second leg, becoming the first Canadian Premier League team to hoist the North Star Shield twice. Anthony Novak, by now a Pacific FC legend, had fired home a shield-winning goal for the second time in his career.


Over at York9 FC, a strange twist of fate saw the only remaining inaugural squad member to be Cyrus Rollocks. The virtual Nathan Ingham got to realize an ambition his real-life counterpart aims for, jumping to Major League Soccer side Inter Miami as a 30-year-old veteran keeper.

Pasquotti didn’t win the Golden Boot this time around, but only because he had transferred to Saudi Arabian side Al-Fayha. Regenerated players took the first two spots, with Novak coming in third with 11 goals.

Valour finished low-to-mid table each season, never ultimately able to make it into the finals – though it’s interesting to see that CPL Emergency Goalkeeper Svyatik Artemenko eventually broke into the squad and became Vice-Captain.


2023 also saw Marco Carducci finally make his debut for Canada in a 4-0 friendly win against Curacao. He would make two more appearances in a Gold Cup run that would see Canada once again get one-upped by the United States.

Easton Ongaro – who had played in Saudi Arabia for four years at this point – had been capped by Herdman eleven times. Toronto FC Captain Michael Bradley, now 37, is due to retire at the end of the season.


Of course, every playthrough will garner different results given how many different actions are taken by the AI in each playthrough, but it’s certainly neat to see what one playthrough of Football Manager 2020 thinks is on the cards for the Canadian Premier League – though it doesn’t reflect things like the league’s potential expansion to Saskatoon or Montreal.

Gamers who prefer titles that let them control players on the pitch directly aren’t totally out of luck, since a Pro Evolution Soccer CPL modification is currently out there. While the EA Sports FIFA creative director says he’d love to add the burgeoning league to the game, there’s been no public progress on that front.

Whatever happens, there’s always Football Manager – and given that the modification can simulate a playthrough into the foreseeable future, that’s plenty of virtual CPL action for those who have the time to take their favourite club to the top.

Fans interesting in downloading the Canadian Premier League modification for Football Manager 2020 can find it here.