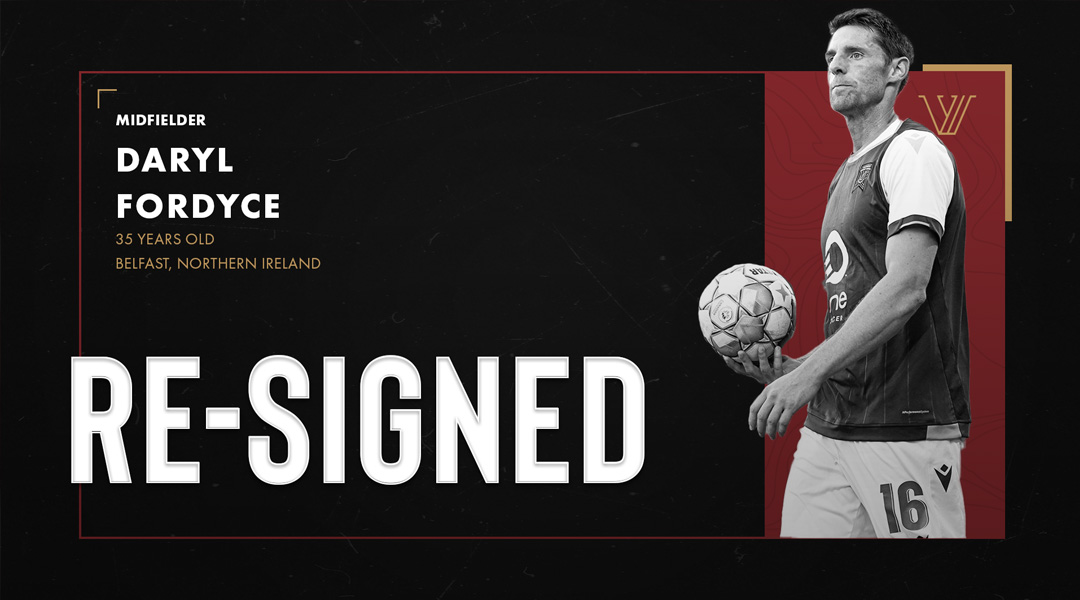 Valour FC’s Daryl Fordyce is returning to Winnipeg for a third season.

The club announced today that it had re-signed the 35-year-old athlete, who revealed that he had initially planned to hang up his boot after the last season. 2021 saw Fordyce make 28 appearances for Valour FC across all competitions, however, showing that the veteran athlete still has a lot left to give.

The Belfast-born utility player has now racked up 33 all-time appearances for Valour over the last two years, roughly a quarter of the times he played for FC Edmonton in its NASL days. With Fordyce having obtained permanent residency some time ago, he’ll continue to count as a domestic athlete just as he did when he first arrived from Sligo Rovers in 2020.

Daryl is a player that brings a lot of experience to the team. It’s important to surround our young players with individuals who have experience and are strong on and off the field, and Daryl is that. He’s a very reliable player, brings a lot of balance in the midfield, and provides valuable leadership.

The veteran midfielder co-captained the side alongside Andrew Jean-Baptiste last year, contributing two goals and two assists. Now, he aims to help the Winnipeg-based side secure its first-ever playoff position before he hangs up his boots.

“I want to win the league before I have to retire,” he states, ” and to see what we have in place already and knowing that Phil [Dos Santos] can add to it along with his coaching qualities on top of that, I know we have a chance. I haven’t won a trophy for 10 years now, and it’s one of the greatest feelings you’ll ever have.”

When the time does come to Fordyce to hang up his boots, his eyes are firmly set on coaching. In a recent CPL social media video, several of his teammates made mention that he’s always discussing and explaining tactics to the squad, where they backed him as an athlete they could see make the transition to the touchline.

“Coaching is one of my passions,” he states, “but at this moment it’s still being out there on the pitch. I remember at the end of the season looking around at every player in our locker room and saying to myself, ‘I’d go to battle with every single one of these guys’.”

With over 320 professional appearances to his name, Fordyce has proven to be a great influence on several of the club’s younger professionals. While Jose Galan is hoping to return for a similar reason, thus far the tema has only confirmed the additional signings of Andrew Jean-Baptiste, Stefan Cebara, Diego Gutierrez, and Raphael Ohin.

The financial terms of Daryl’s contract were not disclosed by the club. It is believed to be a one-year deal – enough for one last dance, if you will.