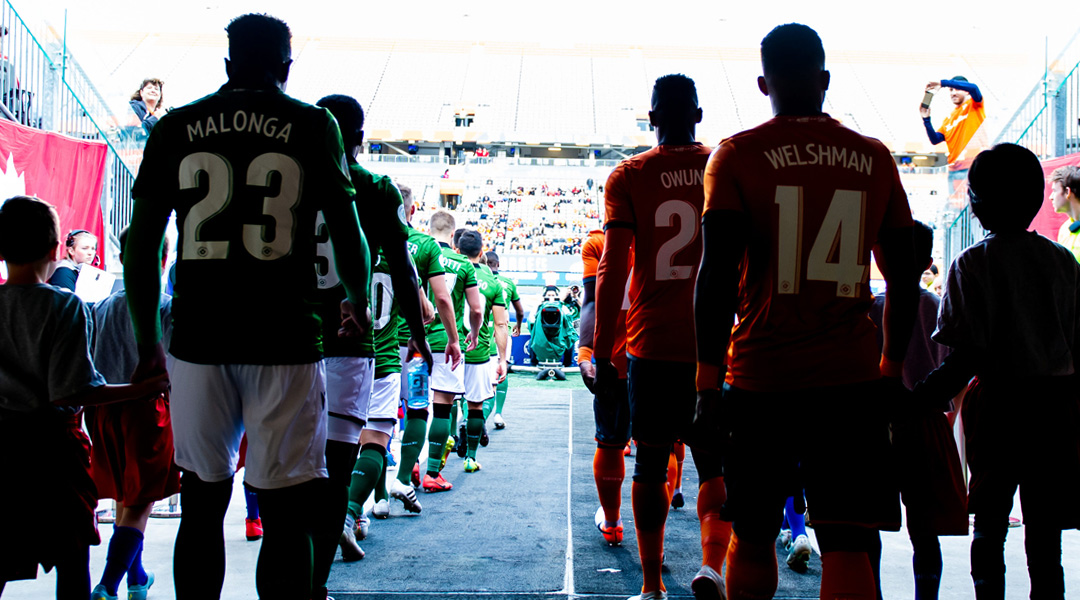 Fans who tuned in to see Hamilton-based Forge FC take on league-leaders Cavalry FC in Voyageurs Cup action last night witnessed something special: the birth of what may be the league’s best naturally-developed rivalry.

Technically, both Forge FC and Cavalry FC already have their own local derbies. Forge FC has the 905 Derby against local neighbours York9 FC, while Cavalry FC has the Al Classico with FC Edmonton. Both of them paled in comparison to what fans witnessed last night.

Cavalry FC went into the second qualifying round of the Canadian Championship undefeated after seven games in all competitions. During the club’s first visit to Tim Hortons Field some three weeks ago, Tommy Wheeldon Jr.’s side stole all three points with a last-gasp winner. It left a sour taste in Kyle Bekker’s mouth, and he rallied his team to put together a winning streak in response.

With both league-topping sides just one home-and-away matchup from facing Major League Soccer opposition in the Canadian Championship, last night was bound to be one full of emotions. This was more than just a Canadian Championship match: Forge wanted to prove that it could compete with the best, and Cavalry wanted to keep the current status quo in place.

Forge FC started well, with creative attacking play from goal-of-the-month winner Tristan Borges and the quick feet of Emery Welshman giving Cavalry Vice-Captain Mason Trafford cause for concern in his debut match. Welshman would go on to bag his second goal of the season in the 48th minute, but that’s when Cavalry FC really started to create several chances of their own.

As the second half entered added time, both sides continued with the back-and-forth action as Cavalry FC etched closer to its first-ever defeat. Then, in the 93rd minute, absolute drama took over the Forge FC penalty box.

The ball fell to second-half substitute Jordan Brown, who’s high kick appears to have come dangerously close to Kyle Bekker’s head. The mis-struck ball looped high in the air, and Cavalry standout Nico Pasquotti got his head to it. The ball flew forward to Congolese striker Dominique Malonga, who then had Forge FC keeper Quillan Roberts barrel into him. Malonga went down in a heap as Forge cleared the ball.

The referee had seen enough. It was a penalty, and Roberts became the first Canadian Premier League goalkeeper to get a red card. Forge felt – strongly – that play should have stopped after the high kick from Brown. It took 3 minutes for the referee to sort out what would happen next.

Forge FC Midfielder Alexander Achinioti-Jonsson donned Roberts’ goalkeeper kit to go between the sticks and face the penalty, while Malonga stepped up to take it. He struck left, and that’s exactly where Achinioti-Jonsson dived. He didn’t dive far enough. Malonga’s shot struck the back of the net, giving Cavalry both a crucial equalizer and the lead on away goals. It was, more or less, the last kick of the match.

When the whistle blew, the drama didn’t stop. Borges had a heated exchange with Malonga, which was only made worse as unused substitute Triston Henry barreled in screaming. Both sides came together in an explosion of angry shouts, pushes, and uncontrolled rage.

There’s no doubt that Canada Soccer will have to take a look back at the event and see if any retroactive bans will need to be put in place. With Welshman due to miss the away fixture due to Gold Cup action, the hammer face enough of a tough away trip as it is.

As the referees tried to stop the on-pitch fighting, Gareth Wheeler commented, “boys – there’s a match next week”, and it’s certainly going to be a heated one. In Forge FC and Cavalry FC has come the natural birth of what may be the league’s best rivalry. There’s going to be no love lost between the two, especially now. The coaches will call for cool heads to prevail, but these memories won’t be easily forgotten.

The two sides have been the best Canadian Premier League teams right out of the gate, and there ultimately hasn’t been much to separate them when they’ve come face-to-face: Forge FC had the chances to win during both of their meetings, but nobody has found a way to force a win like Cavalry FC.

There’s little doubt that the next match between them on Tuesday, June 11, will see plenty of fans tuning in to watch the drama unfold. The drama will extend to the league later on in the month too, with a CPL matchup between the two clubs on June 22 giving Forge a chance to play catch-up in the league table.

From what we’ve seen from the pair so far, it’s certainly the best rivalry yet – and nothing gets curious Canadian fans looking into a new league like hearing about this kind of thing.