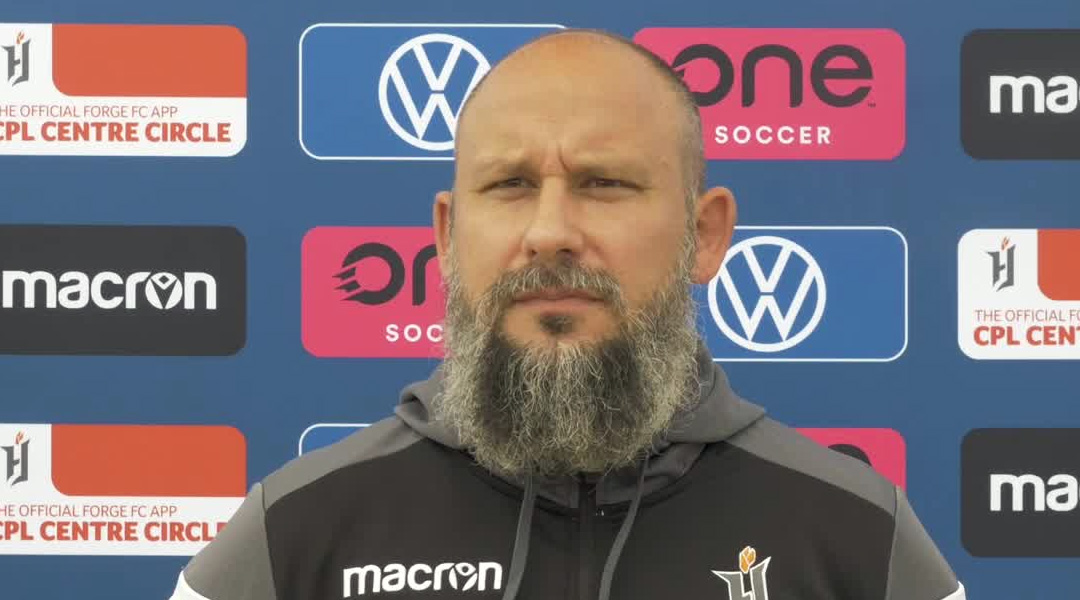 Speaking with members of the media one day ahead of the season’s opening match, Forge FC gaffer Bobby Smyrniotis says that his squad is ready to go out and get things done in Charlottetown, PEI.

The reigning Canadian Premier League champions will undergo a seven match regular season schedule, with the league opening up the Charlottetown-based festivities by having Forge FC square off against last year’s runners-up in Cavalry FC.


Like the other seven Canadian Premier League clubs, Forge FC will be jumping into competitive action after a very non-traditional preseason: the club saw its early preseason plans nixed with the arrival of the COVID-19 pandemic, with the squad being unable to train for a significant period of time. When training eventually resumed at Tim Hortons Field, municipal health regulations only allowed for individual sessions at first and, eventually, small group exercises.

Recognizing that each club has only had two or three weeks of full intra-squad training ahead of The Island Games, Smyrniotis expects that the league will take a couple of games to fully hit its stride not just physically, but also tactically:

There’s a lot to see there for us and the coaches in those first few games. You hope that your processes go as you please and they’re smooth, but for some teams it may take a couple of games to actually hit the stride that the coaches are looking for. In an event that’s very short, we’re looking at seven games in four weeks in the first round, that’s the importance of making sure that the processes are there from the beginning.

The head coach noted that he’s been studying how the MLS Is Back tournament has progressed, and much like Eddies gaffer Jeff Paulus, believes that squad depth will play a big role in the 2020 Canadian Premier League season. To that end, he noted that all twenty-two members of the club’s roster are fully fit and available.

The Cavalry FC roster is, in turn, also reporting in at full health.


Last year saw Forge FC play second fiddle to Cavalry FC in the spring and fall seasons. That brings some added pressure for the league’s opening match, though Smyrniotis isn’t worried about the individual piece of his seven match regular season:

I think you have to be good over the duration of these games. One things I always preach is not to get too high when things are going well, and not to get too low when things don’t go well. For the long-term, that is very important. You look at our season last year, in the first two weeks we lost eight points in the season, and after that we amassed the most points from the second week of the season until the last game of the season as a team.

After reflecting on the inaugural campaign, Bobby Smyrniotis shifted direction to indicate that the club isn’t paying any stead to last year’s results while in Charlottetown. From his perspective, the only thing that matters is what happens at UPEI Alumni Field for the next month or so:

To be honest, I think 2019 is done. What was done back then, it was something special for us and we will always have that as in our back pocket as being champions of this league, but 2020 is a different season. It’s a different season, it could be different tactics from teams, different individuals. If you look at Cavalry, they’ve lost some very influential players in their team that were there last year which could fundamentally change the way they go about some of the things that they do. We know they’re a team that’s going to work hard on the pitch, and I think even work harder coming into this game.

While the reigning champions will be entering the season without CPL MVP Tristan Borges, Smyrniotis stated that he believes his current roster features players capable of stepping up to fill the void that Tristan has left in midfield. He also believes that Belgian midfielder Paolo Sabak is in for a great restart to his career, though fans can expect to see him occupy a more attacking role than Borges did. All-in-all, Bobby indicates that if the club loses a player of Tristan’s caliber every year in the transfer market, it means the CPL side is in a good spot and doing things right.

The side also recently brought in former Toronto FC striker Mo Babouli, who had previously trained with York9 FC. When OneSoccer analyst Gareth Wheeler inquired about his fitness, the gaffer confirmed that the club is happy with where Babouli was at. Smyrniotis had made it no secret he was looking to add a finishing touch to his attacking third several months ago, with the head coach stating he’s confident that Babouli will be a very good addition at the CPL level, and one who provides a new dimension to the club’s attacking third, too.

The club gaffer also noted that his side’s approach to games doesn’t differ much by opponent, with Forge FC focusing on its own playing philosophies first and foremost, with some minor training adjustments based on who they’re facing. To that end, Smyrniotis believes that the turf pitch at UPEI Alumni Field is of good enough quality to continue playing the ball on the ground in the side’s traditional style. While he admits the size isn’t what they’re used to at Tim Hortons Field, he’s satisfied with the pitch overall. The league, meanwhile, appears happy enough with the floodlights to switch tomorrow’s match to an evening time slot.

Forge FC will kick off The Island Games tournament against Cavalry FC tomorrow at 8:00PM EST. The match will be streamed live exclusively on OneSoccer, which also announced plenty of additional content and cast additions to support its CPL coverage. Today, CBC Sports announced it will also be broadcasting eight CPL matches from the regular season, too.