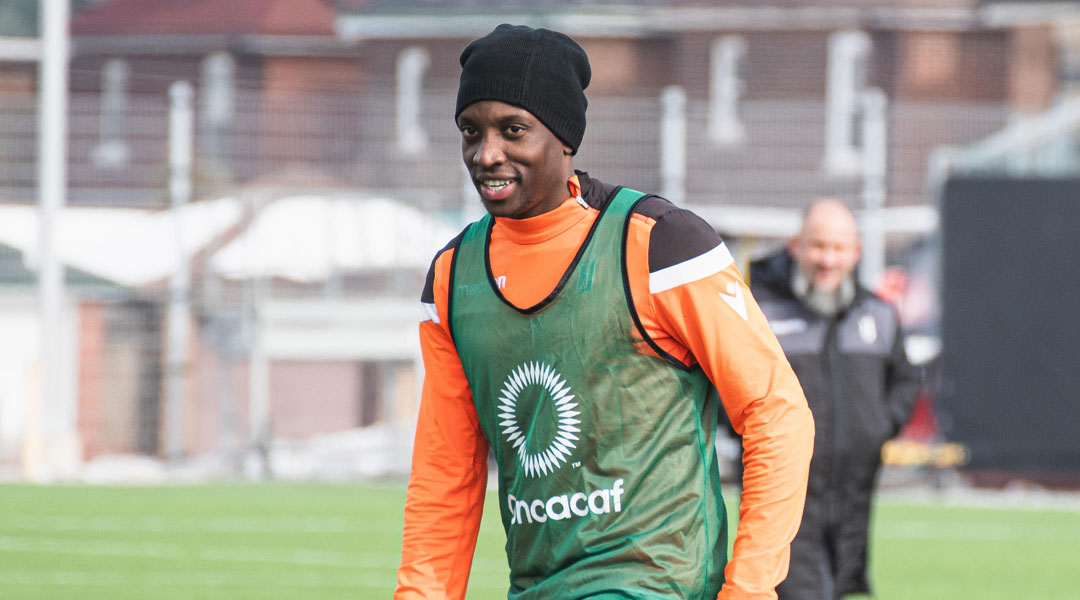 The Forge FC midfield got a sizeable addition with Aboubacar Sissoko, who returns to the Canadian Premier League after a season spent stateside with Indy Eleven.

The 26-year-old midfielder had proven to be a CPL standout during his rookie season with the Halifax Wanderers in 2020, where the six-foot-one talent featured in all but one match as the east coast side reached exceeded expectations to reach the 2020 CPL Final.

After that, he made 21 USL appearances for Indy Eleven before signing for the hammers earlier this month.

Now settling in with a squad preparing to make its Champions League debut in just a matter of days, Aboubacar is taking things one day at a time and appreciating the moment.

“It’s something to enjoy,” he says of the continental match, “it might be one of the best games we’ve ever played in our lives. We just need to get there, enjoy the game, respect the opponent, respect the game plan, and work hard as a team.”

Preparations for the fixture began weeks ago, with Forge FC undergoing closed-door friendlies against the likes of Vaughan Azzurri, Syracuse University, and York United ahead of its Champions League debut. Preseason has gone well under the watchful eye of Bobby Smyrniotis, and Sissoko says they’re approaching the game well.

“The system is right, and everything is good. As a team, we try to work hard everyday, and improve our games and prepare for every match like it’s a final. We’re having fun, and with the team the spirit is good,” he says.

Aboubacar is no stranger to Forge, having trialed with the side after being selected by them in the inaugural CPL-U SPORTS Draft. It didn’t work out at the time, but that’s no sweat to the midfielder. He learned a lot from the experience, took that with him back in university, and won the U SPORTS Men’s Player of the Year award.

What followed was a whirlwind season that saw him turn professional with the Halifax Wanderers and undergo a trial with the Whitecaps. He’s thankful for his time with both sides, having used that momentum to launch a late-blooming career that now sees him land with the two-time league winners as a high-profile midfield addition.

For me, 2020 was the fastest year I’ve ever seen: I came from university to my first pro contract in the CPL and a trial with an MLS side. Every moment of every day I had there allowed me to become the player who I am now: calm, confident, and always keeping working. You never know what will happen tomorrow, so you need to live day by day, hour by hour, and second by second. That’s my mentality, and we just keep working hard.

The motto of living each moment to its fullest comes from a tragic background: his father passed quite suddenly almost ten years ago, and his mother – who had always picked him up in the low moments, like when he was first cut by Forge as a trialist – also passed away suddenly in 2020.

Many would have folded under the weight of that. Sissoko went on to have a highlight season, and he says he carries on each day to do the memories of his parents proud. That’s why he lives in the moment: he knows how quickly things can be taken away.

“You have things like this that happen in your life,” he reflects, “you just have to be the same person, try to work hard, and try to make your parents and the people you love proud. My personal motivation every morning is to try to make my Mom and my Dad proud, and my siblings too. I don’t have time to cry and stay home, I improve, work hard every day, and try to achieve my objectives. I am a happy person and I enjoy every moment on the pitch, because life is fast – you just need to enjoy every moment you have.”

The next week will include a particularly big moment for Sissoko: while he wasn’t on the preliminary Champions League registration list for the side, he’s expected to be registered now that the Canadian FIFA transfer window is open and his ITC can be processed. It’s a similar case for Ashtone Morgan, who made his professional debut in the premier continental competition back in 2010.

The opportunity comes as the next step in what has been a rapid rise for his professional career: just over two years ago he was a U SPORTS standout who then he turned professional, trialed with an MLS side, and has now played in both Canada and the USA. Jumping into the Champions League is the continuation of his upwards trajectory.

He also arrives as a more complete player after his time with Indy Eleven, where he was deployed as both a six and an eight. He admits his role in Forge is a better fit for him, and he believes the club can elevate his game to the next level.

True to his live-by-the-day mantra, he isn’t keen to discuss what may be next for him. He’s enjoying the moment as it comes.

“I’m just working day by day, and we’ll see what happens,” he concludes, “if you achieve success, opportunities will happen.”