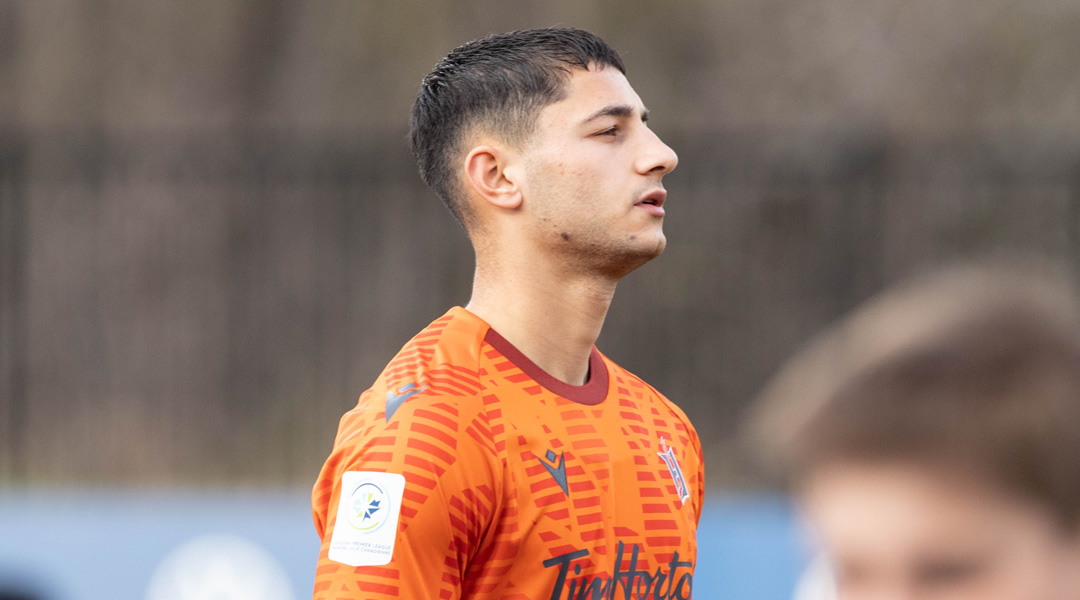 Alessandro Hojabrpour has done it again.

The 22-year-old scored the opening goal for three-time champions Forge FC last night, cementing himself in history as the first player to score in back-to-back CPL Finals, ensuring both himself and long-time teammate Terran Campbell became the first athletes to hoist the North Star Shield for two different clubs.

Not bad for a Burnaby-born youngster who was plying his trade in a Bulgarian side’s youth squad when the CPL was kicking off.

To say he’s an unlikely hero for two straight championship finals isn’t wrong, but it may undersell his value as a defensive midfielder: his time in the Canadian Premier League has seen the former Pacific FC man develop a strong, physical side to his game to compliment an excellent technical and positional sense, forging him into a young but key CPL athlete with his best years still ahead of him.

It’s been quite a journey for Hojabrpour, who developed with the Whitecaps Academy before testing himself abroad in 2017. The birth of the CPL saw a casual text from James Merriman eventually land him with Pacific FC in 2019, where he eventually broke through as a starter for the rest of 2019, 2020, and his title-winning 2021 campaign.

It was last year where Alessandro Hojabrpour really made waves, starting in the CPL Final against Forge FC and scoring a set piece header to win the title. If that sounds familiar, that’s because he did the same thing last night – but this time, he did it for Forge rather than against them. He also landed the league’s Best U-21 Canadian Player of the Year award last year, too.

Just one month after celebrating Pacific’s title win and a few days after his 22nd birthday, the shock announcement of Hojabpour’s free transfer to Forge FC turned heads. The move was leaked by a salty-sounding note from his former club, but Alessandro wasn’t looking back: he had come to the decision after months of thought, describing the move to Hamilton as the ‘best for his career‘.

In light of last night’s final, it seems to have been an astute decision from the 22-year-old.

Head coach Bobby Smyrniotis showed a lot of faith in Alessandro right from the get-go, handing him his club debut in a Champions League tie against Cruz Azul just one month after he’d signed on. Hojabrpour quickly settled in the middle of the park, securing a starting role for a high-expectation Forge side with his first goal in orange coming in some fashion against league rivals Cavalry FC.

While it’s no secret that Alessandro has great attacking qualities to his game, it’s his ability to help cover defensive duties while maintaining Forge’s dictation of the game from the centre that brought him to Hamilton. With the midfield missing out on Kyle Bekker last night, there were a lot of eyes looking at the middle of the park wondering if Atletico Ottawa could capitalize on the captain’s absense.

While that proved to be a non-factor, Alessandro’s own influence in last night’s final cannot be understated: he was pivotal in helping cover the wide areas to stimmy Atletico Ottawa’s own buildup, but also contributed immensely to Forge’s attack with 14 passes into the final third and, of course, his immaculate propensity to be in the right place at the right time when it matters the most.

“It feels amazing, amazing, amazing!” he exclaimed to Kristian Jack last night following the second title-winning goal of his young career. “I owed one to Forge, I’ll say that.”

With just about 15,000 spectators taking in the scenes at TD Place last night, Alessandro Hojabrpour and his teammates certainly put on a clinic: running out two-nil victors in a contest that swayed largely in their favour following his go-ahead goal, the three-time champions made it look easy when it wasn’t.

We penned a piece last year about his unlikely path to being in the right place at the right time for Pacific, and now he’s only gone and done it again for Forge. Having suited up 33 times for the newly-minted league champions this year, he’s been one of the best examples of how the Canadian Premier League can help nurture and develop what was previously a largely untapped market of young domestic talent.

Having signed with Forge on a multi-year deal, Canadian Premier League fans will be lucky to enjoy talents like Hojabrpour while they’re here. If he returns to European football in the years to come, he’ll now be doing so as far less of an unknown.