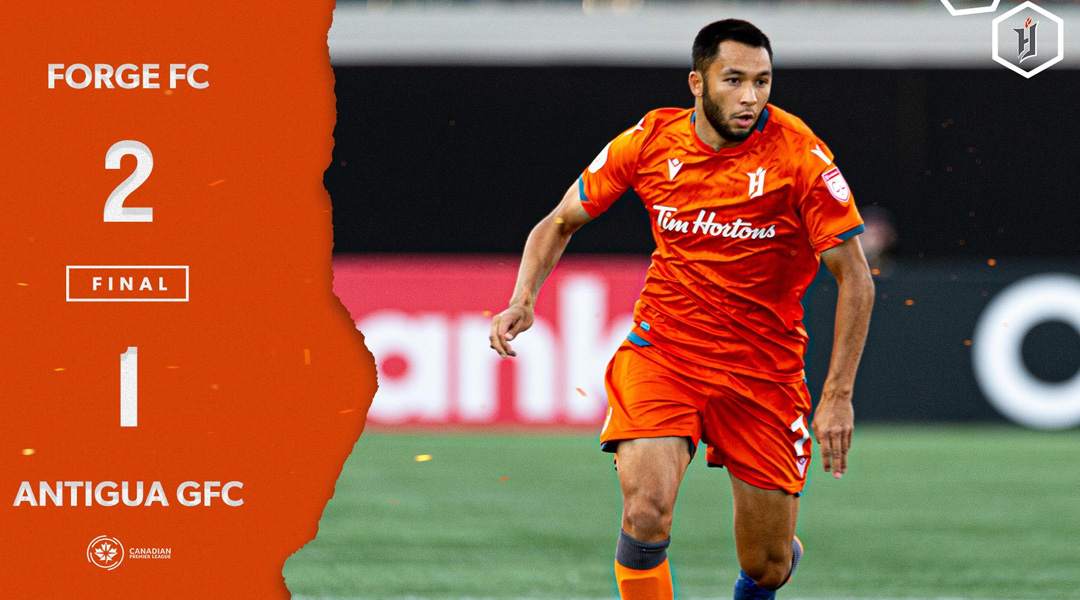 In an evening of historic action, Hamilton-based club Forge FC beat Antigua GFC 2-1 at Tim Hortons Field to mark the club’s first foray into CONCACAF League action. Today was the first time a Canadian Premier League club has played in the continental competition, which put an air of excitement and uncertainty around the mid-week CONCACAF League qualification match.

The Hamilton-based club left it until the game’s dying minutes to take the lead, finishing with a narrow 2-1 win that will have left CPL fans happy. There’s still an away leg to play, of course, but the club is off to a promising start.

The Hamilton-based club had qualified for the tournament by beating out Valour FC and FC Edmonton via the trio’s head-to-head CPL spring season results. Next year, the CONCACAF League entrant will be determined by who is the reigning champion of the Canadian Premier League itself.


Antigua GFC had the better of the opening chances, with Costa Rican forward Anllel Porras and Guatemalan midfielder Jairo Arreola becoming big problems for Forge FC goalkeeper Triston Henry. Despite the eagerness of the duo, it would be former Tigres man Edgar Pachecho who scored the first goal of the match, chesting down a failed clearance and firing an absolute rocket that dipped into the corner of the net.

Antigua had earned itself the away goal. Forge FC needed to respond.

Whatever Forge FC head coach Bobby Smyrniotis said to his squad at half-time, it worked: the Hamilton-based club would get its first-ever CONCACAF League goal just two minutes into the second half, courtesy of a close-range Krutzen header following a corner kick from Bekker.

What followed was a hotly contested second half: both sides had chances, with another Forge FC set piece resulting in a near-miss from Tristan Borges, who would also test Antigua GFC shotstopper Luis Moran later on. The visitors would almost score a sure-thing when the ball dropped to Pablo Aguilar in the 77th minute, but a last-gasp block from Owundi kept the scores level.

Just as the fourth official had raised a sign to indicate that there would be three minutes of added time, 22-year-old substitute David Choiniere made a darting run to slot the ball beyond the Antigua GFC goalkeeper. The excited celebrations from the Forge FC squad said it all: this was a big moment for both the club and the league.

The match leaves Forge FC head coach Bobby Smyrniotis with a lot to think about: while players like Welshman, Borges, and Choiniere shined for the Hamilton-based club, the squad’s defensive performance was less than convincing – which may prompt some modifications to the lineup for the squad’s away leg next week.

With Forge FC now having an advantage going into the second leg, it’ll be interesting to see if the club opts for a defensive approach in Guatemala. Despite the 2-1 win, the club knows that if it concedes a single goal that the advantage goes back to Antigua GFC. Bagging an away goal, on the other hand, leaves Antigua with a lot to do.


North American clubs haven’t historically fared well when it comes to away CONCACAF games, so it’ll be interesting to see how the first-ever Canadian Premier League club in the competition fairs overall.

Fans will also be crossing their fingers that Welshman’s rumoured transfer to Isreali club Hapoel Haifa won’t materialize in the near future. Given that the MLS transfer window closes on August 7, if such a transfer is going to take place, it’s going to be before the away leg.

Update: The next day, Welshman’s loan with Forge FC came to an end!


At the end of the day, the scoreline has been kept tight: anything is on the cards for the away fixture. Forge FC represented the burgeoning league very well and got the result today, but as is expected in anything’s inaugural outing, there’s still room for improvement.

Fans can tune into the away leg when Antigua GFC hosts Forge FC on Thursday, August 8, 2019 at 8:00PM EST. The match is expected to be available on TSN Direct.