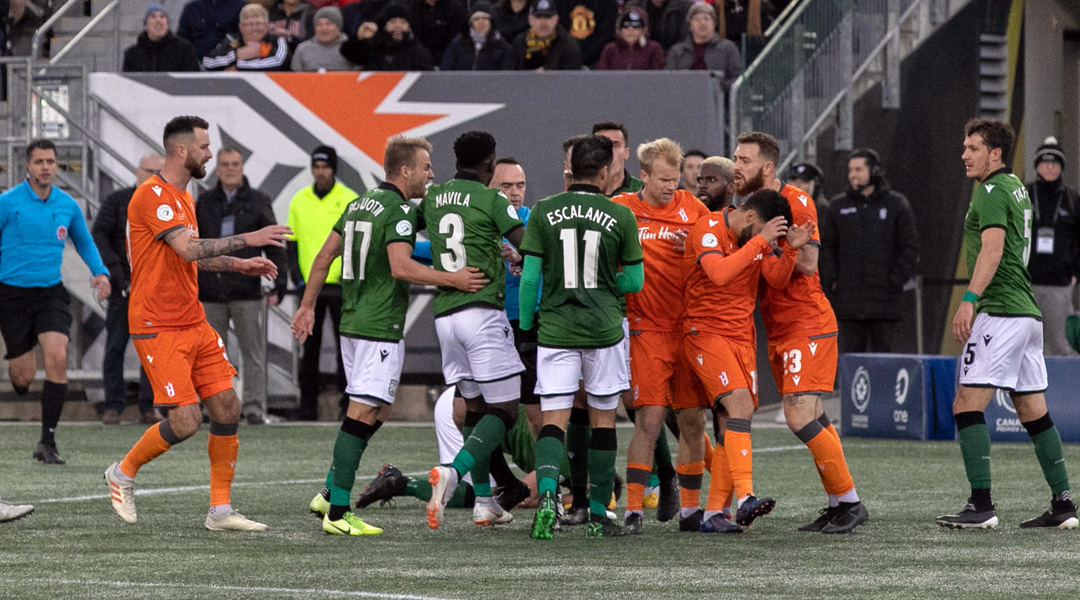 The first leg of the Canadian Premier League finals may have had pyrotechnics in the pre-game ceremonies, but the real fireworks came on the pitch: the match would see the referee give out two red cards, both of which could be considered very harsh calls.

Today, OneSoccer reporter Louis Butko has confirmed that Forge FC will be officially appealing the red card that was handed out to attacking midfielder Tristan Borges in the 69th minute. The midfielder had gone in for a fifty-fifty challenge against Cavalry FC defender Jay Wheeldon, with the referee evidently seeing a retaliation that he didn’t like: Borges got a straight red as players from both teams surrounded the referee.


It’s not currently known if Cavalry FC will be appealing the red card that went to Joel Waterman: his defensive slide to prevent a Borges shot in the box had a very clear handball, though it remains up for debate whether a yellow and a penalty kick would have been a fairer response. Waterman’s hand trailed on the pitch behind him as he slid, though whether this was intentional or not is up for debate.

Tristan Borges would be a big miss for the Hamilton-based club in the second leg, where a resolute Cavalry FC is confident that a home crowd can push them to do what they always seem to do: find a way to win, even when the odds are against them.

Borges has scored thirteen goals in both league and postseason matches for Forge FC this year, and is currently on course to win the golden boot – provided Dominique Malonga doesn’t net two in a potential Cavalry FC comeback.


Canada Soccer is expected to respond to the appeal in the next few days. Given how heated the matches between these two sides are, it wouldn’t be surprising if the second leg features even more red next week.

The second leg will play out at Spruce Meadows on November 2, with OneSoccer providing a subscriber-only livestream of the historic match that will include pre-and-post game coverage. CBC Sports will also broadcast the game, albeit on a tape delay.