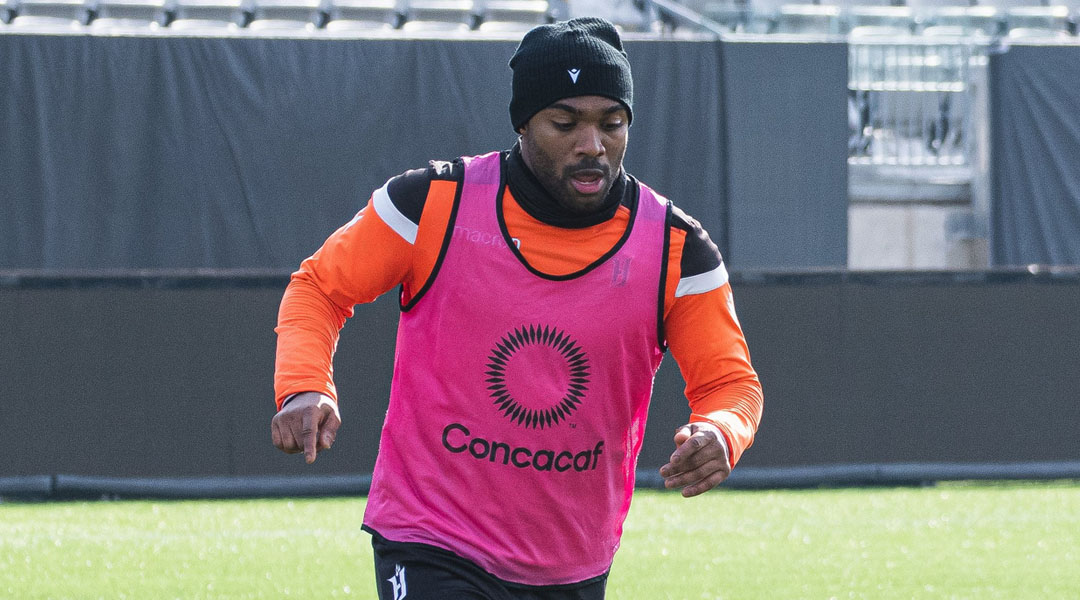 The 31-year-old arrived to Tim Hortons Field as a high-profile replacement for Kwame Awuah, bringing eleven seasons of MLS experience with him. A veteran of continental action, he’s exactly the type of player that Forge FC will be leaning on if it’s to provide any upset against Liga MX giant Cruz Azul.

Speaking with Northern Tribune, Ashtone is happy to think back on where everything started to where he is now, with the left-back keen to add more medals to his collection as he helps the next generation of players forge their own path in Hamilton.

On A Likely Champions League Debut

Ashtone Morgan is expected to make his Forge FC debut this evening, prompting a big sense of deja vu: his professional debut with Toronto FC came in the same continental competition twelve years prior, with Ashtone ultimately going on to impress and earn a first team contract with the MLS side.

While many of the Forge originals are now continental veterans themselves, Ashtone has ample experience to put on offer for the young members of the squad: with 22 Concacaf Champions League matches under his belt, he’s had even more experience in the premier continental competition than Omar Browne, who made a name in North America for his standout performances against Morgan’s boyhood club several years ago.

“I have a lot to offer the young guys in an event like this,” he says, “and being around the other guys on the team definitely injects some energy to me, and it gets me excited to show up every day.”

While his new team is raring to go, Liga MX giant Cruz Azul will still step onto the pitch at Tim Hortons Field tonight as heavy favourites. That just makes Morgan amped for the game, though.

“It gets me excited for a match like this,” he admits, “anything happens in football. I know Cruz Azul is the big team around our region, but we’re excited to continue our journey as a young club. We know it’s not gonna be easy: it’s gonna be really tough game for us, and we’re gonna make it even tougher for Cruz Azul.”

The hammers underwent preseason preparations with friendlies against Vaughan Azzuri, Syracuse University, and York United ahead of the big night, which comes as the first match of a two-legged affair.

“The level has been superb, and I’ve really been enjoying it,” said Morgan of the preseason camp. The left-sided full-back has a playstyle that lends itself well to Bobby’s possession-based approach, which features a lot of high-pressing. “Coach Bobby challenges us to be the best we can, and it’s a great, beautiful style of possession football. It excites me, and I enjoy it.”

Morgan has always kept a close eye on the Canadian Premier League, and had also remained close to his old Toronto FC teammate Kyle Bekker. He’d been impressed with the tactical prowess shown from Bobby Smyrniotis, and already knew the lay of the land in Hamilton through his maternal family roots: he may be called Mr. Toronto by the TFC faithful, but he has a lot of familial ties within the ambitious city.

“There’s a lot of connections and a lot of attraction to Forge,” he summarizes, “with all of the great things they’ve accomplished in their short spell of being a professional club, it’s an exciting team.”

The left-back is eager to kick off his Forge career, starting it the way his TFC career did: a high-profile continental competition.

“I know the expectations of those Wednesday night matches, and I’m really excited to get going. It’s a big match for ourselves, for the club, and the entire city of Hamilton.”

On A Toronto FC Reunion

Ashtone had always wanted to be a one club man, though Mr. Toronto’s time with his hometown club ended after nine seasons.

With the 2020 Canadian Championship Final set to take place later on this year, Ashtone knows that he’ll be tasked with competing against his boyhood club this season. The 28-year-old enjoyed a nine year spell with Toronto FC, where he made history as one of a select few athletes to make over 150 appearances for the club.

“I’ve seen the cup final on the schedule, and I have that match circled on the calendar this summer. It’s my boyhood club since I was sixteen, so I’m very excited for the match. It’s great for Forge to go against such an established Canadian side and allow ourselves to measure up and flex our muscles a bit at Tim Hortons Field.”

On His Two Seasons Stateside

Morgan left Toronto FC as one of its most celebrated athletes, a hometown kid who made it at the professional level and helped establish the culture of the club both on and off the pitch. His time in Utah proved difficult, though testing himself in a new environment allowed him to learn a lot more about himself both as a player and as a person.

Making things more difficult was the outbreak of the COVID-19 pandemic, which meant that his first steps playing away from home without his family meant he really, really had to learn to be comfortable alone – something which got tricky at times.

“I came out of it on top,” he assures, “I think playing with RSL with a new team and environment helped me grow as a person, as a human, and as a footballer. Still, I’m definitely happy to be back on this side of the border and continuing life with my family.”

Morgan arrives to Forge FC as one of its biggest winners: the 31-year-old has collected four Canadian Championship wins from his time with Toronto FC, and was with the club for its historic treble in 2017. He arrives to Tim Hortons Field with a winning mindset and the expectation that more medals will be earned.

“That’s the plan,” he states, “I’ve seen the way the last season ended. Now we’re trying to strengthen the squad, sharpen up, and learn from that last final to regain the title for 2022.”

With Forge FC in three competitions this season – four, if you count two different Canadian Championship tournaments – the potential for Ashtone to add to his trophy cabinet is certainly there.

Of course, Morgan is busy off the pitch, too: he’s about five months into the launch of a Toronto-based venture called Sonndr Cafe, which has unsurprisingly proven to be a popular stop for several Toronto FC members. He’s also looking forward to resuming his duties with charity organizations like Regent Park United.

“I’ve been in and out of the city and the country, but we try to raise money for kids in Regent Park to come and play for free. We provide boots, shin pads, and make this environment for them as professional we can, and give everybody the experience to come out, play, enjoy themselves, and have some fun kicking the ball.”

On The Growth Of The Game

When Ashtone Morgan made his TFC debut, he was one of only a handful of academy products who could make the step up directly into first team Major League Soccer action: there was no CPL back then, and there weren’t many domestic options for athletes trying to break through from coast-to-coast.

Now set to begin his twelfth season as a professional, reflecting on the state of the game from where it was when he began to where it is now is a breathtaking experience for the veteran left-back.

“Having a league to call our own is amazing for all the young footballers coming up. When I came up through the academy, there were only a few outlets and a few split opportunities for us to even get a nod at first team football.”

The Canadian Premier League will kick off its fourth season on April 7, with eight teams in the mix. While Vancouver, Saskatoon, and Windsor-Essex sorting out stadium grounds, there are many more ownership grips looking to launch teams, too. The momentum is churning forward in Canada’s favour, though Morgan says the hard work must continue.

“It’s been a fight, and it was a fight, and it will continue to be a fight. There were many friends who started off with me in football, and if the CPL was around back then maybe many more careers could have flourished and stayed alive. I think it’s great, I think where we are now and seeing all the young talent and players go overseas and actually leaving their mark has been exciting for myself, and also for the younger generation coming up who will be a part of history and grow into professional players themselves.”

With Ashtone arriving on a multi-year deal, the left-back will have ample opportunity to impress at Tim Hortons Field. He’ll have to hit the ground running if he’s to make a mark against Cruz Azul, but he’s always proven to be up for a good burst of speed.

After all, that’s how his professional career got started: a midweek Champions League match at home. It was the bright start of a new chapter back then, and football is often cyclical.