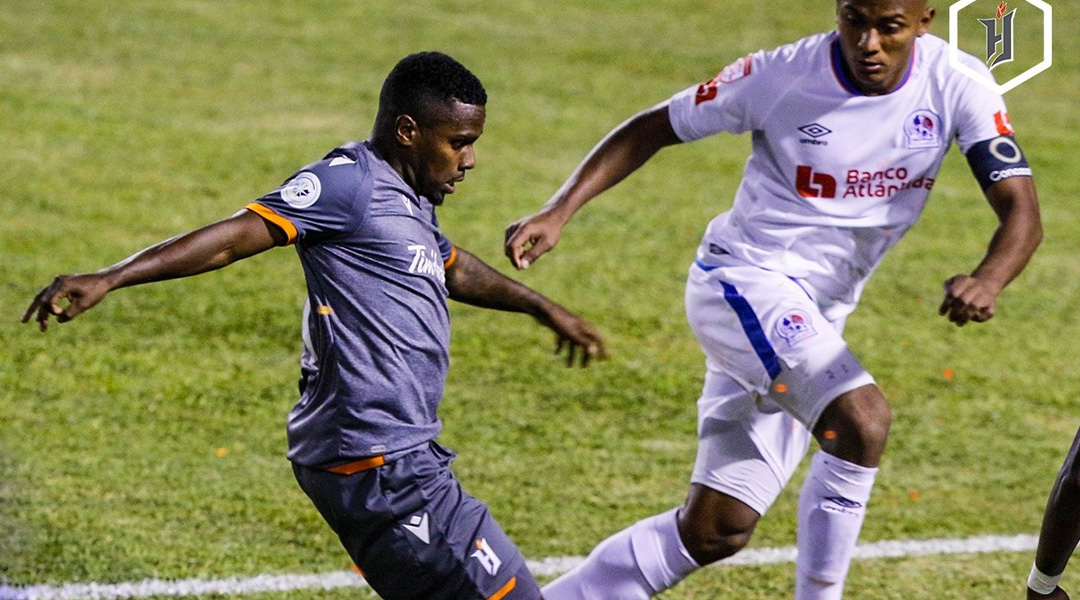 Recap: Forge FC Fall To CD Olimpia 4-2 On Aggregate In CONCACAF League Round of 16

Forge FC played the second leg of its CONCACAF League Round of 16 matchup against CD Olimpia tonight, with curious spectators tuning in to TSN2 to watch a Hamilton-based side that had secured a 1-0 home victory over the reigning Honduran champions last week with no less than ten Canadians playing throughout the game.

The closed-door affair of the Honduras-based away leg would see CD Olimpia dictate the tempo right from the first whistle, with the club finding the back of the net after just nine minutes. The play was called offside by a match official, though replays showed that it may not have been the correct decision.


Against the run of play, Forge FC right-back Jonathan Grant – who scored a delightful goal against CPL spring season winners Cavalry FC last weekend – made some space for himself and put in a low cross from the wing, with former League1 Ontario golden booter winner Anthony Novak finding himself on the end of it. The ball was blocked, however, with CD Olimpia quickly getting it to the other end of the pitch.

CD Olimpia’s right-back had a chance of his own, too: Brayan Beckeles struck a fine volley from outside of the box in the 21st minute that curled just around the net. Some ten minutes later, CD Olimpia would make the dominant performance count when a curling cross into the Forge FC box wasn’t properly dealt with, resulting in a quick lofted ball that found Argentinian defender Jonathan Ferrari unmarked. His headed effort beat Triston Henry, tying the match on aggregate with the home side securing a 1-0 lead.

Forge FC found itself stuck in the bad habit of some meaningless possession, routinely bringing the ball forward only to find the ball easily intercepted by a CD Olimpia squad that came back in numbers. Before the second half could come to a close, a defensive clearance from Forge FC rolled outside of the box to 23-year-old Honduran international Deybi Flores, who fired an absolute right-footed rocket that flew straight past Triston Henry to give the home side a 2-0 lead and the aggregate advantage.

The second half would see CD Olimpia continue to dominate, with Borges collecting a yellow in the 53rd as he conceded a freekick near the edge of the box.

An absolute blast from a CD Olimpia player in the 55th minute pinged off the post beyond the outstretched arms of Triston Henry, with the ball rocketing back off his head moments afterwards to go out of play. Forge FC found itself on a rare counter moments later, failed to make it count, and saw itself forced to defend moments later: suddenly, the action was end-to-end.


Sensing that a change was needed, head coach Bobby Smyrniotis – who collected a yellow for his reaction to CD Olimpia’s first goal – made the first substitution of the match in the 57th minute, with David Choiniere replacing Tristan Borges. He nearly made an immediate impact, taking a strike from outside the box that rolled just agonizingly wide of the CD Olimpia net.

He’d be part of another positive piece for Forge FC against the run of play, slotting the ball in to a darting Jonathan Grant to win the away side a corner. The resulting set piece would see a loose ball that eventually resulted in a blocked shot, with Forge FC unable to match the clinical fishing that CD Olimpia displayed on the night.


A quick counter-attack from CD Olimpia would see Benguche supply a delightful through-ball to Guity, who rounded a rushing Henry near the edge of the box but saw a heavy touch take the ball out of play. Moments later, Choiniere carved out a great chance for the away side as he darted into the box, cut inwards, changed direction, and found his shot blocked at the last moment.

CD Olimpia nearly bagged a third in the 73rd minute, with a chipped effort clipping off the top of the crossbar after Henry was caught a bit off his line. Unfortunately for Forge FC, the Honduran champions would score a third in the 75th, with CD Olimpia beating the Hamilton-based club’s offside trap to supply a good cross with a solid finish from Lacayo.

A failed block from Krutzen moments later would lead to an open net for former Philadelphia Union DP Jerry Bengtson, who would have otherwise been offside. He backheeled the free ball into the net to give CD Olimpia its fourth on the night as Krutzen looked at his laces in frustration.

The Honduran champions almost bagged a fifth moments later, but struck the post from close range. CD Olimpia substitute Jose Reyes played a pass to himself in the 82nd, firing a shot that Henry spilled outwards. The resulting follow-upshot rolled just beyond the net, with the Forge FC defense finding itself split open by the minute.

The away side would get a consolation goal in the 88th, with Forge FC striker Anthony Novak supplying a sharp cross to David Choiniere, who had previously stated he was enticed to join Forge FC for the chance to score goals in continental competition. His goal against Antigua GFC is what got Forge FC to the Round of 16 to begin with, so he’ll exit this year’s tournament with two goals to his name.

Despite a strong home performance, Forge FC succumbed to a tough 4-1 away loss – though the hammer can take some solace in the fact that it’s not the only North American club to find itself on the backfoot in a tough CONCACAF environment. It’s par for the course, if you will.


Even though the Hamilton-based club succumbed defeat in the away leg of the CONCACAF Round of 16, it certainly did the Canadian Premier League proud during the club’s first foray into the continental competition. If there’s any other silver lining that Bobby Smyrniotis takes away from the result, it’s that Forge FC can now solely focus on remaining the top side in the CPL fall season table. With the club having five games in the next 22 days, there won’t be much time to dwell on tonight’s loss in San Pedro Sula.