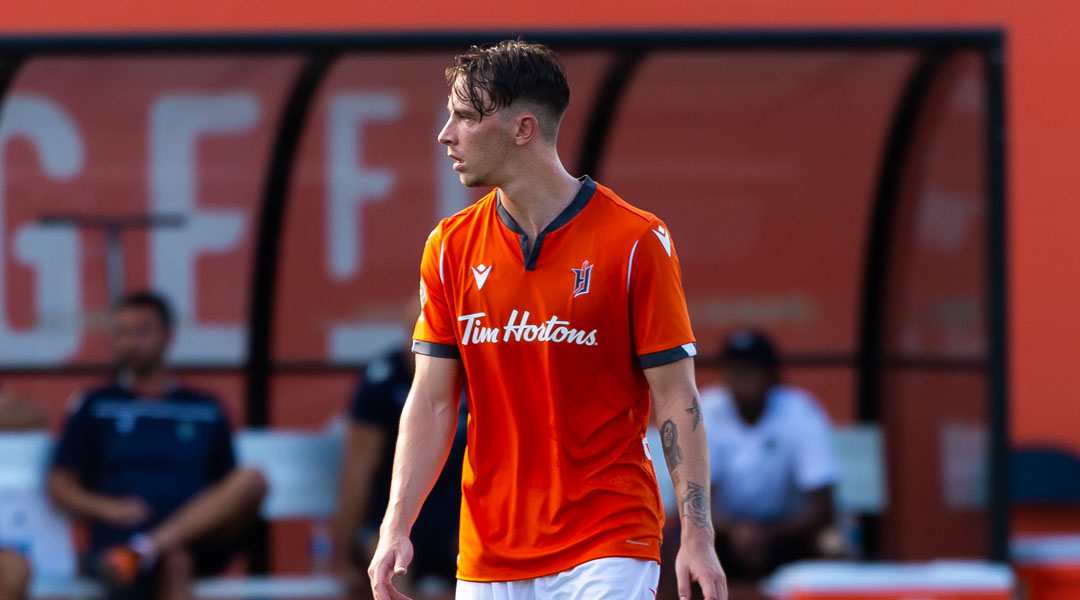 Krutzen On ‘Raising The Bar’ With Forge FC

In a recent CanPL video interview with Charlie O’Connor-Clarke and Kristian Jack, Forge FC defender Daniel Krutzen has reflected on his time with the club, his coach, and the winning culture of Forge FC.

The 25-year-old has firmly established himself to be a key player for the hammers, making 76 all-time appearances for the league’s reigning (and only) champions thus far. 2021 has seen him feature in 27 of the side’s 39 matches, though it remains to be seen if he’ll be a part of number forty – the 2021 CPL Final – after picking up an injury against FC Motagua last week.

Whatever happens next, Krutzen remains very positive about his club’s chances of domestic success. With Forge FC on the cusp of a domestic three-peat, he says that the expectation is there for the side to keep raising the proverbial bar.

I think there’s a huge motivation in this team to keep doing better and better every year. We talk about it in the locker room quite often, doing better every single year, and I think we’ve done that for the past three years, raising the bar a little bit every single year and advancing to more rounds in more tournaments and we keep playing those games and keep winning. We have so much motivation in this whole time.

Krutzen has been a leader on the pitch, helping organize a defensive back line that was expected to have a big reinforcement in Dejan Jakovic this year. When injuries curtailed his season five matches in, Krutzen and Samuel held down the fort instead.

29 league matches later, Forge FC officially conceded the least goals out of any team in the league, with Forge also being the only side to concede less than one goal per game to boot. Finishing top of the league in a congested regular season schedule, the side also came one penalty shot away from a Canadian Championship Final and one match away from a Concacaf League Final, too.

“I think we were up for the challenge,” he put simply, “and we’ve shown that throughout the season.”

The 2021 season had kicked off with an intense schedule back in June, with the bubbled segment of the season seeing clubs play just about every three or four days. Krutzen picked up a knock and missed a spell during that time before jumping right back in as a starter. “There was no time for preparation,” he reflects, “the games just kept on coming and coming.”

His third campaign for the reigning champions wasn’t always a certainty, with the 25-year-old having shopped himself over in Sweden during the offseason. Forge re-signed him in February, where he’s continued to be influential on both ends of the pitch. Having contributed eight goals and three assists in a Forge shirt, he’s the biggest offensive contributor who regularly starts for the Forge backline.

Forge head coach Bobby Smyrniotis has done a stellar job keeping the core of the squad together over the last three years, with Krutzen counting himself among several players who had been there from the get-go. Born in the Netherlands but growing up in Belgium, he developed with the KRC Genk Academy under former Forge assistant coach Peter Reynders. Upon rejoining him in Hamilton it didn’t take him long to quickly establish himself as a league-leading defender at the CPL level.

After you are part of this team for 2-3 weeks, it is like you’ve never been anywhere else. It’s such a tight group of guys, and everybody can talk to eachother and handle eachother. It’s easy to become a part of this team, especially, because they’re so welcoming and that’s been a huge part of Sigma in the past years and decades, and that’s the culture of this team that makes it possible for other guys to come in and be a part of it immediately.

Krutzen noted that he’s seen plenty of year-over-year improvements at the club, where a hectic forty-match season has seen strong additions like Garven Metusala and Woobens Pacius make names for themselves. The club also leaned on its Sigma FC roots, with players like Sebastian Castello among several teenagers to get play-time this season.

This culture of success has led to ample chatter that head coach Bobby Smyrniotis deserves a call-up to a higher level of play, especially now that he’s guided the hammers to Champions League heights. Krutzen had plenty of praise for his gaffer, stating that it has been amazing to work with him over the last three seasons.

He is so prepared for everything, it is amazing how much he knows about the game and how versatile he makes us as a team. Whenever there are injuries and suspensions, there is always a way to correct it, improve, or adapt to what we have to do. The scouting of the opponent is always very important. We always have a style of play, but we always like to adjust three to four little things based on how the opponent players, and he has very good insight for this.

Like many international signings, the defender spent his first two seasons living in Hamilton with teammates, but now lives in Toronto with his significant other. Like York United’s Chrisnovic N’sa, the draw of living in a big city Toronto and the quality of life in Canada have proven to be big draws.

Obviously, living in a big city like this is very attractive. I love everything about it, it’s the big city, it’s the whole country, it’s the people, it’s the way you guys do things here. I find it very nice to be living in this country.

While Krutzen still occupies an international slot on the club’s roster, that may change in the near future: he told Kristian Jack that he’s filled his application for Permanent Residency, which would switch his status to a domestic athlete per CPL roster rules.

This suggests that he’s keen to remain with the hammers for the long-term, though what ultimately happens this offseason remains to be seen.

I’ve been ambitious since the first day I got here. I think the abilities are there and I think people know that, but at the same time I’m very grateful for the opportunity to have played here for Forge and still play for them and keep that going. We’ve won trophies before in the past two seasons, and we’ll try to do that again this year, and raise that bar every single year.

Whatever happens next, it’s clear that the 25-year-old has already played a big role in the first steps of both Forge FC and the Canadian Premier League. With Krutzen having featured in every single minute of the club’s other CPL Finals appearances thus far, he’ll be a big miss if he spends Sunday on the sideline – though Forge FC have shown plenty of adaptability under similar conditions before.

“I’m grateful to be an important part of that and to see not only the club but the league grow in this country, and it’s been an amazing ride for the past three years,” closed Krutzen, “I’m excited to see what’s next.”