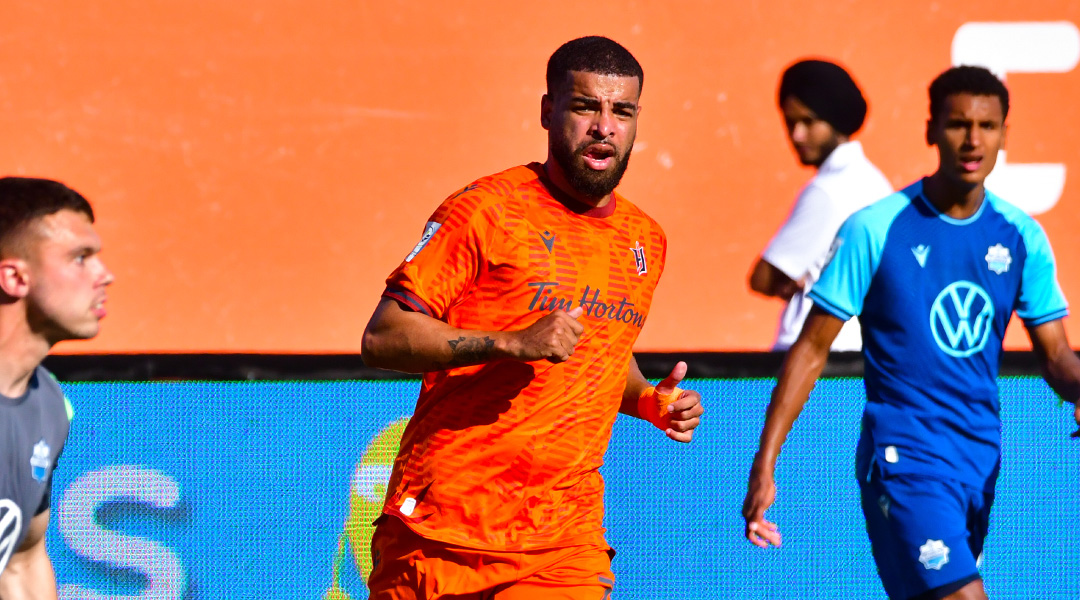 When Jordan Hamilton signed with two-time Canadian Premier League champions Forge FC, the reaction was dynamite: Forge fans were celebrating online, while fans of other clubs shook their heads in disbelief: ‘the rich get richer’, was the sentiment online.

So, how did the hammers – the most successful team in the history of the league and the current first-placed leader – land the highly-coveted Canadian free agent?

For Hamilton, the answer on was simple: they win trophies.

“Once you taste gold, it’s all that you want,” he told Northern Tribune. “If you look in the past three years, and not even just the championships that Forge has won, but the big games that the CPL has been apart of whether that’s against MLS or Liga MX, it’s consistently been Forge. It’s hard to turn that down, especially when they’re really pushing to get you.”

Forge weren’t the only club in the running for Hamilton, of course, with Cavalry and Halifax having also reportedly reached out. He was flattered by the interest, but says it was really always going to be Forge for him – and, to the surprise of nobody, it’s not that other teams haven’t been trying since 2019.

He just wanted to wait until the league had proved itself a little more the timing felt right.

Hamilton describe the Canadian Premier League as an intriguing destination that offers a lot. The facilities have impressed the well-travelled striker, along with the steady rise of the league’s quality of play. He’s kept a close eye on it as it’s grown year-over-year.

Hamilton can only laugh about his previous call-out on the quality of CPL refereeing now that he’s going to share a pitch with them – thems the breaks, as Boris Johnson would say.

Hamilton’s return to Canadian soil comes not long after what he described as an enjoyable stint with Sligo Rovers that simply didn’t pan out. Before Ireland, Hamilton’s only club experience outside of North America had been a short loan stint in Portugal, and that was almost eight years ago. The urge to test himself abroad, however, had always and still remains.

“It was pleasant,” he reflects on his Irish chapter, “I honestly didn’t know what I was in for. I got a call from a coach who was interested in bringing me over. They were playing Europa League, and I figured…you know what? I want to go test myself in Europe.”

His test started off well, with Hamilton bagging a goal and two assists from his first four matches. After that, however, the club parted ways with the coach who brought him in, and the shake-up saw Hamilton opt to exit in the upcoming transfer window.

Still, he got a taste for playing against teams who had Champions League and Europa League experience, and he’d love to springboard himself back to that. A long-term deal with Forge allows him the platform to turn a few heads and make that move happen, just like we’ve seen so many times already this season.

“The long-term deal means a lot to me. I’ve been signing one-year deals for the past, say, four years. I really want to give my best effort to help the city of Hamilton continue to win trophies…I can’t just say win trophies, because they’ve been doing that. It’s continue to win.”

Hamilton knows a thing or two about being in those winning environments: he picked up several Canadian Championship wins with Toronto FC, where they also hoisted the Supporters Shield en route to an MLS Cup win. He was then traded to Columbus Crew, where – despite a dip in playing time – he picked up another MLS Cup.

“I always have such a great love for TFC,” he adds, “I still go to games. I was a fan before I was a player. I understand the business of what happened [with his sale], but I always have love for them.”

Hamilton has seen a big shift in the Canadian soccer landscape since he fought to break through the youth ranks in his own teenage years, describing the opportunities available back then as ‘almost non-existent.’ In those days, the MLS saw being a 23-year-old just out of college as young, and that kind of mentality saw Hamilton endure a five year gap between his first preseason as a 15-year-old and his full club debut.

Things thankfully skew younger in MLS now, especially after Alphonso Davies. In CPL circles, you can dial that youth focus up up to eleven.

“Forge has a bunch of very, very good young players,” says Hamilton, “Castello is very talented, Kwasi Poku has really impressed me…Metusala is very good, as is Malik. There’s a lot of quality in CPL for young players, and maybe these are guys who get overlooked to go to college, and in the past aren’t the one or two guys who would make TFC, Whitecaps, or Montreal.”

It’s fair to say the youngster have one of the best coaches looking out for them, with Bobby Smyrniotis and his brother Costa having been involved in shaping several Canadian stars to date through their time with Sigma FC. Jordan is familiar with them, even from back then.

“Let’s just say they were really trying to get me to Sigma instead of TFC Academy,” he says with a laugh. The Smyrniotis brothers have known him since he was a kid, with Bobby’s first coaching job having him oversee Hamilton’s brother on a rep soccer team. As Jordan says, they’ve got deep roots.

That was then, and this was now. Hamilton now slots into an incredibly deep attacking line-up, though he’s confident in his own ability to carve out gametime. He’s scored goals at every level he’s played at, he points out, and even states he believes that’ll be tenfold under Bobby. Cementing his point, he scored in his next match after this interview.

“If you look at the goal differential in the league, Forge is miles ahead of any other team, and that’s from creating chances for their forwards,” he adds, “for me getting minutes, that’s a coaches decision that is out of my control. What’s in my control is training everyday and how I play when I get my opportunity, which I’m very confident in.”

Hamilton wants to set a good tone with Forge and help the club pick up trophies and, moving forward, get back into the continental swing of things that saw them face Liga MX competition earlier this year. As he says, it’s all about the taste for gold – and to him, Forge offers the clearest path to it.

“There’s just there’s just nothing that compares to winning a championship. So I just want to put myself in the best position for me personally, and for my team’s success. And I think that Forge is the answer to that to that equation.”