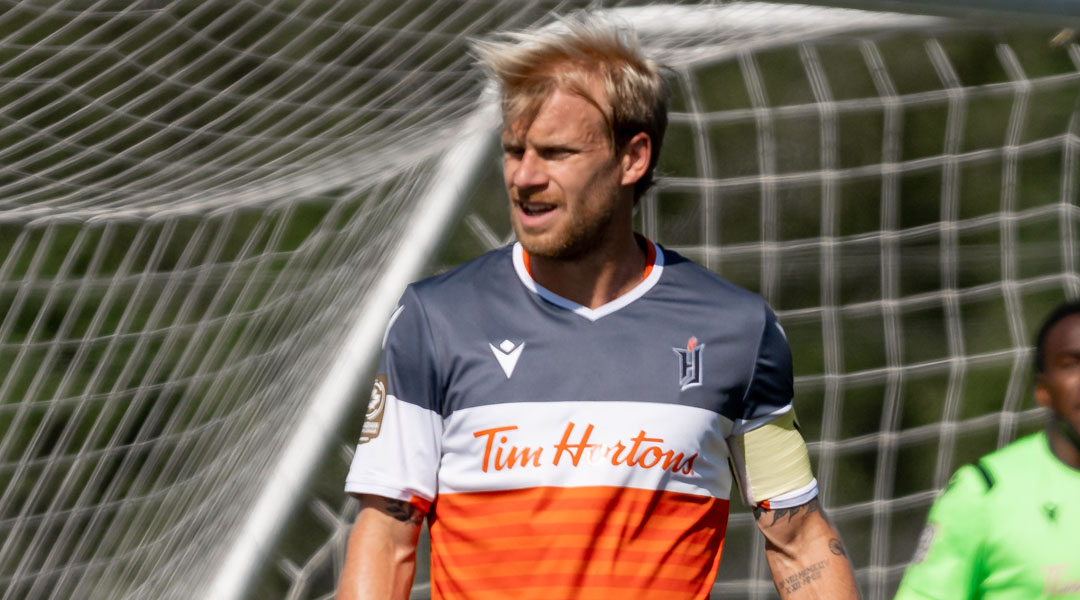 With Forge FC Captain Kyle Bekker now returning to the Hamilton-based side for at least one more year – and expectedly longer – he has his sights firmly set to improve the standards of the reigning champions once again.

With the side having come one match away from Champions League qualification just months ago and with a domestic cup final on the horizon, that’s certainly a task easier said than done.

The 30-year-old midfielder first arrived to the Canadian Premier League side as one of the league’s first player signings, signing a two-year deal with Forge FC in late 2018. While nothing is ever certain with the launch of a new professional sports league, he says the intention was always for him to be here for the long term.

The reigning champions have now locked Bekker into a new deal that secures his services ‘for the foreseeable future’, though the Hamilton-based side didn’t provide further clarity on the contract length. When asked about it, Bekker suggests that it’s simply a good chunk of time and that he could even see himself retiring at the club, though he recognizes the realities of the sport and says that actually doing so isn’t set in stone.

In our sport, nothing is guaranteed. Things change, and they can change quickly. I’m happy here, and I want to be here. Ideally I can see myself ending a career in a Forge shirt and I think that’s something that I want to work towards.

He also touched on the rumours that Vancouver Whitecaps head coach Marc Dos Santos was interested in bringing him to the Vancouver Whitecaps, stating that the club had never approached him and that he simply remained focused on the CPL season and is fine with the move not materializing:

For something to come up and really shake that up, it would have had to have been very spectacular. I never really paid too much mind in following up on the stuff flying around. If they wanted to reach out to me, they could, but I knew my heart and my mind was set.

If there were any outside pressures on Bekker during this year’s Island Games, the former national team midfielder didn’t show it: Bekker scored four goals across all eleven league matches for the side, hoisting the North Star Shield for a second year running and winning the Canadian Premier League’s Most Valuable Player award for his high-impact performances.

The midfielder then played in all four of the club’s belated Concacaf League fixtures, where the side pushed further than it had in the previous season and came just one match away from qualifying for Champions League action. While Bekker described his time with the club as a bit of a fairytale so far, his appetite for silverware isn’t over. In fact, it’s only gotten bigger:

We want to continue to have success, so obviously the league is a big one again. We have a fantastic opportunity with a final against TFC, which is another big moment for the club and the league. Concacaf League, we obviously had a good run, but with the way it ended, funnily enough, we’re disappointed about that. It was anti-climatic. I think we all agree that we should have gone further.

The club had two opportunities to reach the premier continental competition, falling to an agonizing quarter-final penalty shootout defeat against Haitian side Arcahaie FC before succumbing to a 1-0 loss against CD Marathon in the Champions League play-in match.

Forge will have another crack at the continental competition this year by virtue of having won the CPL in 2020. Head Coach Bobby Smyrniotis can certainly start the new season with his head held high, having won the club’s second title, surpassing expectations in continental action, and securing a Voyageurs Cup Final for the team, too.

With all that, Bekker still isn’t quite sure how the Forge gaffer didn’t win coach of the year:

I don’t understand how a guy who’s won back-to-back finals in the first two seasons of the league’s existence doesn’t win the coach of the year. To do it in the first year with a whole Canadian attack, with some of the pundits to the league saying it couldn’t be done, and we only went it did it. To come back and do it again, and then have the run that we had in Concacaf, it just doesn’t…it is what it is. I guess we’ve got to be Canadian and spread the wealth.

Bekker has seen his fair share of high level coaching, having plied his trade for Major League Soccer sides Toronto FC, Montreal Impact, and FC Dallas before his season in the NASL with Marc Dos Santos and another year in the USL Championship. The Forge FC gaffer is one of the best, Bekker says, with Smyrniotis creating a clear club identity, raising the side’s standards each year, and bringing plenty of ideas to the table day-in and day-out.

This has translated into the success that we’ve had on the field. He’s a guy that I’ve known a long time, and that’s a big thing that got me towards this process in regards to working with a coach like him.

Smyrniotis is now at task to keep the core of the defending champions together and finding a replacement for now-retired defender David Edgar, which is no small feat. His centre-back partner Daniel Krutzen just wrapped up a trial period in Sweden, suggesting that players now in free agency are showcasing themselves to other sides with a resume now bolstered by a second league title.

Still, Smyrniotis believes he can keep the core group together and sprinkle in a few new players that will elevate the club’s level of play even further.

Whatever signings the club makes, Bekker believes the new goal for the club is to qualify for the Champions League. In the inaugural campaign they surpassed expectations by just being able to beat continental opponents at all. Last year saw them go further, winning the Round of 16 against Tauro FC before ultimately falling just short of Champions League qualification. The side must, Bekker stressed, keep improving on its results year-over-year:

That has to be a goal we set. Just as we’re looking at what we’ve done and what we want to achieve, we’ve set the standard and that’s as far as we’ve gotten in that competition, so how do we beat it and come back at the end of the year and show we’ve grown from the previous season. That’s going to continue to be the goal as we try to push the envelope and keep setting those standards for ourselves, and in doing that representing our league and our country.

While Forge FC has had less of an offseason than any other Canadian Premier League clubs due to long periods between some of its Concacaf League fixtures after the CPL season had concluded, Bekker describes the side’s current offseason as a solid break away, and is already looking forward to coming back to camp to instill the Forge FC mentality on whatever new faces are brought in.

As for the returning roster members, Bekker believes they will have been made better players by having undergone a long and tough season during the COVID-19 pandemic, which involved plenty of quarantine, long hotel stays away from family, and a lot of training before playing must-win Concacaf League matches overseas behind closed doors.

We had a very different year last year, on paper we didn’t play as many games as we would have in a normal season, but at times if you asked a bunch of guys it would’ve felt like playing for an eternity in just that couple of months, the way the preparations were set up where you play one game, train, play another game, in and out of quarantine, being away for extended periods of time, it was a whole other aspect of the game. I think the guys who got through that will have the experience for long, grueling seasons which is great and something we’ll be able to lean on in the future as we move forward.

Forge FC has only announced the return of Bekker and Golden Glove winner Triston Henry so far, so there are still a lot of unknowns when it comes to the Hamilton-based side’s roster. Those details will have to be sorted out sooner rather than later, especially given that the club’s belated Canadian Championship Final against Toronto FC is likely to take place before the Major League Soccer season kicks off in April.

As a former TFC player himself, Bekker is looking forward to showcasing the league’s talent in the historic match, which will be mark his fiftieth appearance for Forge FC:

It’s going to be a great experience. Playing against a former team brings that little extra, but that’s not necessarily the driving force behind it. It’s another step in the journey we’re taking as a club and a team, and the opportunity to come out and compete against a fantastic squad in TFC with big name players and the success that they’ve had is an unbelievable opportunity.

The inaugural Canadian Premier League season saw Forge’s rivals, Cavalry FC, take the spotlight in the competition when they became the first CPL side to beat MLS opposition, something which York United came a single crossbar away from against eventual winners CF Montreal. The domestic cup puts a lot of eyes on the clubs participating in it, which Bekker says brings plenty of opportunity for both greener players and veterans to showcase themselves.

For the younger kids in our team who are kickstarting their career, what better opportunity do you want? You want to test yourself and put your name on the map, but that’s not taking away from a game where I want to have a very good performance in. Obviously, it would be a dream start to the season if we can get a result in that game. If we can go out, put a shift in and play the way that we can and stay true to what we’re doing, we’ll show that we can compete on that level.

All-told, the fact that Bekker is talking about going out and defeating a side which features a salary cap several times higher than his own club’s says a lot about his winning mentality. Having added two league titles to his trophy cabinet since arriving to Forge, the thirty-year-old midfielder is certainly ready to keep raising the bar for both himself and the side he leads.

Whether Forge FC is able to reach the Champions League heights Bekker says they ought to have reached last year remains to be seen, but one thing is certain: as the proverbial standard bearers of the league, CPL fans from coast-to-coast will be rooting for the club when its third-ever Concacaf League campaign kicks off later this year.

Forge FC did not disclose the length or financial details of Bekker’s contract with the club.