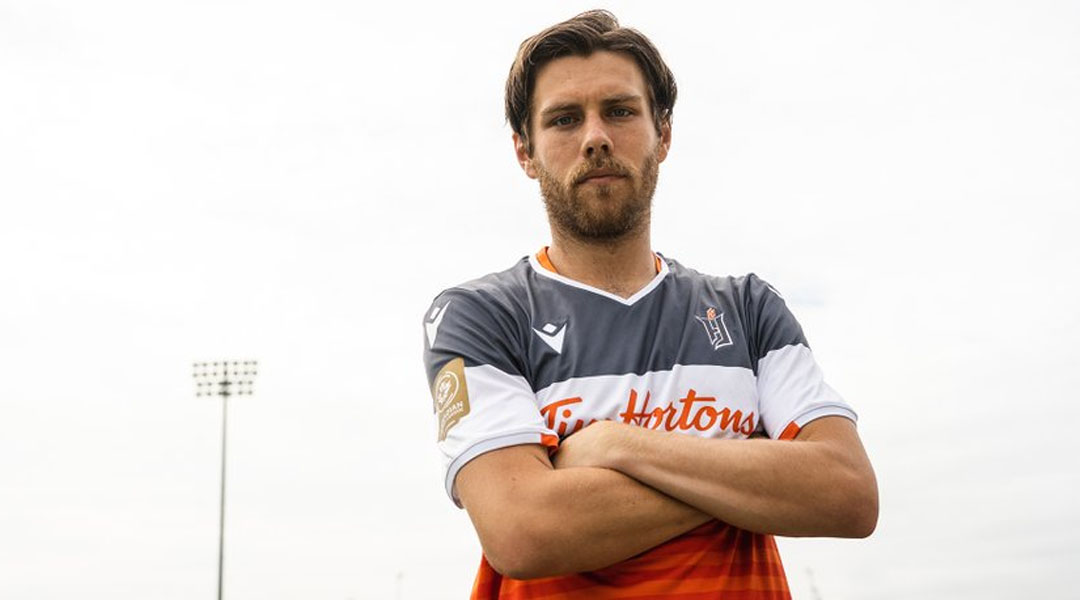 Maxim Tissot has gone through a lot since 2018: he suffered a serious knee injury that took longer than expected to recover from, his former club Ottawa Fury folded, and then he endured a bumpy offseason that featured plenty of uncertainty, contract breakdowns, and a global pandemic.

Now, the 28-year-old is dressed in Hamilton orange and ready to help the North Star Shield holders retain the title at The Island Games. The 2020 Canadian Premier League season will take place in a bubble tournament in Prince Edward Island, and the return to competitive action represents a bright light at the end of what has been a very tumultuous tunnel for Tissot over the last few months.

Tissot revealed that he thought he may be facing an early retirement as his offseason stretched on, but things quickly fell into place when Forge FC contacted him in late June. Before that, however, things weren’t looking good:

At the start of the year, the former Montreal Impact full-back had been rumoured to be a target of Cavalry FC (who eventually signed another Quebecois full-back in Mohamed Farsi), and when Atletico Ottawa came to town he made it no secret that he’d like to stay close to home. What seemed like a match made in heaven wasn’t to be: “It’s fine,” says Tissot, before stating that there’d be an extra spark in him when he had a chance to play against the expansion side.


With Giuliano Frano having quietly departing from Forge FC, the North Star Shield holders announced Tissot’s arrival just over a week ago. His initial invitation was less of a trial, he says, and more about catching him up to speed and getting him match fit. The Quebec-born defender had done a lot of running in the past few months, running a half-marathon and using the fitness app Strava in friendly competition with friends and athletes to keep motivated. He also played a fair bit of tennis, testing his knee with quick movements, and he’s happy with the result: he says he’s probably as fit as he’s ever been coming into a preseason.

Much like David Edgar – who came to Forge FC after having endured a slow recovery when he injured his knee as the victim of a hit-and-run accident – Tissot had struggled to recover from a serious knee injury of his own in 2018. While players with similar injuries were able to fully extend their knee after a period of 3-6 weeks, Tissot wasn’t quite there six months after it happened. It took him over a year to come back, and he says those days are now firmly in the rearview mirror.

Since I’ve been back, I have to pay more attention to it, but I feel great. My body feels good overall, and my knee feels very good. I’m 100% ready.

It was only last July when Tissot gradually found his way back in to the Ottawa Fury roster, featuring mostly as a substitute but earning more minutes as the club’s final season wore on. He proved to be a threat against CPL opposition in the Canadian Championship, coming on against the Halifax Wanderers and firing the match-winning goal beyond Jan-Michael Williams.

Tissot’s time with the Montreal Impact in 2013-2016 saw the full-back score goals from both runs inside the box and, ocasionally, a few well-placed rockets from outside of it. If he fits into the system like how he expects to, Tissot is hopeful of adding a few more memorable goals to his tally while he represents the hammer.

They play a style where the fullbacks are very implicated in the attacking play. Hopefully, I can get a couple. That would be nice. It’s all about helping the team and what Bobby wants from me, whether that be as a fullback or in another position. I will just do my job and try to contribute offensively.

While Forge FC’s own announcement of the player describes him fully as a left-back, Tissot reveals that his positional duties within the squad are still to be determined: training sessions at Tim Hortons Fields are testing him out in different spots, with the CanPL Editorial staff suggesting that Tissot is most likely to slot in at left-back, with Kwame Awuah then playing more centrally like he did with MLS side New York City FC.


It’s been a long road for Tissot, who says that the Canadian Premier League makes the pathway to professional action much more endurable for domestic players nowadays compared to when he signed his first professional contract seven years ago. Back then, he says, if a domestic player wasn’t part of Montreal, Toronto, Edmonton, or Vancouver, they were forced with the extremely difficult of breaking into the roster of a foreign side where being Canadian was a disadvantage.

In this platform now, the CPL is such younger league but it’s such a good platform for these young players that we kind of lost back in my age, where at 18, 19, 20, if you didn’t sign for any of those four teams you were kind of done or you were a few steps behind if you wanted to go to Europe, because it’s difficult. Having that platform now with CPL where those players who don’t sign with MLS teams, or can’t, it gives them helpful minutes to play and it can go a long way.

Like David Edgar or team captain Kyle Bekker, Tissot recognizes that his MLS experience will mean he’s expected to lead the younger players by example. He’s not expecting to jump into such a role right away, stating he’ll slowly and gradually become more comfortable in saying what he thinks to all of the players.

Having arrived to the reigning champions with a trophy cabinet that includes two Canadian Championships and an NASL trophy that he won alongside Kyle Bekker, he says adding another cup would be the perfect compliment for his return to professional action – though he recognizes that other sides will want to show up against Forge FC even more after their dominance in the 2019 season.

I think it’s the same way for every defending champion: teams want to beat you, and they’re the team that they want to beat the most, the team they show up for the most, so I’m looking forward to that. With us having pretty much the same group and adding a couple extra players, I think we have a good shot at going for the title again this year.

The side recently announced the signings of CPL U-SPORTS Draft Pick Gabriel Balbinotti, former Sigma FC goalkeeper Baj Maan, and ex-Chattanooga FC defender Jordan Dustan. As spotted in a recent Forge FC training clip, it looks like Smyrniotis will also announce the signing of former Toronto FC striker Molham Babouli in the near future, too.

With twenty-one players currently on the books, Tissot is expected to feature prominently as the hammer prepares to defend its title glory. While he says the prospect of presently-delayed continental cup action didn’t factor into his signing with the club, it could lead to another opportunity for future silverware. There’s also the Canadian Championship, which could see its first round play out in Prince Edward Island once the CPL season concludes, too.

Forge FC did not disclose the length or financial details regarding Maxim’s contract.